“It’s going to be an operation unlike anything this city has seen,” Colonel Heckman said.

AS US and Iraqi military commanders launched the first stage of a new security plan to tackle violence on Baghdad’s streets, the Bush Administration’s “surge” of American troops was facing stiff resistance at home.

Although the first phase of the plan will mainly involve Iraqi forces, several Republican senators dealt a blow to the authority of the US President, George Bush, by backing a motion condemning the decision to send 21,500 additional US troops to Baghdad.

The operation splits the city into nine districts, with a detachment of 600 US troops assigned to each district to support thousands of Iraqi soldiers. In recognition of Baghdad’s division between Sunni and Shiite Muslims, two Iraqi generals will oversee operations on either side of the Tigris River.

A US adviser to the Iraqi army, Colonel Doug Heckman, said the military would mount a visible troop presence unparalleled since the overthrow of Saddam Hussein. “It’s going to be an operation unlike anything this city has seen,” Colonel Heckman said. 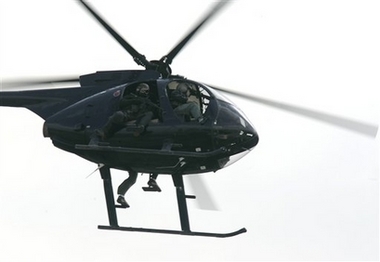 A helicopter owned by Blackwater USA, a private security contractor, flies over central Baghdad, Iraq, Wednesday, Feb. 7, 2007. After numerous denials, the Pentagon has confirmed that Blackwater USA, a private contract company from Moyock, North Carolina provided armed security guards in Iraq under a subcontract that was buried so deeply the government could not find it. The discovery shows the dense world of Iraq contracting, where the main contractor hires subcontractors who then hire additional subcontractors, and each company tacks on a charge for overhead, a cost that works its way up to U.S. taxpayers. (AP Photo/Marko Drobnjakovic)

Armed contractors working directly or indirectly for the U.S. government have been involved in killing Iraqi civilians and they have escaped the rule of law

Lawyers for Blackwater, the private security company, today publicly acknowledged that one of their security guards shot dead an Iraqi man whom he worked with.  “He was off-duty that day,” said Andrew Howell, the company’s general counsel told a Congressional hearing today. “We brought him back to the States the next day and took him off the contract.”

The story of the killing, which took place on December 24, 2006, was first broken by Bill Sizemore of the Virginian Pilot less than a month ago.

The admission by Blackwater’s lawyer came at a hearing that was convened by U.S. Congressman Henry Waxman at the House Government Reform Committee.

Blackwater, a North Carolina company, became famous when four of their contractors were shot and killed in Fallujah in March 2003, sparking a massive U.S. military assault on the city in which hundreds were killed. (Excellent accounts of this incident can be found in Robert Young Pelton’s new book: “Licensed to Kill” and Jeremy Scahill’s forthcoming book: “Blackwater: The Rise of the World’s Most Powerful Mercenary Army.” out later this month from Nation Books) The company was back in the news ten days ago when five of their employees were shot down as they accompanied U.S. embassy employees in Baghdad.

The admission by Blackwater confirms worries that armed contractors working directly or indirectly for the U.S. government have been involved in killing Iraqi civilians and that they have escaped the rule of law in Iraq or in the United States. 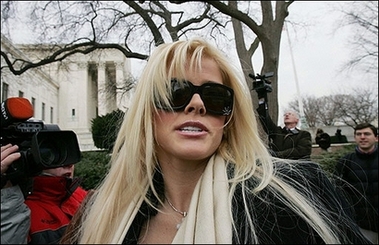 Another mysterious death leaving a slew of unanswered questions and speculations that will likely go on forever. She will be compared to Marilyn Monroe for good or ill. I for one, was never a fan of the tabloid queen, but the whole story with her son’s death and now her own, is sad and tragic. I feel sorry for her and my heart goes out to her family.

Anna Nicole Smith, the curvaceous blonde whose life played out as an extraordinary tabloid tale — Playboy centerfold, jeans model, bride of an octogenarian oil tycoon, reality-show subject, tragic mother — died Thursday after collapsing at a hotel. She was 39.

She was stricken while staying at the Seminole Hard Rock Hotel and Casino and was rushed to a hospital. Edwina Johnson, chief investigator for the Broward County Medical Examiner’s Office, said the cause of death was under investigation and an autopsy would be done on Friday.

Just five months ago, Smith’s 20-year-old son, Daniel, died suddenly in the Bahamas in what was believed to be a drug-related death.

Seminole Police Chief Charlie Tiger said a private nurse called 911 after finding Smith unresponsive in her sixth-floor room at the hotel, which is on an Indian reservation. He said Smith’s bodyguard administered CPR, but she was declared dead at a hospital. Later Thursday, two sheriff’s deputies carried out at least eight brown paper bags sealed with red evidence tape from Smith’s hotel room.

$100 fines for walking and gaming

Next it will be chewing gum, picking your nose, scratching your bum or twirling your hair. That is what neo-feudalism is all about; making every tiny little action potentially illegal so that you have to constantly watch what you are doing and keep looking over your shoulder lest the King’s men come to take you away. Thus the paranoia and captivity are complete in the New World Order system.

The point is, it is not about your safety, but about totalitarian control. If you don’t believe it, watch the Discovery Channel’s big hit “2057” where they tell you that in the future, you will not have any privacy whatsoever, your home will spy on you and even your urine will be monitored 24 hours a day. Do you think they are joking? No. The neo-feudal elites want to control every single activity of yours, including your bowel movements apparently, and I don’t care if you don’t believe me; go and research it for yourself. This is what is being done with cattle and sheep and believe me, we are fast on our way to becoming just that.

Don’t play around with Left and Right, Democrat or Republican. The real enemies of humanity are the elite ultra-rich banking and royal families who comprise neo-feudalism. In America, it is without a doubt, the Rockefeller family which is at the top of the stinking pile. In Britain, the Windsors and Rothschilds. In Europe, the House of Orange, King Juan Carlos and others. All of them are Bilderberg members. Get it straight as to who is ultimately behind the terror, who wants endless war, who wants a global government police-state dictatorship and who is seeking to make you into total slaves.

New Yorkers face ban on playing on handhelds, listening to iPods, and other distractions while crossing streets.

Many PlayStation Portable and Nintendo DS owners who use their handhelds on their daily commutes may be familiar with the sinking sensation of realising they’ve missed their stop after getting too involved in a game. However, most pedestrians seem to manage to put down their handheld long enough to check that they’re not stepping into oncoming traffic.

It would seem, though, that some people just can’t tear themselves away. New York State Senator Carl Kruger told Reuters that three pedestrians in the Brooklyn district have been killed since September by traffic after stepping into a road while using an electronic device that distracted them from looking where they were going. In one case, a device prevented someone from hearing warnings from other pedestrians to “watch out!”

Kruger commented, “What’s happening is when they’re tuning into their iPod or BlackBerry or cell phone or video game, they’re walking into speeding buses and moving automobiles. It’s becoming a nationwide problem.”

The legislation will be introduced today to ban the use of electronic gadgets, including portable game machines, BlackBerrys, mobile phones, and iPods, while crossing the road. Those who ignore the ban could face a fine of $100.

The British government on Thursday rejected the charges of a “police state,” put down by a man who was released without charge after anti-terror raids last week. Abu Bakr, one of nine men arrested last Wednesday during a major anti-terrorism raid in Birmingham, central England made the remarks on BBC television.

Bakr had been detained with eight other men over an alleged plot of “Iraq-style” execution of a British Muslim soldier.

In an interview with GMTV, Bakr called it government strategy to divert public attention from a “cash-for-honors” probe that has dappled Prime Minister Tony Blair’s final months in office.

One out of every 150 American eight-year-olds has some form of autism, meaning that 560,000 children in the country have the disorder, the U.S. Centers for Disease Control and Prevention (CDC) said Thursday.

That’s a higher prevalence than prior estimates, drawn from a number of countries, that had pegged rates at between 1 in 500 and 1 in 166 children, according to the CDC.

The full report is published in the Feb. 9 issue of the agency’s journal Morbidity and Mortality Weekly Report.

Autism, hyperactivity and Tourette’s syndrome on the increase in children

A comprehensive Danish study has found that over a 10-year period there has been in Denmark a substantial rise in cases in children of autism, hyperactivity and Tourette’s syndrome.

The study carried out by researchers at Denmark’s University of Aarhus did not examine the possible causes of the increased numbers.

Apparently a number of earlier studies had also reported notable increases in recent years in the number of children being treated for autism, which could say experts in some respects be due to better scrutiny, improved diagnostic techniques and a broader definition of the disorder, or possibly due to environmental factors.

Autism is characterised by social isolation, language abnormalities and repetitive and compulsive patterns of behaviour. Tourette’s syndrome is characterized by uncontrollable vocal or motor behaviours.

But the Danish study says the upward trends in reported autism diagnoses may be part of a broader pattern in childhood neuro-psychiatric illness.

The number of ADHD cases tripled, while the number of Tourette Syndrome cases more than doubled.

MARK COLVIN: A new psychological study of modern children has found an alarming increase in the incidence of a number of mental illnesses.

The Danish study of 700,000 children born in the 1990s found, for instance, that the number of Tourette Syndrome cases had doubled, and there were three times as many kids diagnosed with Attention Deficit Disorder.

The researchers say it’s not clear whether the rise is “real and caused by environmental factors”, or whether it can be put down to increased awareness and better diagnosis by doctors.

EMILY BOURKE: The Danish study collected information on 700,000 children born during the 1990s.

By the year 2004, almost 4,500 children were diagnosed with either Tourette Syndrome, Autism, Attention Deficit Hyperactivity or Obsessive Compulsive Disorder.