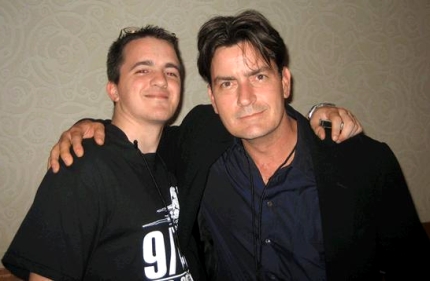 The New York Post and others have undertaken a concerted attack on 9/11 truth, erecting a wall of unified lies and spin in an attempt to make it appear as if Charlie Sheen and Rosie O’Donnell are backing away from the movement.

SUPPORT for the loopy 9/11 documentary “Loose Change” – which argues that the World Trade Center terror attack was part of a secret U.S. government conspiracy – is quickly losing steam.

A source tells us Charlie Sheen “is having second thoughts” about being involved in an updated version of the flick, which has a huge following on YouTube. As Page Six reported in March, Sheen had agreed to narrate the ridiculous flick, presumably to give it some needed Hollywood sizzle.

As we have come to expect from Johnson, his hit piece is factually bankrupt – Charlie Sheen never agreed to narrate the movie – he has been in talks to explore this possibility but will not come to a final decision until after the film is completed. Johnson and the New York Post got it flat wrong when they reported back in March that Sheen had “agreed to narrate a new version of the loopy YouTube documentary “Loose Change” and have now resorted to stacking lie upon lie to cover their initial screw up.

No such agreement had taken place, so the notion that Sheen is now having “second thoughts” about the project is nothing more that total spin to cover the fact that the New York Post initially lied in claiming the deal had been struck, when no contract had been signed.

It also represents a callous attempt to derail the entire project by sowing seeds of doubt that aren’t even there and attack the 9/11 truth movement by falsely claiming one of its most prominent advocates is deserting the cause. A similar tactic was employed when Bill O’Reilly threatened Dallas Maverick’s owner Mark Cuban with consequences if he bankrolled Loose Change.

Alex Jones was invited to act as a consultant on Loose Change: Final Cut at the very start of the project and has since taken a role as executive producer. In contributing to this article, Alex made it clear that Loose Change is still a work in progress and is being carefully edited, vetted and fact checked, with new interviews and information being added all the time. The film is by no means complete and the understanding all along was that Sheen would only make a decision on whether to narrate the documentary after he had had a chance to watch the final version.

In addition, an article entitled Rosie O’Donnell & Charlie Sheen Bail: Big Hit for Conspiracy Theories, claims that Rosie O’Donnell quit The View because of her on-air fight with Neo-Con Stepford Wife Elizabeth Hasselbeck. In reality, as we reported before it was announced she had quit, Rosie had been thinking of leaving early the week before, due to what she saw as an effort to tar her reputation before she exited and prevent her from getting her own show.

The article also claims that ABC cancelled the guest appearances of William Rodruigez and the Loose Change crew, when in fact is was Rodriguez himself who cancelled the slot.

Since the documentary hasn’t been released yet that would seem like a hard task and in addition, Popular Mechanics’ 9/11 hit piece along with their book on the subject have been widely re-debunked as error-strewn smear jobs driven by partisanship and cronyism by 9/11 researchers, ourselves, as well as in a new book by Professor David Ray Griffin devoted solely to the subject.

Just as in the Spanish Inquisition, where torturers would claim dissidents had recanted and use it as a propaganda boon, this whole move is a coordinated campaign to undermine the Loose Change project and try and topple Sheen and O’Donnell from their bold public platforms by lying in asserting they are now backing down.

It’s not going to work.

Loose Change: Final Cut will forge ahead and it will be a massive success. The corporate media will not re-write history and erase the fact that Sheen and O’Donnell courageously used their prominent public soapboxes, risking their very careers, to educate the public about 9/11 truth, along with the countless other professors, scientists and government whistleblowers who have gone public, and no amount of bullying, smear, spin and deception on behalf tabloid hacks, government operatives and naysayers is going to prevent the 9/11 truth movement going from strength to strength.

This entry was posted in Operation 9/11, Resistance. Bookmark the permalink.

One response to “The Truth About Charlie Sheen & Loose Change”