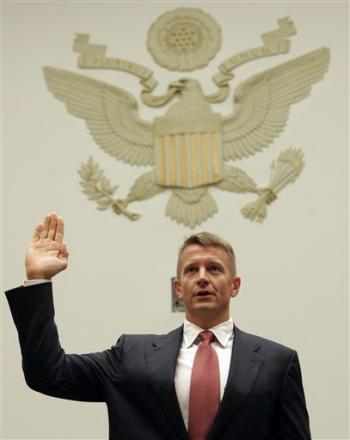 Blackwater USA founder Erik Prince is sworn in on Capitol Hill in Washington, Tuesday, Oct. 2, 2007, prior to testifying before the House Oversight Committee hearing examining the mission and performance of the private

WASHINGTON (AP) — Public relations giant Burson-Marsteller has vast experience steering companies through tough times. But there’s a limit to how much it can help Blackwater USA, a new client that’s been battered by negative publicity.

The State Department, which pays Blackwater hundreds of millions of dollars to protect U.S. diplomats in Iraq, has stringent rules barring the private security contractor from discussing with the media the details of its work, according to those familiar with the arrangement.

Under those limitations, it’s difficult to repair a corporate image, said one official close to Blackwater.

The department allows little room for error. On Sept. 16, Blackwater guards were involved in a shooting in Baghdad that left 13 Iraqis dead. Blackwater issued a statement to reporters saying its personnel acted lawfully and appropriately to a “hostile attack” from “armed enemies.”

That statement was not cleared first with State officials, a move that prompted complaints from the department because the statement pre-empted official inquiries into the incident. The Iraqis have maintained the Blackwater guards opened fire without provocation.

More recently, Erik Prince, Blackwater’s top executive, appeared with department approval before a congressional committee investigating the company. Although Democrats on the committee were sharply critical of Prince, Blackwater representatives viewed his appearance as a rare and welcome opportunity to respond to their critics.

Even in a hostile hearing room, Prince could at least respond, said the official, who spoke on condition of anonymity because he wasn’t authorized to speak to reporters.

Burson-Marsteller was brought aboard by the Washington law firms representing Blackwater — McDermott Will & Emery and Crowell & Moring.

One of the executives on the Blackwater account is Robert Tappan, a former State Department official. Tappan is a managing director of BKSH & Associates Worldwide, a Burson-Marsteller subsidiary.

At State, Tappan was deputy assistant secretary for public affairs. While at State, he spent six months in Baghdad as director of strategic communications for the Coalition Provisional Authority, the temporary governing body that disbanded in June 2004.

On Thursday, Paul Cordasco, a spokesman for Burson-Marsteller, said the company does not discuss its clients. In a statement sent by e-mail Friday, Cordasco said BKSH helped Prince prepare for the congressional hearing.

“With the hearing over, BKSH’s temporary engagement has ended,” Cordasco said.

According to the Center for Media and Democracy, Burson-Marsteller clients have included cigarette maker Philip Morris, nuclear power plant owner Entergy and Allergan, the pharmaceutical company that makes Botox.

Blackwater did not return a telephone call and an e-mail seeking comment.

The State Department is one of Blackwater’s largest federal customers. Blackwater and two other private security companies protect U.S. diplomats and facilities in Iraq.

Richard Griffin, head of the State Department’s Bureau of Diplomatic Security, said Tuesday that Blackwater earns about $473 million annually through the umbrella contract.

Formed in 1997 by Prince, a former Navy SEAL, Blackwater’s business has grown since 2001 as the government’s demand for its security services has increased.

According to the House Oversight and Government Reform Committee, Blackwater has received federal contracts worth more than a $1 billion, with the bulk of its earnings coming from the State Department.

On Tuesday, Prince, 38, spent several hours at the witness table as Democrats on the oversight committee accused his company of being above the law and his guards of being indifferent to Iraqi casualties.

The fees Blackwater charges are excessive, they said, and Prince and his associates have become wealthy because of the war.

Prince, younger than most members of the committee, calmly fielded the committee’s questions, saying Blackwater personnel have acted appropriately in a chaotic environment. He received strong support from several Republicans, who said the criticism is motivated mainly by Prince’s connections to Republican causes.

Len Biegel, a crisis management consultant who advised Johnson & Johnson 25 years ago during the Tylenol product-tampering case, said the Blackwater situation has escalated beyond a public relations emergency.

“It’s really threatening the reputation of the company,” Biegel said. “That puts it into the crisis category.”

If Blackwater is to survive the crisis, Biegel said, it needs to show that it’s making the changes necessary to prevent a repeat of situations that have cast it in such a negative light.

“It’s not simply what is said by Blackwater, but what actions beyond the initial steps are they taking,” Biegel said.

At the hearing, Prince said he supported legislation authored by Rep. David Price, D-N.C., that would ensure the U.S. government has the legal authority to prosecute crimes committed by contractors working in war zones.

Beau Phillips, a partner with the public relations firm Chlopak, Leonard, Schechter and Associates, said Blackwater needs to continue stressing that most of its employees are former military personnel.

“They need to help people understand that as you attack Blackwater, you’re really attacking soldiers in a sense,” Phillips said. “I think that’s a message that would be helpful.”

That may be a hard sell, however, given the unpopularity of the war in Iraq.

“Figuratively wrapping your company in the American flag works when the war is supported by the majority,” Levick wrote in a blog posted last month on his company’s Web site. “But when the tide turns, old messages no longer have the same effect.” 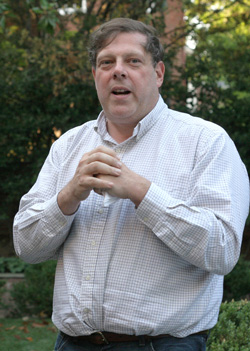 Mark Penn is the chief strategist for Hillary Rodham Clinton’s presidential campaign, working 24/7 on her behalf (indeed, he is known to send email at 2 a.m.) and earning tens of thousands of dollars in fees.

With that sort of day-and-night job, you would think Mr. Penn would have time for little else. Indeed, other Clinton senior advisers took leaves of absences or turned down clients in order to work for the campaign.

But he somehow manages to remain president of Burson-Marsteller, a publicly traded global public affairs firm. And as such, he is inevitably linked to Burson’s clients — not all of whom are, shall we say, on Mrs. Clinton’s Christmas card list.

Today we learned that recently one of those clients was Blackwater — the American contractor that provides security to some top American officials in Iraq, and which is under investigation for allegedly aggressive tactics and the role of its guards in the shooting at a Baghdad city square where 17 Iraqis were killed.

Mr. Penn was on a plane this afternoon and could not be reached for him; a phone message has been left for a Burson spokesman as well. But Mr. Penn and the spokesman told other news outlets today that Blackwater was only briefly a client in a temporary assignment for a Burson subsidiary, BKSH. That assignment involved preparing Blackwater for a recent hearing before Congress. Blackwater is no longer a client, said Mr. Penn, who added that he never worked on the piece of business himself.

“Through a personal relationship, BKSH, a subsidiary of Burson-Marsteller, helped Blackwater prepare for their recent hearing before Congress. With the hearing over, BKSH’s temporary engagement has ended,” said the Burson spokesman, Paul Cordasco.

A blog for the Nation and the Associated Press carried stories on the Burson-Blackwater connection first.

Howard Wolfson, a spokesman for the Clinton campaign, said that Mrs. Clinton had not asked Mr. Penn for an explanation about Blackwater — about which she has expressed concerns on the campaign trail — nor asked him to take a leave from Burson.

“Mark is an extremely valuable member of this team,” Mr. Wolfson said. “He is our senior strategist. Senator Clinton clearly believes Blackwater must be held accountable for its actions.”

About Mr. Penn’s ongoing ties to Burson, Mr. Wolfson said. “His situation is very typical for presidential campaigns. There is nothing unusual about a consultant maintaining outside affiliations. Hillary has trust in Mark.”

Other Democratic and Republican candidates do have consultants whose firms have a bevy of clients as well; Harrison Hickman, the pollster for former Senator John Edwards, one of Mrs. Clinton’s rivals, continues to be a member of Global Strategy Group, which represents insurance and drug companies, for instance.

But Mr. Penn’s firm has netted the sort of bad headlines that Mrs. Clinton would not seek: Other than Blackwater, clients have included Countrywide Financial, which has been tainted by the subprime mortgage scandal, and Cintas Corp., which has fought the unionization of its workforce.

One of Mrs. Clinton’s rivals, former Senator John Edwards, went on the attack this afternoon, meanwhile. His campaign e-mailed a statement from Mr. Edwards:

“Bush has been a perfect example of cronyism because Blackwater has given hundreds of thousands of dollars to republicans and to President Bush. I also saw this morning that Senator Clinton’s primary adviser, Mark Penn who is like her Karl Rove — his firm is representing Blackwater. I think it is important for Iowa caucus goers to understand the choices they have in this election. And it is the reason I continue to say we dont want to replace a group of corporate Republicans with a group of corporate Democrats. I think it is important for caucus goers to see this choice.”

Asked to comment on Mr. Edwards’ shot, Mr. Wolfson repeated that Mr. Penn was a valuable and trusted member of the Clinton campaign.

Mr. Edwards himself was a consultant in 2005 and 2006 with a hedge fund, the Fortress Investment Group, which has had investments in subprime mortgage companies that have foreclosed on victims of Hurricane Katrina. Mr. Edwards has also had a portfolio with Fortress, but has divested holdings that related to the mortgage companies.