Ex-Wife Takes on Chavez over totalitarianism 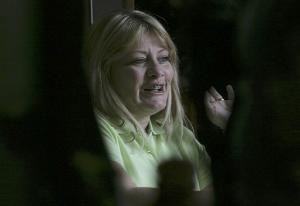 Marisabel Rodriguez, ex-wife of Venezuela’s President Hugo Chavez, speaks during an interview with the Associated Press in Barquisimeto, Venezuela, Thursday, Dec. 6, 2007. A new voice has emerged to challenge Hugo Chavez’s push to turn Venezuela into a socialist society, someone with rare insight into the president’s passions and vulnerabilities.

BARQUISIMETO, Venezuela – A new voice has emerged to challenge Hugo Chavez’s push to turn Venezuela into a socialist society, someone with rare insight into the president’s passions and vulnerabilities: his ex-wife.

Marisabel Rodriguez says her return to the public spotlight is not a personal vendetta.

“This fight is not against a single person,” she said in an interview at her home with The Associated Press. “This struggle is against the danger posed by leaving a person in power for a long time.”

Rodriguez had largely kept out of the public spotlight since she and Chavez divorced in 2004. But the former first lady resurfaced with a series of appearances urging voters to vote “no” in last Sunday’s referendum on constitutional changes that would have let Chavez run for re-election indefinitely.

Chavez narrowly lost the referendum, his first defeat at the ballot box in nearly nine years in office.

“We were on the verge of handing over the country to the president like a blank check,” she said, calling it a “road straight to totalitarianism.”

Rodriguez denies any interest in running for office herself, but already her outspoken resistance has become a public relations thorn in Chavez’s side.

As first lady, she was part of the assembly that drafted the current 1999 constitution.

Now she is proposing an amendment to shorten presidential terms from six to four years, saying Chavez has been in office long enough. She also has spoken in favor of dissident politicians and student protesters.

And on Sunday, she went to the polls with Rosines, the 10-year-old daughter she had with Chavez, while the president’s supporters chanted: “Get out of here!”

Chavez has not responded directly to her, though in a speech Wednesday he suggested his daughter was being kept away from him.

“Now they are putting my little girl in the eye of a hurricane, and that hurts me. Rosines, God bless her. I hope I can see her. They practically don’t let me see her. I’m going to have to turn to the law. She has a father,” he said.

Rodriguez, 43, said she has never denied Chavez the right to visit his daughter: “The doors of this house will always be open.”

She said she supposes Chavez brought up their daughter “to scare me.”

“It’s a way of telling me to shut up,” she said, adding: “He doesn’t dare tell me because I won’t shut up.”

Their marriage in 1997, a year before Chavez was elected president, was the second for Chavez, who had three children with his first wife.

The president remains single, while Rodriguez remarried in May to Felix Lisandro Garcia, a 39-year-old hotel tennis instructor.

She said she has no plans to leave Venezuela.

“If I have to fight for my country, I want to do it from here,” she said.

Earlier, Chavez could be heard on the television in her dining room scolding some of his supporters for abstaining from the vote, calling them “cowards” and “lazy people.”

“Now he says those who voted ‘no’ voted for (President) Bush,” Rodriguez jeered. “He’s nursing his wounds. … Sometimes when a person is so sad, the sadness can’t be hidden.”

She takes a critical view on almost every Chavez policy. She says Venezuela is wrongly interfering in nations like Bolivia and Ecuador and is spending too much on the military. Shortages of basic goods like milk, she says, show the government’s failures.

Her advice to the opposition? Be alert, she said, because “he’s going to keep trying to cheat us” by attempting to push through radical reforms by other methods.

Asked if she has some good memories of Chavez, she paused for a few seconds and said: “No one is so bad to not have a good side.”

Then, speaking more broadly, she added: “But I have to admit he had an extraordinary ability to fool us.”