Gore criticised for lining his pockets with $6,600-per-minute green speech 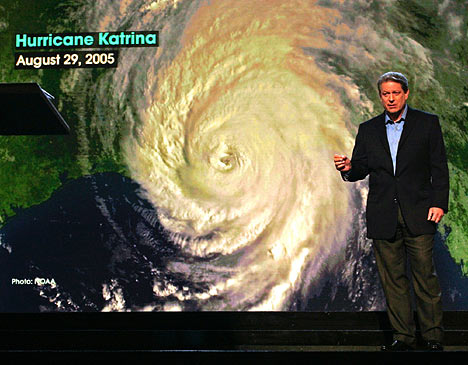 Bore: Gore picked up $200,000 for delivering a speech ‘similar’ to all the others and had heads ‘twitching with tiredness’

Al Gore has come under fire for making personal gain from his mission to save the planet – after charging £3,300 a minute to deliver a poorly received speech.

The former American Vice-President was also accused of being “precious” at the London event, demanding his own VIP room and ejecting journalists, despite hopes the star-studded gathering would generate publicity for the fight against global warming.

Many of the audience at last month’s Fortune Forum summit were restless as Mr Gore, who has won both a Nobel Peace Prize and an Oscar for his campaigning work this year, delivered the half-hour speech that netted him £100,000.

The glittering fundraiser was held in The Royal Courts of Justice and attracted world leaders, entrepreneurs and celebrity activists including Bob Geldof, Darryl Hannah and Jerry Hall, who was there as “a Special Ambassador of The Alliance for a New Humanity”. Guests had paid between £1,000 and £50,000 to attend.

But a source told The Mail on Sunday: “Many guests looked tired and began to talk among themselves during his speech. Heads began to twitch with tiredness.

“Al uses his position for great personal gain. He goes from event to event delivering a similar speech, earning a large fee, and a lot of the time he doesn’t actually inform the audience.

“He refused to speak to journalists and security would usher away VIP guests and the Press.

“He was being very precious and demanded his own VIP room before the event, where he held his own exclusive reception.

“The other guests were cut off. It was very clear that many guests were disappointed by this.”

Even some of the charities benefitting from the event were unhappy with the actions of 59-year-old Mr Gore and his entourage, especially the way they treated invited guests.

Paul Hetherington, media relations manager for WaterAid, said: “Pictures couldn’t be taken and people were being moved out of the main hall so they couldn’t experience the event. It was very disruptive.

“We had to apologise to people who were invited. We wanted to say thank you for all the support that many people had given us, but some of them were asked to leave.

“Many guests were invited by the hosts, so why should the speaker have any control over these guests and removing the media? It defeated the object of trying to raise awareness of the cause.”

A source added: “Al had two people working for him: a woman who was his assistant and a male security officer who enrolled the help of security guards at The Royal Courts of Justice in a military-style operation to guard Al Gore. They took over the show.”

However, a spokesman for Mr Gore, who won his Oscar for the polemic documentary An Inconvenient Truth, told The Mail on Sunday: “Mr Gore donates a percentage of all of his speaking fees to the Alliance for Climate Protection.

“With regards to the media arrangements, some of Mr Gore’s events are open to the media, some of them are not. As you know, he has many open events coming up, including the Nobel Peace Prize.

“Unfortunately, this event had more limited availability. I do apologise for that. He does do his best to speak to reporters as often as possible.”

Fortune Forum, which was founded by socialite ex-model Renu Mehta last year with the aim of attracting wealthy philanthropists to large-scale social and environmental projects, declined to comment.

A convenient $100 million for green Gore
WHO would have thought that saving the planet could be such a lucrative business? Al Gore, the former US vice-president turned environmental campaigner, has made more than £50m in just seven years from his books, speeches and shrewd investments in technology and green ventures.

A Convenient Untruth About Climate Changes