Hear Voices? It May Be an Ad 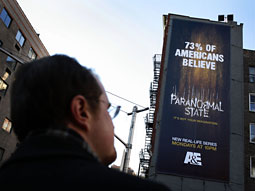 No, he’s not crazy: Our intrepid reporter Andrew Hampp ventures to SoHo to hear for himself the technology that has New Yorkers ‘freaked out’ and A&E buzzing. Photo Credit: Yoray Liberman

NEW YORK (AdAge.com) — New Yorker Alison Wilson was walking down Prince Street in SoHo last week when she heard a woman’s voice right in her ear asking, “Who’s there? Who’s there?” She looked around to find no one in her immediate surroundings. Then the voice said, “It’s not your imagination.”

Indeed it isn’t. It’s an ad for “Paranormal State,” a ghost-themed series premiering on A&E this week. The billboard uses technology manufactured by Holosonic that transmits an “audio spotlight” from a rooftop speaker so that the sound is contained within your cranium. The technology, ideal for museums and libraries or environments that require a quiet atmosphere for isolated audio slideshows, has rarely been used on such a scale before. For random passersby and residents who have to walk unwittingly through the area where the voice will penetrate their inner peace, it’s another story.

Ms. Wilson, a New York-based stylist, said she expected the voice inside her head to be some type of creative project but could see how others might perceive it differently, particularly on a late-night stroll home. “I might be a little freaked out, and I wouldn’t necessarily think it’s coming from that billboard,” she said.

Joe Pompei, president and founder of Holosonics, said the creepy approach is key to drawing attention to A&E’s show. But, he noted, the technology was designed to avoid adding to noise pollution. “If you really want to annoy a lot of people, a loudspeaker is the best way to do it,” he said. “If you set up a loudspeaker on the top of a building, everybody’s going to hear that noise. But if you’re only directing that sound to a specific viewer, you’re never going to hear a neighbor complaint from street vendors or pedestrians. The whole idea is to spare other people.”

Holosonics has partnered with a cable network once before, when Court TV implemented the technology to promote its “Mystery Whisperer” in the mystery sections of select bookstores. Mr. Pompei said the company also has tested retail deployments in grocery stores with Procter & Gamble and Kraft for customized audio messaging. So a customer, for example, looking to buy laundry detergent could suddenly hear the sound of gurgling water and thus feel compelled to buy Tide as a result of the sonic experience.

Mr. Pompei contends that the technology will take time for consumers to get used to, much like the lights on digital signage and illuminated billboards did when they were first used. The website Gawker posted an item about the billboard last week with the headline “Schizophrenia is the new ad gimmick,” and asked “How soon will it be until in addition to the do-not-call list, we’ll have a ‘do not beam commercial messages into my head’ list?”

“There’s going to be a certain population sensitive to it. But once people see what it does and hear for themselves, they’ll see it’s effective for getting attention,” Mr. Pompei said.

A&E’s $3 million to $5 million campaign for “Paranormal” includes other more disruptive elements than just the one audio ad in New York. In Los Angeles, a mechanical face creeps out of a billboard as if it’s coming toward the viewer, and then recedes. In print, the marketing team persuaded two print players to surrender a full editorial page to their ads, flipping the gossip section in AM New York upside down and turning a page in this week’s Parade into a checkerboard of ads for “Paranormal.”

It’s not the network’s first foray into supernatural marketing, having launched a successful viral campaign for “Mind Freak” star Criss Angel earlier this year that allowed users to trick their friends into thinking Mr. Angel was reading their mind via YouTube.

“We all know what you need to do for one of these shows is get people talking about them,” said Guy Slattery, A&E’s exec VP-marketing. “It shouldn’t be pure informational advertising. When we were talking about marketing the show, nearly everyone had a connection with a paranormal experience, and that was a surprise to us. So we really tried to base the whole campaign on people’s paranormal experiences.”

So was it a ghost or just an annoyed resident who stole the speaker from the SoHo billboard twice in one day last week? Horizon Media, which helped place the billboard, had to find a new device that would prevent theft from its rooftop location. Mr. Pompei only takes it as a compliment that someone would go to the trouble of stealing his technology, but hopes consumer acceptance comes with time. “The sound isn’t rattling your skull, it’s not penetrating you, it’s not doing anything nefarious at all. It’s just like having a flashlight vs. a light bulb,” he said.

This entry was posted in Mind Control, Social Engineering. Bookmark the permalink.

7 responses to “Hear Voices? It May Be an Ad”