Death Ray Replaced By The Voice of God 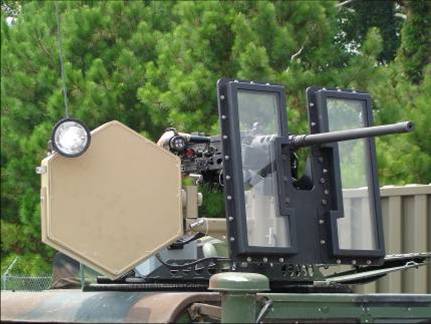 There are now rumors in Iraq of a devilish American weapon that makes people believe they are hearing voices in their heads. It appears that some of the troops in Iraq are using “spoken” (as opposed to “screeching”) LRAD to mess with enemy fighters. LRAD can put the “word of God” into their heads. If God, in the form of a voice that only you can hear, tells you to surrender, or run away, what are you gonna do?

While U.S. efforts to deploy it’s microwave Active Denial System (which transmits a searchlight sized beam of energy which makes people downrange feel like their skin is on fire) continue to be delayed, another non-lethal system, LRAD (Long Range Acoustic Device) has been quietly deployed to Iraq. And there the story gets a little strange.

LRAD is basically a focused beam of sound. Originally, it was designed to emit a very loud sound. Anyone whose head was touched by this beam, heard a painfully loud sound. Anyone standing next to them heard nothing. But those hit by the beam promptly fled, or fell to the ground in pain. Permanent hearing loss is possible if the beam is kept on a person for several seconds, but given the effect the sound usually has on people (they move, quickly), it is unlikely to happen. LRAD works. It was recently used off Somalia, by a cruise ship, to repel pirates. Some U.S. Navy ships also carry it, but not just to repel attacking suicide bombers, or whatever. No, the system was sold to the navy for a much gentler application. LRAD can also broadcast speech for up to 300 meters.

The navy planned to use LRAD to warn ships to get out of the way. This was needed in places like the crowded coastal waters of the northern Persian Gulf, where the navy patrols. Many small fishing and cargo boats ply these waters, and it’s often hard to get the attention of the crews. With LRAD, you just aim it at a member of the crew, and have an interpreter “speak” to the sailor. It was noted that the guy on the receiving end was sometimes terrified, even after he realized it was that large American destroyer that was talking to him. This apparently gave the army guys some ideas, for there are now rumors in Iraq of a devilish American weapon that makes people believe they are hearing voices in their heads. 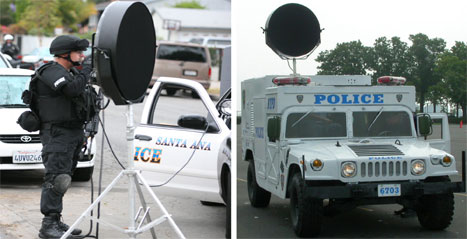 This made more sense when an American advertising firm recently used an LRAD unit to support a media campaign for a new TV show. LRAD was pointed at a sidewalk in Manhattan, below the billboard featuring the new show. LRAD broadcast a female voice providing teaser lines from the show. The effect was startling, and a bit scary for many who passed through the LRAD beam. It appears that some of the troops in Iraq are using “spoken” (as opposed to “screeching”) LRAD to mess with enemy fighters. Islamic terrorists tend to be superstitious and, of course, very religious. LRAD can put the “word of God” into their heads. If God, in the form of a voice that only you can hear, tells you to surrender, or run away, what are you gonna do?

Meanwhile, the microwave powered ADS, a non-lethal weapon that looks like a radar dish, languishes in politically correct limbo. The ADS “radar dish” projects a “burn ray” that is about four feet in diameter. It is effective in fog, smoke and rain. When pointed at people and turned on, it creates a burning sensation on the skin of its victims, causing them to want to leave the area, or at least greatly distracts them. The microwave weapon has a range of about 500 meters. ADS is carried on a hummer or Stryker, along with a machine-gun and other non-lethal weapons (like LRAD). The proposed ROE (Rules of Engagement) for ADS were that anyone who kept coming after getting hit with microwave was assumed to have evil intent, and could be killed. The microwave is believed to be particularly useful for terrorists who hide in crowds of women and children, using the human shields to get close enough to make an attack. This has been encountered in Somalia and Iraq.

Deployment of ADS has been delayed for years because of concerns about how non-lethal it really is. ADS has been fired, in tests, over 2,500 times. Many of these firings were against human volunteers, and the device performed as predicted, without any permanent damage. But generations of exposure to lurid science fiction descriptions of “death rays” has made the defense bureaucrats anxious over the negative public relations potential if something like ADS was actually used. From a publicity perspective, using more lethal “non-lethal-weapons” is preferable to deploying something safer, but that could be described, however incorrectly, as a “death ray.” In any event, it appears that the cheaper, smaller (about 45 pounds), gentler and more flexible LRAD has taken ADS’s place in the American arsenal. At least for now.

6 responses to “Death Ray Replaced By The Voice of God”