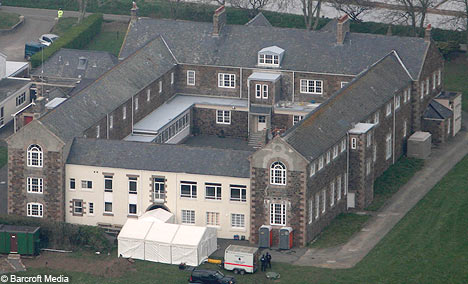 Two more torture chambers have been discovered at the Jersey care home where human remains were found last month.

It brings the number of dungeons discovered beneath the former care home to four.

Search teams have already excavated two chambers at Haut de la Garenne where shackles and a blood-spattered concrete bath were found beside a wooden beam bearing the haunting message, “I’ve been bad 4 years and years”.

Officers yesterday identified another two rooms with a similar layout hidden under the Victorian building.

Victims have described the cellars as “punishment rooms” where children were kept in solitary confinement, drugged, raped and flogged.

Senior investigating officer Lenny Harper said: “We have now established there are a further two rooms and we have received evidence from another victim over the last few days which tells of abuse in one of these.”

He said items been recovered from the first two rooms tended to corroborate victims’ claims of abuse.

The home was dubbed the House of Horrors after the remains of a child were found in a stairwell on February 23.

Forensic experts had already examined two other cellars where they found shackles and a cement bath with spots of blood on it.

There was also a haunting graffiti message: “I’ve been bad 4 years and years.”

Deputy police chief Lenny Harper said yesterday: “We have now established that there are a further two rooms, and we have received evidence from another victim over the last few days which tells of abuse in one of these two new rooms.

“A number of items have been recovered which tend to corroborate the statements of victims.”

More than 100 former residents have claimed they were physically and sexually abused at the home over four decades dating back to the 1960s.

The bricked-up cellars do not appear on any plans of the home, known locally as Colditz.

Police have been sieving rubble from the first two chambers, no more than 7ft high, for more than a month.