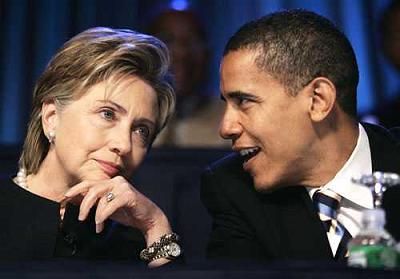 Campaign spokespeople refuse to disclose location of meeting, but reports admit Democratic candidates convened at “an event in Northern Virginia”

According to news reports, Barack Obama and Hillary Clinton went out of their way to hold their long-awaited private meeting in a very specific location – not at Hillary’s mansion in Washington – but in Northern Virginia, which also just happens to be the scene of the 2008 Bilderberg meeting.

Obama’s spokesman Robert Gibbs told the media that Obama and Clinton held a private meeting last night but he refused to disclose where it taken place, except that it was not at Clinton’s home in Washington, as had been widely reported. Hillary campaign managers also refused to disclose the location of the rendezvous.

“Reporters traveling with Obama sensed something might be happening between the pair when they arrived at Dulles International Airport after an event in Northern Virginia and Obama was not aboard the airplane,” reports the Associated Press.

Dulles just happens to be walking distance from the Westfields Marriott hotel in Chantilly where Henry Kissinger, David Rockefeller and the rest of the Bilderberg globalists are convening.

“Asked at the time about the Illinois senator’s whereabouts, Gibbs smiled and declined to comment,” the reports adds.

What is the only political “event” taking place in Northern Virginia at the moment? The Bilderberg Group meeting of course. Rather than taking the easier option of meeting at Clinton’s Washington mansion, Obama and Hillary went out of their way to grace the Bilderberg elitists with their presence.

The neo-liberal website Wonkette, which had previously ridiculed “conspiracy theorists” for ascribing power to Bilderberg, seemed to take a somewhat different tone when it made the connection between Obama and Hillary’s meeting and the Bilderberg Group.

“Guess who had a very private talky-talk in (maybe) romantic Northern Virginia tonight, probably at the Bilderberg Group meeting in Chantilly? Your Barack Obama and Hillary Clinton!,” states the blog. “They really met and talked, in private, Thursday night. And really, it sounds like they did this at that creepy Bilderberg Group meeting, which is happening now, and which is so secret that nobody will admit they’re going, even though everybody who is anybody goes to Bilderberg.”

To have the potential future President and Vice-President of America attend a conference that debunkers have dismissed as a mere talking shop for old white men once again underscores the real influence that Bilderberg enjoys.

Not one U.S. corporate media outlet has made the connection between the location of the Bilderberg Group conference this year and Obama and Hillary’s decision to venture out to Chantilly for their confidential “tet a tet”.

Not one U.S. corporate media outlet has yet uttered one word about 125 of the world’s most influential power brokers meeting behind closed doors to discuss the future of the planet on U.S. soil – while being met by the probable future President of the United States.

Both Hillary and Obama have deep rooted connections to the Bilderberg elitists.

Bill Clinton attended the 1991 meeting in Germany shortly before becoming President and he attended again in 1999 when the conference was held in Sintra, Portugal (despite Clinton’s lie that he had not attended in 15 years).

Hillary herself was rumored to have attended the 2006 meeting in Ottawa, Canada.

As we reported last month, Bilderberg luminary and top corporate elitist James A. Johnson will select Democratic candidate Barack Obama’s running mate for the 2008 election and in turn potentially act as kingmaker for America’s future President.

Johnson also selected John Kerry’s running mate John Edwards in 2004 after Edwards had impressed Bilderberg elitists Henry Kissinger and David Rockefeller with a speech he gave at the globalist confab in Italy that year.

Johnson, who attended last year’s Bilderberg meeting in Turkey, is a representative for Friends of Bilderberg, an offshoot group that organizes Bilderberg’s annual meeting.

Hillary and Obama’s attendance of the 2008 Bilderberg meeting, and the complete failure of the mainstream media to report on the fact, once again betrays the super-secretive nature and influential reputation that the 54-year-old organization still maintains.

This entry was posted in 2008 Election, Illuminati Elites, Secret Societies. Bookmark the permalink.