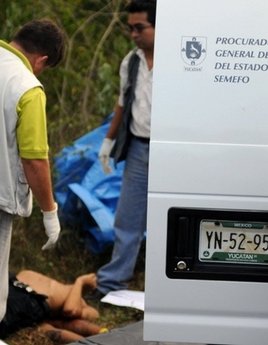 Forensic experts inspect some of the 12 decapitated bodies, bearing signs of torture, found in a suburb of Merida, capital of Yucatan state, eastern Mexico, on August 28  (AFP)

Eleven headless male bodies were found piled on top of each other and covered with blankets in a suburb of the city of Merida, the capital of Yucatan state.

Some of the cadavers also had their legs tied, an AFP photographer saw. One was completely naked, while others wore denim clothing. Some of the murdered men had tattooed arms.

A twelfth body was found in a town called Buctzotz, 70 kilometers (45 miles) northeast of Merida. Its head is also missing.

Jose Guzman, a Yucatan state prosecutor, said the bodies were found by townspeople but that the heads were still missing.

“We believe that the 12 executions were an isolated incident and not part of a strategy to destabilize the state,” Guzman told reporters.

A top Mexican public security official who visited Merida recently had noted that the city had remained largely untouched by the drug war that has left more than 2,600 dead in Mexico so far this year.

Just four drug-related murders had been reported in Yucatan state this year, according to El Universal newspaper.

Decapitated bodies have appeared in southern and northern Mexico, and authorities say they are revenge killings between rival drug cartels.

In recent years, drug trafficking gangs have resorted to decapitations and dismemberments against their foes in northern and southern Mexico. Hitmen often leave notes on the bodies indicating it was a drug-related assassination.

This entry was posted in Crime & Corruption, Drug Trafficking. Bookmark the permalink.