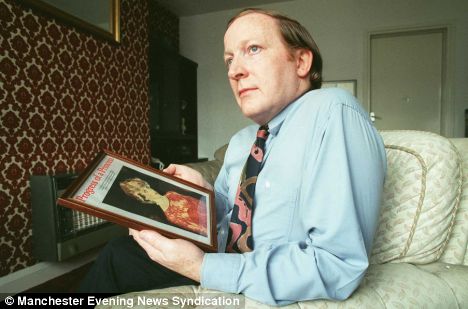 During his years in Royal service, he was said to have met and looked after three American Presidents including Jimmy Carter and Ronald Regan plus many other Heads of State from around the world.

A former Buckingham Palace butler has been unmasked as a sexual predator who ran a paedophile ring while serving the Royal Family.

Bachelor Paul Kidd, 55, groomed at least one of his teenage victims for sex by taking him for tea with the Queen Mother at Clarence House, it has emerged.

To the public, he had been the urbane gent who waited on the Royals for nine years – first the Queen at the Palace and then her mother.

He often publicly gushed about his blue blood employers talking of the Queen as ‘courteous and genuinely caring.’

But behind the facade, Kidd was leading a secret double life as a serial child abuser who molested a string of boys over a 30 year period.

He was finally exposed after one of his victims read a newspaper article in which he boasted about his links to the Royals and talked fondly of Princess Diana and her musical tastes.

Included in the haul were some nude pictures of a teenager who officers were able to trace and interview.

Some images were hidden in a safe while others were encrypted on his computer.

Kidd admitted 29 sex charges involving three boys namely indecent assault, sexual activity with a child and the possessing and making of indecent images of children between December 1974 and January 2008.

An accomplice David Hobday, 56, of St Johns Street, Dukinfield admitted seven charges involving one of the victims of sexual activity with a child and possessing indecent images. Both men face a maximum 14 years in jail.

A police source said: ‘Kidd was a very accomplished groomer of children.

‘Given that he has been behaving like this for 30 years the likelihood is there could be many other victims out there who have not yet come forward.

‘This man used his Royal connections to impress and seduce young boys. He even had autographed pictures of Manchester United players on his walls at home.

‘He was acting with at least one other man and it’s possible he could have been communicating with many other paedophiles over many years.

‘These offences are probably just the tip of the iceberg.’

Kidd had honed his skills as a silver service waiter when he joined the Royal Navy after leaving school – looking after the captain and officers.

During his naval service he visited 22 countries around the world. In 1976 he was appointed as butler to the Queen at Buckingham Palace and served there for six years until being transferred to Clarence House where he served the Queen Mother.

During his years in Royal service, he was said to have met and looked after three American Presidents including Jimmy Carter and Ronald Regan plus many other Heads of State from around the world.

He was also said to have worked closely with Princess Diana at Buckingham Palace in the six months prior to her wedding to Prince Charles.

In 1985 he gave up Royal Service due to a cancer scare but then started charging up to £4,000 a time as an after dinner speaker talking about his work with the Royal Family.

He ran a series of lectures including one he called: An uncomfortable experience for the Queens page boy.

Kidd also starred on numerous TV chat shows in the UK and USA including the Caroline Rhea show in New York.

He also appeared on stage with Hollywood actor Robin Williams at the Nemacolin Spa & Resort Centre in the USA.

In one interview Kidd said of the Queen: ‘She was always very courteous, but she only ever addressed me as ‘Kidd’ – never by my first name.

‘She deals with people in a genuinely caring manner. Her children are the future of the country, they cannot be brought up in a namby-pamby manner.

‘But in private, as a mother and grandmother, she dotes on the children.’

Police began investigating Kidd earlier this year after a victim, now 41 read a newspaper article about Kidd in which he talked about Princess Diana on the 10th anniversary of her death.

The victim was thought to be so disgusted by his bragging, he went to police and told officers how he was 14 when he was abused by Kidd after meeting him through a CB radio group.

Kidd introduced the lad to his Royal employers and took him for tea with the Queen Mother in the late 70s.

It is believed the victim even spoke to the Queen Mother – at a time when the late Royal had no idea he was being secretly abused by her servant.

It emerged he had met Kidd though a religious group when he was 14 and he was sexually accused and passed onto another paedophile.

A third victim later came forward to say he was abused in the 1980s when he was 15 after meeting him when Kidd was training to be a nurse.

At Minshull Street Crown Court, Manchester, Kidd and Hobday were told they would be sentenced on November 20 after probation officers complete a report assessing whether they are a risk to the public.

Various other charges will be allowed to lie on file.

Both were remanded in custody and Judge Mushtaq Khokhar told them: ‘You have both pleaded guilty to serious offences and you will be under no illusion that the likely sentence is going to be custody.’

Belgium defends king against ‘assault’
The Belgian Government has threatened legal action against one of France’s leading publishers for releasing a book linking King Albert II to a paedophilia scandal.

This entry was posted in Elite Pedophile Rings, Feudalism & Neofeudalism. Bookmark the permalink.