That Rothschild clan in full: eccentricity, money, influence and scandal 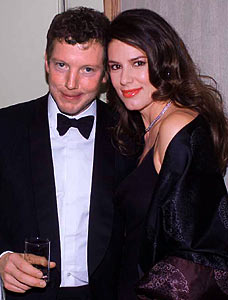 Party boy: Nat Rothschild has shed his wild side to earn a fortune. Photo: Daily Mail

Nat Rothschild’s career path – from playboy to plutocrat – has to be seen against the backdrop of his family history, studded as it is with eccentrics who were torn between loyalty to an immense and powerful name and the urge to break away from the clan.

His grandfather, Victor Rothschild, who died in 1990 at 79, set the pattern for much of the family in both business and lifestyle. While still at Cambridge University, he was a playboy who drove fast cars, water-skiied off Monte Carlo and played first-class cricket for Northamptonshire.

He also joined the Apostles, the university’s secret society that included the traitors Kim Philby, Guy Burgess and Anthony Blunt. It was Victor who lent Blunt – later surveyor of the Queen’s paintings – the money to buy his first Poussin. When Blunt’s treachery was eventually exposed, Rothschild denied that he was the “Fifth Man” in the spy ring, famously stating: “I am not and never have been a Soviet agent.” This was never seriously in doubt: his work for MI5 during the war had won him a George Medal.

Just 26 when he became the 3rd Baron Rothschild, he always sat on the Labour benches. Yet the Conservative prime minister Edward Heath put him in charge of his think tank, the Central Policy Review Staff, and Margaret Thatcher made him a security adviser.

As a scientist, Lord Rothschild chaired the Agricultural Research Council, then worked in Cambridge’s zoology department as well as holding a research job at Shell. He ultimately chaired the family’s UK bank, NM Rothschild & Sons, but did not involve himself in detail.

His sister Miriam, a distinguished entomologist, was nicknamed “Queen of the Fleas” after cataloguing their father’s insect collection. Their younger sister Kathleen, meanwhile, was known as an avid jazz fan: Thelonius Monk named a composition after her and Charlie “Bird” Parker died in her New York flat.

When Victor Rothschild retired in 1976, Sir Evelyn de Rothschild – then 45 –took over as bank chairman, even though he came from another branch of the family, the de Rothschilds.

Sir Evelyn, who had joined the bank in his mid-twenties, had developed a sound business sense that he also employed on the boards of the Express and Telegraph newspaper groups, as well as at The Economist, whose board he chaired until 1989. His third wife, the American lawyer Lynn Forester, was a supporter of Hillary Clinton’s presidential campaign but last month switched her allegiance to John McCain. She and Sir Evelyn live in Ascott House, one of the many Rothschild homes in Buckinghamshire. Katherine, the daughter of one of Sir Evelyn’s Rothschild cousins, is married to Marcus Agius, chairman of Barclays.

Victor’s eldest son, Jacob Rothschild, also worked at NM Rothschild – but he left the family bank in 1980 after a dispute with Sir Evelyn over strategy. Jacob, who had worked at Morgan Stanley in New York, wanted to merge with the rival SG Warburg bank; his conservative cousin did not.

As a leaving present, Jacob was given the Rothschild Investment Trust; he subsequently set up his own companies in the West End and built a new financial empire that was considered more aggressive than the traditional family bank.

Jacob, now 72, who inherited his father’s title in 1990, is as interested in the arts as he is in finance: he has chaired the National Gallery for many years and was chairman of the lottery’s heritage fund from 1994-8. In 2003, he became deputy chairman of BSkyB, the broadcaster in which News Corporation, the parent company of The Sunday Times, has a 39.1% stake. Known as a philanthropist and superb networker, Jacob has also taken a great interest in the preservation of fine buildings – he restored Spencer House in St James’s, the former London home of the family of his friend Diana, Princess of Wales, and was instrumental in the refurbishment of Somerset House in central London.

Like most Rothschilds, he shuns the limelight – except on his own terms. He was appointed a member of the Order of Merit in 2002.

His much younger half-brother, Amschel Rothschild, was groomed to head the family bank, but the pressure proved too much for him. He hanged himself in a Paris hotel room in 1996, leaving a widow, the former Anita Guinness, and three children. Their elder daughter, Kate, is married to Ben Goldsmith, son of Sir James; the younger, Alice, has been linked to Ben’s married brother Zac.

A distant cousin, Raphael de Rothschild, also died tragically four years after Amschel – in his case of a heroin overdose in New York.

The current head of the Rothschild banking empire is David de Rothschild, who was born in New York, to which his parents had fled from France when the Nazis seized their family home. Though the family returned to France, his father, Guy de Rothschild, was to flee again to America in high dudgeon when Banque Rothschild was nationalised by François Mitterrand in 1981.

David later obtained a banking licence for himself and eventually won the right to use the Rothschild name again. He now lives near the Normandy town of Pont-L’Eveque, where he served as mayor for 18 years. His properties include the Chateau Lafite-Rothschild vineyards.

5 responses to “That Rothschild clan in full: eccentricity, money, influence and scandal”