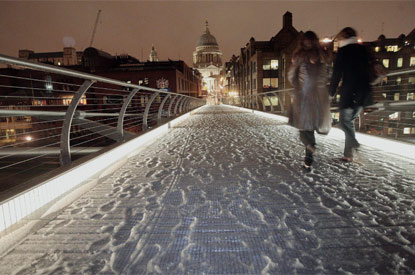 The Arctic has been experiencing very cold temperatures this year

Londoners today woke up to the earliest snow cover for more than 70 years as a freezing blast of wind from the Arctic hit the capital.

Snow fell across much of the city from around 10pm, despite Met Office predictions that the city would escape the wintry showers that have swept across the north of England and Scotland leaving a thick covering.

In Brent, a heavy snow flurry caught residents by surprise as streets and cars were quickly covered in a white blanket. Graduate Charlotte Hussey, 21, said: “I was really excited and surprised, it was like Christmas had come early. I am going to go to the park today to build a snowman and go sledging.”

Amid the snowfall, a man was taken to hospital after his car skidded off the M25 near Enfield. The Renault rolled over before landing in a ditch.

The cold snap with its widespread frost and crisp air is being caused by air from the Arctic replacing the normal south-westerly Atlantic breezes. “What we saw was the back edge of a weather system being blown down from the Arctic catching London,” said Byron Chalcraft, a Met Office forecaster. 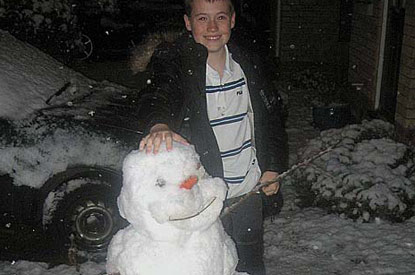 Smile: this boy took advantage of the early snowfall

“The Arctic has been experiencing very cold temperatures this year, so it was an unusually cold front. Some unusual wind patterns meant it was blown over Britain very quickly, meaning the temperatures stayed very low. It is certainly very, very unusual to see snow in London this early,” said Mr Chalcraft. “The last time there was October snow [in the South-East] was in 1974, but the last time we actually had snow cover in October [in London], which we did late last night, was in 1934.”

Forecasters had earlier said there was a chance that London could see “a couple of flakes” but some areas saw a couple of inches fall in two hours.

They said the worst had passed but warned temperatures are set to stay low for the week. Much of snow had melted by this morning, giving way to a bright, cold day with plenty of sunshine.

This entry was posted in Environment, Global Warming Hoax. Bookmark the permalink.