German and British officers united by Freemasonry in WWII epic 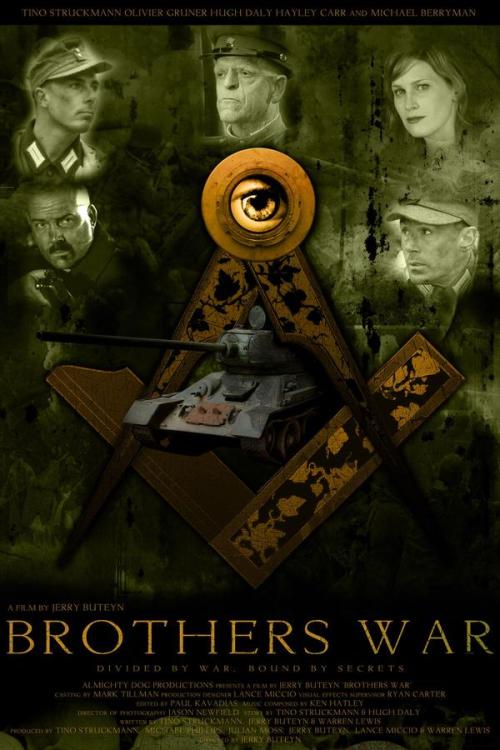 Set against the backdrop of the closing days of WWII, the film tells the story of two officers, one German, one British — foes, who find common ground in Freemasonry and join forces to save Europe from a new war. Struckmann, who found his way to acting and filmmaking via a circuitous route in the military, paid strict attention to historic accuracy and military detail in the production. The gripping film accurately portrays the horrors and heroism of desperate battles at the end of the war and also gives the viewer insights into the true secrets of the ancient order of the freemasons, bound by honor, oath and secrets

Tino Struckmann has appeared in several films and TV shows, also known as the former bodyguard to the stars and as the well-known author of the book Stalked, and is now the CEO of Almighty Dog productions.

This winter, Struckmann will go into production on Grave Goods a thriller written and directed by Warren Lewis. Grave Goods, best described as Helter Skelter meets No Country For Old Men, is a chilling tale in which the re-opening of the investigation of brutal ritual murders of the recent past leads to the revelation of secrets that should have remained buried.

Along with the talented cast and crew who banked on the potential success of Brothers War, Scott Jones, president of Artist View Entertainment, is another believer. “Artist View is very pleased to add Brothers War to our Fall 2008 line-up. The film has real potential in the worldwide market boosting great writing, solid acting and a first class, high quality sound track. The EFX are exception and I can honestly say it is one of the best independent films I have seen this year.”

Based on the real life events of the massacre of the polish government in the closing days of World War 2, Brothers war follows two men, joined by a common Masonic background. They are bound by oath and honor to get word of the massacre through the Russian and German lines to the allied high command.

The story is set in the latter days of World War 2, against the backdrop of fierce combat on the eastern front. Brother’s War is based on real events. The western Allies push into Germany and the Red Army is fights its way towards Berlin. Churchill is worried about Russia’s post-war plans for Europe but most not endanger the increasingly threatened alliance between the west and Russian A British military attached to the Red Army discovers a Russian war crime against the Polish government in exile and is seized by Stalin’s feared intelligence service. He finds unexpected help from an enemy and fellow prisoner a German Captain. They discover a common bond in freemasonry and are bound by honor, oath and secrets. They are joined by Anna, a beautiful Polish nurse cast adrift on the tides of war. The three are pursued by A Ruthless Russian commander through Germany caring a secret that can change the outcome of the world and the fate of millions. Brother’s War was produced with strict attention to historic accuracy and military detail and portrays the horrors and heroism of desperate battles. The film also opens the door into the ancient order of the freemasons and presents unmatched insight on the real histories of these men, brothers all, who have fought in every war for hundreds of years.

Based on real events, the setting for Brother’s War is the Eastern Front during the final days of World War II. In the midst of fierce fighting, as the Western Allies and the Russian Red Army make their advance toward Berlin, a British Army Officer attached to the Red Army discovers a secret that can shatter the unity of the Allies.

Seized by Stalin’s dreaded Intelligence Service, he finds unexpected help from an enemy and fellow prisoner, a German Captain. A common bond through Freemasonry binds the two Officers by honor, oath and secrets. Joined by Anna, a beautiful Polish nurse cast adrift in the tides of war, the three are pursued by a ruthless Russian Intelligence Officer intent on preventing them from reaching Allied Command with their secret which could change the course of the war and the fate of millions.

It is believed that many of the top leaders in Germany during the war had been Freemasons, Heinrich Himmler took a great interest in the organization and it was said that Göring was a Mason as well. When the war ended and the Red Army occupied Berlin, the Soviets took possession of all the Masonic regalia in the museum and send it to Moscow where it was stored until the 1990’s, at which time the regalia was returned to the European Lodges from which it had been siezed by the SS during the War. 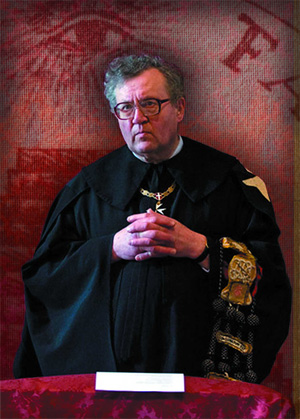 His Most Eminent Highness Fra’ Matthew Festing, Prince and Grand Master of the Sovereign Military Hospitaller Order of St. John of Jerusalem, of Rhodes and of Malta, Most Humble Guardian of the Poor of Jesus Christ

Zatlers to meet Grand Master of Order of Malta

(Riga, 28.10.2008) Today in Riga Castle, President Valdis Zatlers will hold a meeting with His Most Eminent Highness Fra’ Matthew Festing, Prince and Grand Master of the Sovereign Military Hospitaller Order of St. John of Jerusalem, of Rhodes and of Malta.

After the meeting Zatlers and Festing will hold a joint press briefing, as the President’s Press Office informed LETA.

At 11 a.m. the Grand Master of Order of Malta, together with President, will lay a wreath of flowers by the Freedom Monument, at 7 p.m. Fra’ Matthew Festing will participate in a state dinner, organized in his honor by the president.

The president’s Chapter of Orders have decided to grant 10 Latvia’s state highest State Awards to members of the Order of Malta. The Grand Master Fra’ Matthew Festing will receive the First Class Order of the Three Stars.

Grand Master of the Knights of Malta Matthew Festing of Britain (L) shakes hands with Latvia’s President Valdis Zatlers during their meeting in Riga October 28, 2008.

The president’s public relation advisor, Maija Celmina, confirmed to LETA that the Order of the Three Stars will be bestowed during the framework of the Grand Master Fra’ Matthew Festing’s visit to Latvia, which will last until October 31.

The Latvian Foreign Ministry points out that signing the memorandum will enhance the development of cooperation between Latvia and Malta by diversifying cooperation in the social, humanitarian and health care sectors, as well as setting the framework and guidelines for further relations in the future.

This handout picture supplied by Observatore Romano shows Pope Benedict XVI greeting the new Grand Master of the Knights of Malta, Matthew Festing of Britain (R) during a meeting at the private library of the Pope in Vatican City on June 23, 2008.

Fra’ Matthew is the son of Field Marshal Sir Francis Festing (Chief of the Imperial General Staff and also a knight of the Order of Malta) and of his wife, Mary Cecilia Riddell (elder daughter of Cuthbert David Giffard Riddell, of Swinburne Castle, Northumberland). His mother’s family are an old recusant family. He is also descended from the Blessed Sir Adrian Fortescue, a Knight of Malta, who was martyred in 1539. Fra’ Matthew has several brothers, Major Michael Festing and Andrew Festing (current President of the Royal Society of Portrait Painters).

Fra’ Matthew served in the Grenadier Guards and holds the rank of colonel in the Territorial Army. He was Acting Colonel of the Northumbria Army Cadet Force. In June 1998 he was made an Officer of the Order of the British Empire by Queen Elizabeth, for whom he has served as a Deputy Lieutenant in the county of Northumberland.

Fra’ Matthew is a patron of the Sandhurst Foundation and a trustee of the Northumbria Historic Churches Trust. Until 2008 he was the Northumberland representative for the auction house Sotheby’s.

On March 11, 2008, Fra’ Matthew was elected Grand Master during a conclave-style meeting at the Order’s villa on Aventine Hill in Rome. He is the third British Grand Master of the Order, immediately succeeding the second, Fra’ Andrew Bertie. (The first was Hugh Revel in 1258).

Latvian Order of the Three Stars

The Three-Star Order (Order of the Three Stars) was established in 1924 to commemorate the founding of the Latvian State on November 18, 1918. The Order’s motto is Per aspera ad astra (Through thorns toward the stars), as testimony to the fact that great achievements are often attained in the face of adversity, toil and suffering. The Order is conferred in recognition of outstanding civil merit in the service of Latvia.

I – Commander of the Grand Cross;

The cross of the Order is a white enamel Maltese cross set in gilded edges. A round, cobalt-blue enamel medallion with three golden, five-pointed stars encircled by a golden ribbon graces the centre of the cross. The reverse centre of the cross is a gilded medallion with the inscription LATVIJAS / REPUBLIKA / 1918. G. 18. NO-VEMBRIS (Republic / of Latvia / November 18, 1918). An encircling golden ribbon bears the motto PER ASPERA AD ASTRA.

The cross of the Order is suspended from a golden wreath.

Order of the Three Stars

Order of the Three Stars (Latvian: Triju Zvaigžņu ordenis) is order awarded for merits in service for Latvia. It was established in 1924 in remembrance of founding of Latvia. Its motto is “Per aspera ad astra”. The Order has five ranks and three grades of medals of honour.

The cross of the order is white enamel cross within gilded edges. In the center of the front side of the cross there is blue enamel medallion with three golden five-point stars on it. The reverse side has gilded medallion with inscriptions “Per aspera ad astra” and “Latvijas Republika — 1918.g.18. novembris” (English: Republic of Latvia – 18 November 1918). The order has five classes:

The Stars are first and second rate orders. The first rate order and the second rate order, (the great star and the small star, respectively) have similar design and differ only in size. The stars are in shape of five point star made of silver with blue enamel medallion with three golden five-point stars in its center. On its edge there is inscription “Par Tēviju” (English: For Fatherland).

Chain of the Order

Chain of the Order is awarded to Commander of the Grand Cross in exceptional cases. It has ten gilded links with alternately chiseled images of three stars, fire-cross, lion and griffin.

Medal of honour is a round medal on front of which the cross of the order is depicted. The reverse side has inscription “Par Tēviju” with flaming heart below the inscription. It has wreath of oak leaves on its edge. The medal of honour has three grades – gold, silver and bronze.