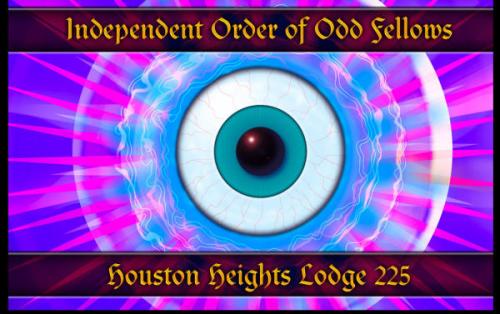 The Odd Fellows got their start (and weird symbolism) by doing good works, such as burying the dead and looking after orphans.

Rufus still thinks that the Iron Maiden looks satanic — which, to a retired minister, is a bad thing. But soon after Kenny installed the toggle switch, Rufus began teaching him the Odd Fellows’ forgotten rituals: ancient secret handshakes, special songs and ceremonies that disappeared from most lodges decades ago.

He shows off the props used in the Odd Fellows initiation — weird stuff, he says happily, pointing to a half-sized casket with a skeleton inside. I’d heard rumors of a stuffed goat, but Kenny jokes he can’t show it to nonmembers: “Then we’d have to kill you.”

Find us some new members, the old guys told Ramon Martin, who was by several decades the youngest member of Odd Fellows Lodge 225 in the Houston Heights. That lodge had been around for a century, but like fraternal groups across the country — the Elks, Jaycees, Shriners — the Odd Fellows had largely failed to attract new generations. The old guys were afraid Lodge 225 would die with them.

Ramon, a musician, tried recruiting history buffs and battle re-enactors. (Such great old costumes and photos at this lodge!) He tried recruiting Goths. (Floating eyeballs! Coffins! Other weird old symbols!) But none of those recruits stuck.

Ramon mentioned the lodge to some art-car people he knew. They thought it was cool, and they brought friends.

But he didn’t expect that crowd to stick, either.

“Look!” says Kenny Browning, sticking out his foot. “Skull camo!” When I look closely at his Chuck Taylor sneakers, I see little skulls grinning among the gray blotches. The shoes will look great with one of his art cars.

Seven years after Ramon began his recruitment drive, Kenny is the Heights lodge’s Noble Grand — which is to say, its grand poohbah — and he’s an obvious symbol of the Odd Fellows’ odd comeback. The lodge claims 45 members and is growing fast. This year, it’s on track to become the largest Odd Fellows lodge in Texas.

Tonight’s gathering, a potluck to welcome prospective members, is sneakers-and-shorts casual. About 30 lodge members stand around, drinking beer and cheerfully arguing over which recent volunteer stint provoked the most sweat: outdoors, tending graves at Olivewood Cemetery, or indoors, loading food in an unair-conditioned warehouse for the Houston Food Bank. Most members are in their 40s and 50s. For the Odd Fellows, that constitutes a youthquake.

The Bible usually stands on a centerpiece. Julio Cortez: Chronicle

Kenny himself is a plumber, co-owner of an outfit that installs tankless water heaters, but he’s better known for art cars. His giant rusty roach may be the most recognizable vehicle in Houston, but he’s just as proud of the Iron Maiden, a black Jeep with enormous stainless-steel snakes writhing over the wheel wells. It looks like Satan’s own all-terrain vehicle.

Explanations of the Odd Fellows name vary. Kenny likes to say the international organization began as a traditional tradesman’s guild, except that it was composed of different trades. Many villages, he says, were too small to support more than one or two people in a given profession, so tinkers, tailors, bakers and whatnot joined forces. They became a band of “odd fellows” — a group composed of distinct individuals.

Kenny leads his newbies up the staircase. The lodge, a two-story brick building, doesn’t look like much from the outside, and downstairs, it’s downright dumpy. Upstairs, where nothing has changed much in a hundred years, is where the action is. Kenny quotes a lodge member: “It smells like ghosts.”

In the costume room, he pauses beside a rack of embroidered robes, most from the ’20s. Some have always resided at this lodge; others came from eBay, which Kenny and Ramon troll faithfully. For formal meetings, lodge members don robes worn by their forebears.

“How cool is that?” Kenny asks.

He shows off the props used in the Odd Fellows initiation — weird stuff, he says happily, pointing to a half-sized casket with a skeleton inside. I’d heard rumors of a stuffed goat, but Kenny jokes he can’t show it to nonmembers: “Then we’d have to kill you.”

The lodge’s new members adore the Odd Fellows’ old-school secret-society paraphernalia, such as these robes from the 1920s. Julio Cortez: Chronicle

Military-style uniforms hang on a rack across from the robes. Kenny explains that he and other Odd Fellows wear them for flag ceremonies, such as Texas Independence Day at the San Jacinto Monument. The Heights Odd Fellows took over that stately traditional ceremony more than five years ago, after an Elks Lodge became too depleted to carry it out.

“You?” I ask Kenny, whose sneakers bear skulls and whose car could belong to Satan. “You wore a military uniform?”

“Yeah,” he says. “Ramon played the bagpipes. I carried the American flag.”

He grins — he knows full well that it’s strange — but he sounds proud. Just plain proud. No irony at all.

In the lodge’s grand meeting room, Kenny points to his seat, an enormous wooden throne. Lesser poohbahs — the Past Grand, the Warden, the Chaplain — are assigned smaller thrones.

At meetings, Kenny’s right-hand man (which is to say, the Noble Guardian Right Supporter) is Rufus Bryant, an Odd Fellow for 40 years and one of the last surviving old-timers. Rufus, a retired preacher, hardly ever misses a gathering, but he’s sick tonight. Kenny wishes he were here.

Even when Rufus is in good health, his hands shake — so much so that he’s broken keys trying to unlock his car. After one meeting, he broke a key in his ignition. Kenny fixed the problem by installing a toggle switch so Rufus wouldn’t need a key anymore. Kenny thought it was the kind of thing one lodge brother ought to do for another.

The switch made Rufus’ life easier. Nobody, he told Kenny, had ever done anything like that for him before.

Rufus still thinks that the Iron Maiden looks satanic — which, to a retired minister, is a bad thing. But soon after Kenny installed the toggle switch, Rufus began teaching him the Odd Fellows’ forgotten rituals: ancient secret handshakes, special songs and ceremonies that disappeared from most lodges decades ago.

He used to think that fraternal lodges were for old farts, people his parents’ age.

On his sneaker, the skulls grin back.

• Odd Fellows’ early history is hazy, but newspaper accounts of Odd Fellows groups date to 18th-century England. Working men pledged to provide a social safety net for each other’s families, promising “to bury the dead” and “to educate the orphan”

• The “burying the dead” pledge accounts for the group’s skull and coffin icons.

• Texas’ first Odd Fellows lodge debuted in Houston in 1838, two years after the city was founded. 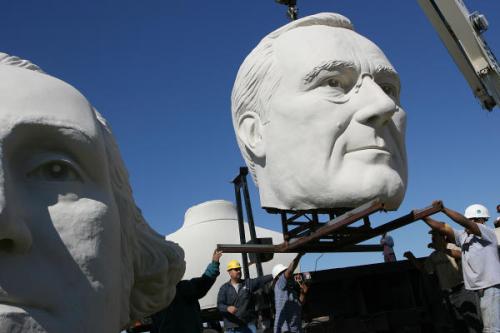 FDR’s New Deal programs, such as Social Security, may have been based on Odd Fellows principles. Mayra Beltran: Houston Chronicle

This entry was posted in Uncategorized. Bookmark the permalink.