Discrimination against white males will soon be encouraged

DISCRIMINATION against dominant white males will soon be encouraged in a bid to boost the status of women, the disabled and cultural and religious minorities.

Such positive discrimination — treating people differently in order to obtain equality for marginalised groups – is set to be legalised under planned changes to the Equal Opportunity Act foreshadowed last week by state Attorney-General Rob Hulls.

The laws are also expected to protect the rights of people with criminal records to get a job, as long as their past misdeeds are irrelevant to work being sought.

“Clearly, they will have their position changed because they will be competing in a different way with these people who have been traditionally marginalised,” she said.

“Let’s open it up so everyone can have a fair go.”

Victoria’s peak business body expressed concern yesterday about the need for the proposed laws, and questioned if they would undermine the right of companies to make legitimate business decisions.

At present, individuals or bodies wanting to single out any race or gender for special treatment must gain an exemption from VCAT.

Companies and public bodies accused of discrimination can only be held to account after a complaint has been made.

But the proposed changes go much further, allowing the commission to inquire into discrimination, seize documents and search and enter premises after attempts to bring about change have failed.

Businesses and individuals would be required to change their ways even if a complaint had not been received.

Action could be taken where an unlawful act was “likely to occur”, not just in cases where discrimination has taken place.

The commission would also have real teeth to enforce its rulings via VCAT and, as a last resort, in the courts.

The changes, shown in a Department of Justice report by former public advocate Julian Gardner, would also:

EDUCATE people so they know their rights.

GIVE more protection to people with disabilities, requiring companies and public entities to reasonably accommodate their needs.

GRANT the homeless and people who act as volunteers better protection from discrimination.

“But I am concerned and curious about whether these changes mean the commission can second-guess the legitimate business decisions of individual businesses,” he said.

The first raft of changes to the Equal Opportunity Act were introduced into Parliament last week.

Sometime before 4 a.m., the mercury at Seattle-Tacoma International Airport dipped to 19 degrees, besting the record low of 20 degrees set for this day 44 years ago. And the cold isn’t over yet.

Think it was cold this morning?

Sometime before 4 a.m., the mercury at Seattle-Tacoma International Airport dipped to 19 degrees, besting the record low of 20 degrees set for this day 44 years ago.

And the cold isn’t over yet.

Our next best chance of breaking a low-temp record will come Friday — if the forecast holds true with an anticipated 16-degree low. That would be one degree colder than the record low of 17-degrees set for December 19 in 1990, according to the National Weather Service in Seattle.

What’s more, there’s at least an 80 percent chance of snowfall between 6 a.m. and 6 p.m. on Wednesday.

Thankfully, the recent cold snap across the Seattle area hasn’t been accompanied by high wind.

“We get cold weather but this is definitely not normal for this time of year,” he said, noting that we’re averaging temperatures that are 10 degrees colder than the 36-degree average temperatures typically seen in December. 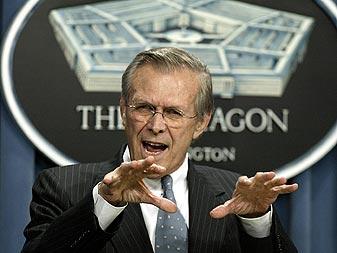 By SCOTT SHANE and MARK MAZZETTI

The report was issued jointly by Senator Carl Levin of Michigan, the Democratic chairman of the panel, and Senator John McCain of Arizona, the top Republican. It represents the most thorough review by Congress to date of the origins of the abuse of prisoners in American military custody, and it explicitly rejects the Bush administration’s contention that tough interrogation methods have helped keep the country and its troops safe.

The report also rejected previous claims by Mr. Rumsfeld and others that Defense Department policies played no role in the harsh treatment of prisoners at Abu Ghraib in late 2003 and in other episodes of abuse.

The abuse of prisoners at Abu Ghraib, the report says, “was not simply the result of a few soldiers acting on their own” but grew out of interrogation policies approved by Mr. Rumsfeld and other top officials, who “conveyed the message that physical pressures and degradation were appropriate treatment for detainees.”

By the time of the abuses at Abu Ghraib, Mr. Rumsfeld had formally withdrawn approval for use of the harshest techniques, which he authorized in December 2002 and then ruled out a month later. But the report said that those methods, including the use of stress positions and forced nudity, continued to spread through the military detention system, and that their use “damaged our ability to collect accurate intelligence that could save lives, strengthened the hand of our enemies, and compromised our moral authority.”

Most of the report, the product of an 18-month inquiry and interviews with more than 70 people by committee staff members, remains classified. But the 29-page summary offers the clearest timeline to date linking the acts of Mr. Rumsfeld and other Pentagon officials to abusive treatment in the field.

A spokesman for Mr. Rumsfeld, Keith Urbahn, said a dozen earlier investigations had found no such connection, and he dismissed the report as “unfounded allegations against those who have served our nation.”

“Because of irresponsible charges by a few individuals in positions of responsibility in Congress, millions of people around the world have been led to believe that the United States condones torture,” Mr. Urbahn said.

Committee staff members said the report was approved by a voice vote without dissent, but only 17 of the committee’s 25 members were present for the vote. Mr. McCain, who was tortured while he was a prisoner of war in North Vietnam, has been an outspoken opponent of harsh interrogation tactics, but some other Republicans have defended such methods as legal and necessary.

Many of the particulars in the summary were made public at hearings the committee held in June and September, including the fact that members of President Bush’s cabinet discussed specific interrogation methods in White House meetings.

The report documents how the military training program called Survival, Evasion, Resistance and Escape, or SERE, became a crucial source for interrogations as the Bush administration looked for tougher methods after the 2001 terrorist attacks.

The SERE training was devised decades ago to give American military personnel a taste of the treatment they might face if taken prisoner by China, the Soviet Union or other cold war adversaries. “The techniques were never intended to be used against detainees in U.S. custody,” Mr. Levin said in a statement.

In his statement on Thursday, Mr. McCain called the adoption of SERE methods “inexcusable.”

The report found that senior Defense Department officials inquired about SERE techniques for prisoner interrogations as early as December 2001, when the war in Afghanistan was weeks old and American troops were just beginning to capture people suspected of being members of the Taliban and Al Qaeda.

In September, the committee released a December 2001 letter from the head of the Joint Personnel Recovery Agency, which runs the SERE program, to a deputy of William J. Haynes II, the Pentagon’s general counsel, saying the agency’s officials “stand ready to assist” Pentagon efforts at prisoner “exploitation.”

The committee’s report says little about the Central Intelligence Agency, except to note that that agency also drew on the SERE program for harsh methods it used in secret overseas jails for Qaeda suspects. The C.I.A. has said it used waterboarding, a method of near-drowning previously used in the Navy’s SERE program, on three captured terrorism suspects in 2002 and 2003.

Unlike the military, the C.I.A. is still permitted to use some coercive methods, though the precise rules are classified. The agency has said that it no longer uses waterboarding.