Afghan parents are selling their sons to wealthy women unable to have their own. The plight of many Afghans is now so desperate that selling a child is increasingly routine.

The trade in children is spurred by the battered country’s economy and the failure of foreign aid to reach beyond the coffers of central government in the capital Kabul.

While girls are are rarely traded, boys can fetch substantial sums – at least in the eyes of the poor couples who give up a child simply to allow the rest of the family to survive.

A cameraman working for Channel 4 News, Mehran Bozorgnia, witnessed the sale of an eight-year-old boy, Qassem, to Sadiqa, a wealthy woman from Kabul, outside the northern city of Mazar-e-Sharif.

As the meeting began, the boy’s father, Nek Mohammed, knew he only had a final few moments with his son. Sadiqa was business-like. “Kiss your father and mother goodbye now – it is time,” she said, before handing over $1,500 (£1,000). Mr Mohammed began to weep.

The translator accompanying the cameraman said: “Sadiqa, this is wrong!”

“Yes you’re right. It’s cruel, ” she replied, before claiming: “But I have two aims here. First, to give this boy a bright future and a good education. And second, to save their other children. The winter’s coming and I’ve given them money so the children don’t die of hunger.” 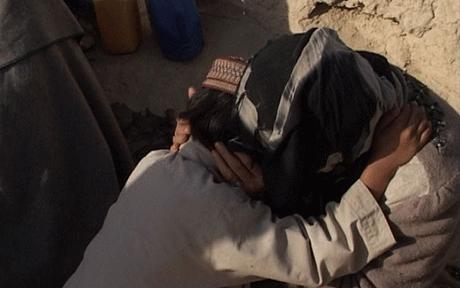 ‘Kiss your father and mother goodbye now – it is time,’ he was told as his purchaser handed over $1,500 Photo: CHANNEL 4 NEWS

Mr Mohammed said: “I sold a piece of my heart to stop my four other children dying of hunger. I don’t have an elder son. I’m also sick.

“My kidney is failing. My body is in pain.”

For Mr Mohammed, selling a child was the only way to keep his other children alive.

The plight of many Afghans is now so desperate that selling a child is increasingly routine. But there is another threat to the welfare of the young – and their parents.

Afghanistan’s boom business is kidnapping. At least 180 documented abductions in the past seven months in Kabul alone. The going rate is around $50,000 (£34,000) to release the sons of the wealthy.

One kidnapper in Kabul who would speak openly about his trade said that he had no problem targeting the rich.

“We’re not dealing with poor people,” said the man, who claimed his name was Mateen Khan. “We are only going to kidnap people who have foreign money from all around the world and who have taken it for themselves.

“We are going to take their children. You see their six year olds sitting in the back seat of a Lexus – the latest models. People abroad couldn’t afford these cars. So we kidnap these type of children to get the money off their families – the money they’ve stolen.”

In a stable he showed off a teenage boy, who was blindfolded and bound and plainly terrified.

Although he said his gang has no formal ties to the Taliban, his admission that he does business with them appeared to confirm speculation surrounding the Islamist group’s involvement in the trade in children.

His threats were all made within earshot of the teenager, whose fate is unknown.

4 responses to “Afghan parents selling their sons to survive”