The new tentacular vehicle trap is known as SQUID, for Safe Quick Undercarriage Immobilization Device. It is the brainchild of Martín Martínez, president of Arizona-based Engineering Science Analysis (ESA) Corporation. ESA developed the SQUID under the auspices of the DHS Science and Technology directorate small-biz programme.

“SQUID was inspired by a sea creature and a superhero,” says Martínez. DHS S&T boffins see it as the answer to that age-old question:

“What if — like sea monsters of ancient lore — a trap could reach up from below to ensnare anything from a MINI Cooper to a Ford Expedition?”

The Spidey/cephalopod combo bomb comes in the form of a round canister about the size of a largeish pie or cake. A policeman or other minion of the state can lay it in the path of vehicle-mounted miscreants, terrorist suicide bombers, wouldbe huddled masses attempting to illegally live the American dream, etc.

Having retired to a safe distance clutching his SQUID remote, the copper arms the device. Half a second before the speeding malefactors pass over it, he triggers it. A gas cartridge similar to that in a car airbag fires, unrolling barbed straps in all directions using a design modelled on that of kids’ party squeakers.

As the tyres pass over the straps, the barbs dig in and the straps wrap around the axles. Meanwhile a second charge, triggered by engine heat passing overhead, deploys “sticky tendrils” from the canister, now beneath the vehicle.

The tendrils ensnare the trailing ends of the wheel-barb straps, causing them to wrap around any central driveshaft in the case of rear-wheel-drive vehicles. The tendrils and straps then break away from the canister, leaving it in the road.

The straps tighten as the wheels keep turning, and the tendrils stretch, gradually absorbing the vehicle’s kinetic energy and bringing it to a halt within 500 feet according to the DHS S&T people.

The SQUID is reckoned to be better than ordinary tyre-bursters as it brings a vehicle to a halt more surely and under control. It beats current elastic barriers, too, which can’t stop the massive pickups and four-wheel-drives favoured by many American villains. However, the federal moto-kraken designers admit it still needs work.

“We must make it lighter,” says Mark Kaczmarek, DHS Q-branch official in charge of the SQUID programme. “Also, more affordable, so it becomes the stopper of choice, regardless of budget.”

Early Friday morning the temperature in Rockford fell to -25 degrees, breaking the old daily record low of -24 set back in 1982.

With winds dying down across Illinois, the National Weather Service expired its wind chill warnings around the state. On Friday, temperatures as cold as 32 below zero, were recorded in Polo and Dixon.

The good news is forecasters say our temperatures will slowly start to climb all day and night as we head into Saturday. The bad news is more snow is in the forecast for Saturday.

To the left of this story we have several links to resources you can use to survive this historic arctic blast of cold weather. 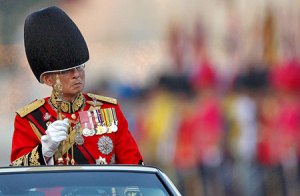 King Bhumibol Adulyadej of Thailand has received an award from the United Nations for his commitment to promoting intellectual property rights and his contribution to society as a prolific inventor.

“In sharing the fruits of your creativity in the form of invention and musical and artistic works, Your Majesty has not only demonstrated the power of intellectual property to enrich and enhance the quality of daily life and work but has also encouraged people everywhere to create, respect and protect it,” said WIPO Director General, Francis Gurry.

Many of the King’s inventions, which include a water aerator and artificial rainmaking technology, have generated concrete and practical benefits for rural communities in Thailand.

The King was honoured at the Klai Kangwon Palace in Hua Hin, Thailand, with members of the Privy Council, ministers, senior officials and a high level WIPO delegation in attendance.

WASHINGTON – Uncle Sam wants you, and in a poor economy, you might want Uncle Sam, too.

The Pentagon is hiring, and having less difficulty doing so than in flush economic times. The Army and each of the other branches of the military are meeting or exceeding their goals for signing up recruits, and attracting more qualified people.

Last year was the first since 2004 that all active-duty and reserve forces met or passed recruiting goals. That’s particularly notable for the Army, the service hit hardest by combat casualties in Iraq and by long and repeated overseas assignments that began in earnest in 2004. That was the first full year of combat in Iraq and the year that it became clear that the war would be much longer and bloodier than the Bush administration had expected.

Figures released last week suggest that as President-elect Barack Obama takes office the trends that make military careers more appealing will continue. Besides the sagging employment figures in a recession, those factors include Obama’s campaign pledge to pull combat forces out of Iraq in 16 months and the drop in violence there. Obama has said he will add forces in Afghanistan, but that war is unlikely to strain military manpower and money as the Iraq conflict did.

For December, the Army signed 860 new active-duty soldiers, 115 percent of its target number of 750 enlistees. The Army also met or passed goals for October and November, meaning it has done so for the entire first quarter of budget year 2009.

The Army figures are still smaller than those for other services, in part a reflection of the much more difficult task that is Army recruiting. An Army recruiter generally talks to dozens, sometimes hundreds, of young people before signing up a willing and qualified recruit.

“The success of our all-volunteer force begins with recruiting. Recruiting is always a challenge, but a tighter job market provides more opportunities to make our case,” said Pentagon spokeswoman Lt. Col. Almarah Belk.

The military offers competitive salaries, plus good education benefits and job skills for a civilian career, she said.

“Regardless of the economy, the quality of our troops remains high, and we expect that to continue.”

For several years, as the Army in particular struggled to meet its recruiting needs, military officials have cited a strong economy as one obstacle to attracting young people looking at their employment options. It is one reason that over the past year the Army and Marine Corps felt compelled to pay more than $600 million, combined, in bonuses and other financial incentives to entice recruits.

Another negative factor: Parents and others who influence the decisions of enlistment-age men and women have, since the outset of the Iraq war, become less inclined to recommend military service.

“We do benefit when things look less positive,” in the civilian economy, David Chu, the Pentagon’s personnel chief, told reporters when announcing the 2008 success last year.

The military needs any break it can get on recruiting, particularly since it is in the midst of a push to substantially increase the size of the nation’s ground forces — a decision driven by an urgent need to reduce the strain on troops and their families from repeated deployments to Iraq.