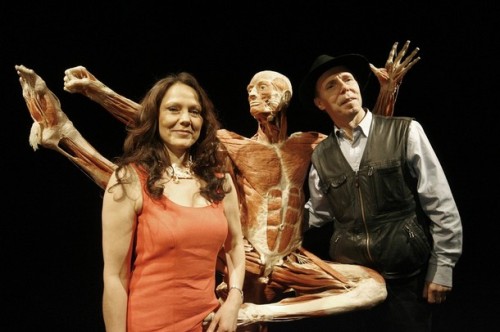 “We have discussed whether it is proper to show homosexuality and in what way. This is a very delicate subject.”

“It’s not my intention to show certain sexual poses. My goal is really to show the anatomy and the function,” Body Worlds creative director Whalley told Reuters in an interview, adding the sex exhibition may open next year.

Body Worlds exhibitions, visited by 27 million people across the world, have been criticized for presenting entire corpses, stripped of skin to reveal the muscles and organs underneath, in lifelike and often theatrical positions.

German politicians called the current “Cycle of Life” show charting conception to old age “revolting” and “unacceptable” when it showed in Berlin earlier this year because it included copulating cadavers.

The way a plastinate is exhibited can vary from country to country to reflect local sensibilities. A vote of local employees decided that one of the copulating female cadavers should wear fewer clothes in Zurich than was the case in Berlin.

“Switzerland is the first country that already said from the outset that we could show whatever we wanted,” said von Hagens.

“Zurich is ready … but it’s maybe not so easy in every other town,” he said. “We have discussed whether it is proper to show homosexuality and in what way. This is a very delicate subject.”

Von Hagens and Whalley said they both intended to donate their bodies for plastination, but would not leave instructions about how to display them, dismissing this as vanity.

“I find it a great opportunity to give something to others by donating my body, namely self-awareness,” said Whalley.

Von Hagens said he and some other body donors even saw plastination as an alternative to burial or cremation, giving them more certainty about would happen to their bodies after death.

“Cremation for me is hell,” he said.