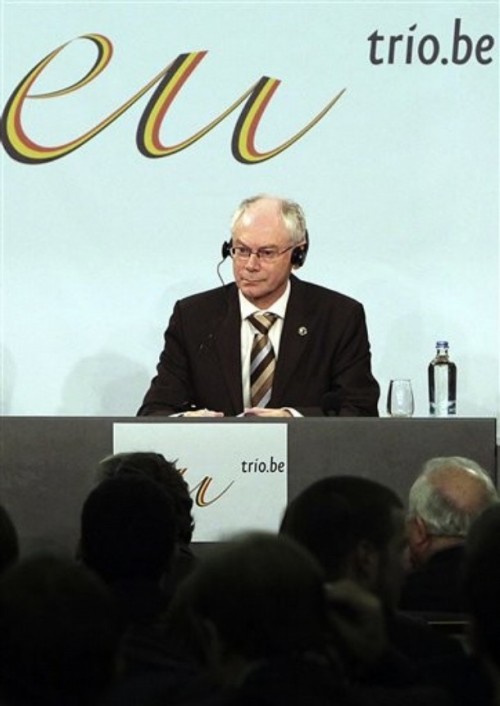 In this Oct. 29 2009 file photo, Belgium’s Prime Minister Herman Van Rompuy participates in a meeting prior to an EU summit in Brussels. Very soon, Europeans from Denmark to Bulgaria will wake up to the reality of having their very first president, one person world leaders can call when they want to talk to Europe. AP Photo

“New resources will be necessary for the financing of the welfare state. Green tax instruments are a possibility.”

The event took place at Val Duchesse, a former priory on the outskirts of Brussels, on Thursday (12 November), with guests including Belgian industrialist and Bilderberg chairman Etienne Davignon, former US secretary of state Henry Kissinger and luminaries from the worlds of international politics and business, according to Belgian broadsheet De Tijd.

The Belgian leader is reported to have said in a speech that: “New resources will be necessary for the financing of the welfare state. Green tax instruments are a possibility, but they are ambiguous: This type of tax will eventually be extinguished. But the possibilities of financial levies at European level must be seriously examined and for the first time the large countries in the union are open to that.”

Mr Van Rompuy’s official spokesman later told the Belga news agency that: “The Prime Minister … indicated that it is necessary to carry on thinking about structural financing at the European level.”

Proposals about imposing fees on environmentally-damaging behaviour or skimming small levies off financial transactions have been mooted before. But the suggestion that the new EU president might interfere in national taxation policy is anathema to anti-federalists in EU countries such as the UK or Denmark.

Mr Van Rompuy’s participation at the Bilderberg dinner will also give ammunition to critics of the EU top job selection process, which takes place via confidential consultations between EU leaders and informal social events.

The Bilderberg group is an elite club of aristocrats, politicians and businessmen dating back to 1954, which likes to meet away from the public eye and which is widely disliked by pro-transparency campaigners.

“As far as I know, Aznar is not currently interested in this kind of position. But I think it would be good for the EU if he changed his mind and submitted his candidature,” Mr Buzek told Spanish daily ABC in an interview published on Saturday.

Mr Buzek met Mr Aznar along with the current Spanish government on a trip to Madrid ahead of Spain taking up the rotating EU presidency in January.

The conservative Spanish politician is from the correct political family according to the prevailing wisdom that the centre-right will take the EU president job while the centre-left will take the EU foreign minister position. But he was a firm advocate of the Iraq war, which remains a highly-divisive topic in the EU.

The speculation is set to see an end on Thursday (19 November) when EU leaders gather in Brussels to decide the top appointments. Other names in line for the presidency post include Dutch leader Jan Peter Balkenende and his Luxembourg counterpart, Jean-Claude Juncker.