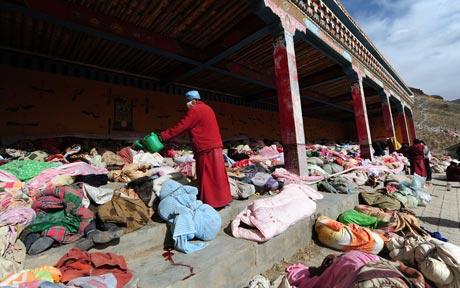 A Tibetan Buddhist monk waters down the deceased at the Jiegu Monastery Photo: AFP / GETTY

Tibetan monks are forced to cremate bodies as the death toll from Wednesday’s earthquake continues to climb.

The number of bodies at the Jiegu monastery contradicts the official death toll.

By Malcolm Moore in Jiegu

The corpses are piled three-deep at Jiegu’s Tibetan Buddhist monastery, perched on the mountain above the earthquake-ravaged town.

“More than a thousand bodies were brought here,” said Ge Laidanzeng, a 20-year-old Tibetan lama at the monastery.

By the side of the monastery, a bright yellow hall open to the air on one side and painted with pink lotuses, was filled with corpses.

Normally used for mass rituals, this hall was the only place large enough to hold so many dead.

“Three hundred have been claimed by relatives, the others we will take care of,” said the young monk.

As he spoke, a family clambered over the pile of bodies, each shrouded in cotton or tarpaulin, eventually claiming their dead mother and loading her body into a minivan.

To one side, thirty lamas chanted sutras, as they have constantly since the bodies began to arrive. More monks swathed the bodies in Tan Cheng prayer flags.

Traditionally, the dead would be given sky burials, their bodies dismembered and then scattered on the top of the mountain for vultures to eat.

“We cannot do this for them,” said Ge. “There are too many for the vultures to eat.”

Instead, the dead will be cremated on Saturday after a prayer service by the head of the Aka monastery, a Living Buddha.

The number of bodies at the Jiegu monastery contradicts the official death toll from Wednesday’s quakes, the largest of which measured 7.1 magnitude, according to the China Earthquake bureau.

On Friday, the official death toll climbed to 760, with a further 243 people missing and 1,174 severely injured.

“I believe at least 10,000 were killed,” said Ge. “There are four other monasteries collecting the dead and they are the same as us,” he said. “Then there are all the people still buried. The government is playing down the figures.”

In residential parts of Jiegu, some survivors were being pulled out of the rubble on Friday, three days after the quake struck.

But they were hugely outnumbered by corpses.

Rescue teams have struggled to reach Jiegu, which lies 12 hours from the nearest major airport and 10,000ft up on the Tibetan plateau.

Li Xiaojun, 22, a firefighter and Alsatian handler, said that his team from the north-western province of Shandong, and their dogs, were struggling to adapt to the altitude after arriving overnight.

“First we scan the debris with the heartbeat detectors, then we send in the dogs,” he said. “However our spirits are low. The dogs’ tails are down. The hopes of finding survivors are pretty slim now.”

At the Saikang monastery, on the fringes of Jieshu, teams of purple- robed monks were working with camouflaged soldiers to search for the hundred monks buried underneath.

“We got here today and immediately started digging,” said Zhayierjilang, a monk from Gansi. “So far, all we have found are bodies though.”

Behind him, Chinese soldiers held up a deer’s head and a belt of bullets they had unearthed. In another ruined house nearby, a small portrait of the young Dalai Lama had been concealed among the beams.

An exodus has begun in Jiegu, with many families travelling on motorbikes, lorries and buses to stay with relatives elsewhere. “All our possessions were destroyed, we will be back, but it is too cold to stay here without food and warm clothes,” said Jiang Junning, 30, who was on his way to the provincial capital of Xining.

For those left behind, the situation is grim. Despite the huge convoys of aid from the Chinese government, many families said they lacked food, water and medicine.

Ten thousand survivors, 90 per cent of whom were Tibetan, had set up camp on the race track outside Jiegu. However, only 16 doctors were on hand from the Red Cross to treat them.

“We are seeing 1,500 people a day, but we don’t have the resources or medicine to travel around the tents,” said one doctor. “When we clean their wounds, they get re-infected by the dust and the unsanitary conditions,” he said, warning that the chance of infections and disease was severe.

In one tent, Yan Zhibing, 26, was sheltering with his wife and six month-old son. “When the earthquake struck, my first thought was to grab my baby son and run. Only later did I realise my wife had been buried.”

His wife lay still in the corner of the tent, a swollen and infected foot visible on the earth and straw floor. “We don’t have medicine for her, and we don’t have enough food. She has not produced any milk to feed the baby for two days, we are desperate,” he said.

Outside, aid convoys were slowly rolling in, but too late for some.

Hundreds of monks at the camp were already chanting the first burial rites for ten more dead, wrapped in cloth and loaded onto vans for the trip up to the Jiegu monastery.

This entry was posted in Buddhism, Disasters. Bookmark the permalink.