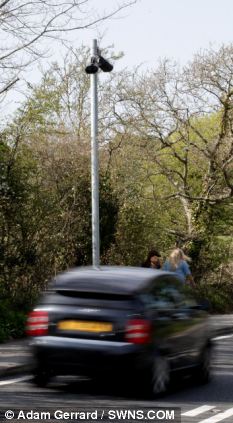 Speed cameras which communicate with each other by satellite are being secretly tested on British roads.

The hi-tech devices can follow drivers’ progress for miles to calculate whether they have broken speed limits.

Combining number plate recognition technology with global positioning satellites, they can be set up in a network to monitor tens of thousands of cars over huge areas for the smallest breach.

Known as SpeedSpike, the system uses similar methods of recognition as the cameras which enforce the congestion charge in London, and allow two cameras to ‘talk’ to each other if a vehicle appears to have travelled too far in too short a space of time.

After a covert national trial which has not been publicised until now, just days after a report showed motorists have been fined almost £1billion in speeding tickets under Labour, authorities hope the new cameras will enable them to re-create the system used on motorway contraflows.

The Home Office is currently testing them at two sites – one in Southwark in London and another on the A374 between Antony and Torpoint in Cornwall.

Details of the secret trials emerged in a House of Commons report and immediately attracted criticism.

Conservative MP Geoffrey Cox, whose Devon constituency is close to the Cornish test site, said fundamental questions had to be addressed before such an ‘alarming’ level of surveillance was extended.

He said: ‘You always have to ask if it is really necessary to watch over people, to spy on them and film them.

‘We will get to a point where it becomes routine and it should never be a matter of routine that the state spies on its citizens.’

The new cameras have been developed by PIPS Technology Ltd, an American-owned business with a base in Hampshire.

In the company’s evidence to the House of Commons Transport Committee, it boasted of ‘number plate capture in all weather conditions, 24 hours a day’ as well as pointing out the system’s low cost and ease of installation.

The company believes the cameras can be used for ‘main road enforcement for congestion reduction and speed enforcement’, can help to ‘eliminate rat-runs’ and cut speeds outside schools.

It said: ‘We have an urban test site at Salter Road in Southwark and are working in conjunction with the Metropolitan Police.

‘We also have an inter urban test site located on the A374 from Torpoint to Antony at which we are working with the Devon and Cornwall Constabulary.’

The trial is being carried out in conjunction with the police and the Devon and Cornwall Safety Camera Partnership.

Superintendent Tim Swarbrick, chairman of the partnership and head of roads policing, said it was being tested ‘on a live road system to assess how effective and accurate it is’.

He added: ‘Average speed recorders have proved to be very successful in roadworks on the major trunk roads. They have reduced injury and deaths and we would like to replicate this positive effect on more rural roads.

‘To this end we are assisting the Home Office in piloting a new version of this equipment to gauge both its accuracy and operational effectiveness.

‘The equipment is not being used for enforcement purposes, as it is not Home Office approved at this stage.’

The Home Office said it was unable to comment on the trials because of ‘commercial confidentiality’.

Last week a report showed that motorists have been hit with speeding tickets worth almost £1billion under Labour.

But receipts have fallen since police were stopped from keeping part of the money raised from speed cameras.

It suggested that the explosion in the number of cameras was used as a ‘cash cow’ and that forces no longer have an incentive to install them.

Drivers were clobbered with 1.23million tickets in 2008, of which 1.03million were issued by speed cameras, the Home Office report revealed.

In total, 16million tickets have been issued since 1997, raising £913million.