Embedded in what looks like a tiny basketball jersey that each student will wear when at school is a radio frequency tag that also uses Wi-Fi. The tag provides a signal to sensors planted throughout the school.

The information from those sensors is displayed in a map of the school, thereby allowing teachers and administrators to know exactly

Parents will digitally sign in and sign out a child, saving teachers from hand filing attendance records required by the state.

Sung Kim of the county’s employment and human services department said 3,000 man hours could eventually be saved with this $50,000 system, which was paid for by a federal grant.

“Within a year we could completely pay off this system from the savings we have with the staffing,” said Kim. “We are the first child care center that is implementing with this technology, but it is already proven technology.” 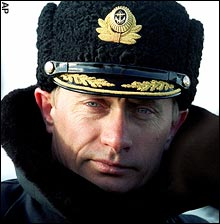 KGB Col Putin: “It’s not the kind of thing you forget.”

MOSCOW – Russian Prime Minister Vladimir Putin on Tuesday paid a visit to a memorial complex dedicated to those people who died at a north Siberian Gulag.

Putin, an ex-KGB employee, laid flowers at the Norilsk Gulag memorial complex and spoke to former prisoners, who told him that up to 500,000 people had passed through the camp between 1936 and 1953.

Stalin Back in Vogue as Putin Endorses History-Book Nostalgia

The premier noted that this was not the first time he had visited the memorial complex.

“It’s not the kind of thing you forget,” he commented.

Norilsk, like other large cities in Russia’s Arctic, was built by Gulag prisoners, and Putin said that he had reminded the management of Norilsk Nickel, the main employer in the city, of this at a meeting earlier in the day.

During the Stalinist purges, millions of people were executed on fake charges of espionage, sabotage, anti-Soviet propaganda or died of starvation, disease or exposure in Gulag labor camps in Siberia and the Far East.

Report: Top execs made more than average when payrolls cut

When Hewlett-Packard’s Chief Executive Mark Hurd resigned last month he received something few regular workers see when they quit their jobs under a cloud: A massive payout.

Turns out Hurd is far from the only top executive to be rewarded with a rich package despite a management performance that could be considered less than optimal — especially by rank-and-file workers.

A new report concludes that chief executives of the 50 firms that have laid off the most workers since the onset of the economic crisis in 2008 took home 42 percent more pay in 2009 than their peers at other large U.S. companies.

The report, from the Institute of Policy Studies, found that the 50 layoff leaders received $12 million on average in 2009, compared with an average compensation of $8.5 million for chief executives of companies in Standard & Poor’s 500. Each of the 50 companies examined in the report laid off at least 3,000 workers between November 2008 and April 2010.

“Our findings illustrate the great unfairness of the Great Recession,” said Sarah Anderson, lead author of the study, “CEO Pay and the Great Recession,” the latest in a series of annual “Executive Excess” reports published by the institute, a progressive think tank. “CEOs are squeezing workers to boost short-term profits and fatten their own paychecks.”

Those CEOs include HP’s Hurd, who slashed 6,400 jobs in 2009 — a year when his compensation amounted to $24.2 million.
Newsweek: When CEOs behave badly

Hurd made headlines last month when he suddenly resigned after an investigation into a sexual harassment claim against him found he had falsified expense reports related to meetings with a female contractor. Despite the findings, he walked away with a severance package that reportedly could be worth more than $40 million.

Fred Hassan of drug pharmaceutical company Schering-Plough received a $33 million “golden parachute” when his firm merged with Merck in late 2009, the report said, even as Schering was laying off 16,000 workers. The report calculates that Hassan’s total compensation for 2009 of almost $50 million could have been used to cover the average cost of these workers’ jobless benefits for over 10 weeks.

Overall, the Institute for Policy Studies calculates that the $598 million total compensation awarded to the top 50 CEO layoff leaders was enough to provide average unemployment benefits to 37,759 workers for an entire year, or nearly one month of benefits for each of the 531,363 workers their companies laid off.

While the details of the report may seem shocking at first blush, it’s worth remembering that a public company’s chief executive has a fiduciary obligation to maximize value for the owners of a corporation — its shareholders.

“This report is not quite as cynical as it seems,” said Dr. Andrew Ward, associate dean at the College of Business at Lehigh University in Bethlehem, Pa.

“We often find CEOs are simply taking action in the face of an economic crisis to reduce expenses,” he said. “The thinking is that, in the future the company’s productivity will increase (and) that it will ultimately perform more efficiently, and this usually garners a positive reaction on Wall Street.”

However, one worrying aspect of the report is the finding that five of the 50 top layoff leaders received taxpayer-funded bailouts. American Express, for example, gave CEO Kenneth Chenault $16.8 million in 2009, including a $5 million cash bonus. American Express has laid off 4,000 employees since receiving $3.4 billion in taxpayer bailout funds, the report said.

“Questions should be asked of the boards of these sorts of companies,” Ward said. “A company’s board has a great deal of responsibility for overseeing CEO compensation.”

Even among their peers, the CEOs examined in the Institute of Policy Studies report were handsomely compensated. They received average increases of 7 percent in 2009 while chief executives in Standard & Poor’s 500 companies saw their pay decline around 11 percent on average, according to the institute’s Anderson.

“What’s clear here is that CEOs who slash thousands of jobs certainly aren’t tightening their belts,” she told CNBC in an interview. “And I would caution that while these layoffs might have boosted short-term profits in terms of cutting labor costs, such cutbacks can have long-term costs for a company in terms of lower morale and the costs associated with hiring workers down the road, so I find it a disturbing trend.”

In the past, many companies rewarded executives with stock options, which had little downside risk and gave corporate leaders a clear incentive to drive up a company’s stock price.

A jury found the Texas-based group negligent for allowing a former assistant scoutmaster, Timur Dykes, to associate with Scouts after he admitted to a Scouts official in 1983 that he had molested 17 boys.

The lawsuits are settled for undisclosed amounts

PORTLAND, Oregon — Six men who alleged they were sexually abused by an Oregon Boy Scouts leader in the 1980s have settled their lawsuits against the group’s national organization for undisclosed amounts, the plaintiffs’ attorney said Wednesday.

The settlements include the case of one man, Kerry Lewis, who was awarded nearly $20 million in damages from Boys Scouts of America in a trial that ended in April. It was believed to be the largest such award against the national youth organization.

A jury found the Texas-based group negligent for allowing a former assistant scoutmaster, Timur Dykes, to associate with Scouts after he admitted to a Scouts official in 1983 that he had molested 17 boys. The verdict came as the Boy Scouts, a congressionally chartered organization, mark their centennial.

In that trial, Lewis’ attorneys used secret files kept by the Boy Scouts to try to demonstrate that the organization dismissed or ignored allegations of sex abuse by Scout leaders for nearly two decades. It was the first time the so-called “perversion files” had been used in a trial.

After the jury’s verdict, the Boy Scouts of America still faced lawsuits from five other men who alleged Dykes molested them.

But an attorney for the five, Kelly Clark, announced his clients and the Scouts have agreed to a settlement.

“This is a great day for Kerry Lewis and for all these men,” Clark said.

Kerry Lewis expressed relief to have the matter settled, saying in a written statement: “On behalf of all six of us, I can say that we are glad this is over.”

The Boy Scouts have settled sex abuse lawsuits out of court before, although the exact number is not known because not all are announced.

But an expert on the subject, Patrick Boyle, has said that from 1984 through 1992, the Scouts were sued at least 60 times for alleged sex abuse, with settlements and judgments totaling more than $16 million.