Agreement will grant special “trusted traveler” access to the U.S. to an estimated 84 million Mexicans

In a further indication that the “North American Union” agenda is quietly proceeding under what remains of the Security and Prosperity Partnership initiative in the Obama administration, DHS Secretary Janet Napolitano signed, with little fanfare, an agreement in Mexico that would extend special “trusted traveler” access to the U.S. to an estimated 84 million Mexicans.

In September 2006, WND reported that the Department of Transportation, acting through a Security and Prosperity Partnership “working group,” was preparing to issue North American biometric border passes to Mexican, Canadian and U.S. “trusted travelers,” according to documents released to WND under a Freedom of Information Act request.

The Security and Prosperity Partnership, or SPP, was announced by President George W. Bush, together with then-Mexican President Vicente Fox and then-Canadian Prime Minister Paul Martin at a press conference at the end of their trilateral summit meeting in Waco, Texas, March 23, 2005, without any U.S. congressional approval as a treaty or international agreement.

Under the SPP, the U.S., Mexico and Canada organized some 20 different “shadow government” bureaucratic working groups composed of agency heads and undersecretaries in the three nations. The groups spanned a wide range of policy areas, from e-commerce, to aviation policy, to borders and immigration, trilateral travel, transportation, energy, environment, food and agriculture, health and financial services.

WND has frequently reported, beginning in 2006, that the SPP was intended to implement a stealth plan to produce a North American Union composed of the United States, The agreement Napolitano signed with Mexico Nov. 30 appears to bring the SPP working group “trusted traveler” commitment closer to fruition.

The Transportation Security Administration refused to answer a WND inquiry regarding whether trusted traveler cards issued to Mexicans would allow the holder to avoid the new U.S. enhanced screening with full-body backscatter X-ray machines.

As described on the U.S. Customs and Border Protection website, the trusted traveler program allows applicants to receive a biometric border pass to facilitate cross-border travel. The recipient must undergo a thorough background check against criminal, law enforcement, customs, immigration and terrorist files, including biometric fingerprint checks and a personal interview with a CBP officer.

The trusted traveler network is more thoroughly described on the “Global Entry” website maintained by U.S. Customs and Border Patrol.

“Global Entry is a U.S. Customs and Border Protection (CBP) program that allows expedited clearance for pre-approved, low risk travelers upon arrival in the United States,” the CBP website proclaims.

“Though intended for frequent international travelers, there is no minimum number of trips necessary to qualify for the program. Participants may enter the United States by using automated kiosks located at select airports.”

“A key part of the [Nov. 30] agreement is a trusted traveler program that allows airline passengers who have gone through rigorous background checks to bypass lengthy screenings at airport checkpoints,” wrote All Headline News correspondent Tom Ramstack, reporting from Mexico City. “They must also provide biometric information – such as fingerprints – that can be encoded onto trusted traveler cards and run through electronic card readers.” 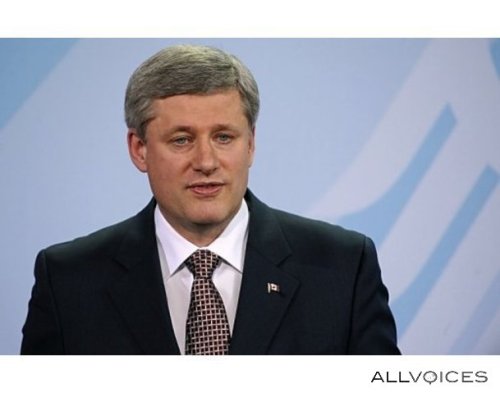 Canadian Conservative Prime Minister Stephen Harper is under fire in parliament for negotiating in secret an agreement with the U.S. on border security. Parliament has not been kept informed.

Canadian Prime Minister Stephen HarperStephen Harper says that he has not yet reached a border security deal with the U.S. However he also said that his government is planning to bolster both security measures and economic access at the border.In the House of Commons Harper can been criticized for negotiating a deal that may have implications for the privacy of Canadians and Canadian sovereignty without any debate in parliament.

The Liberal opposition leader Michael IgnatieffMichael Ignatieff called on Harper to reveal the details of the negotiations Harper has been having with the U.S. government.The Conservatives have engaged in the typical crapola in response to questions from reporters and opposition critics. The government avoids questions and neither confirms nor denies that negotiations are even taking place. This is a certain signal that they are taking place.

Ignatieff said: “With their usual disdain for this chamber and for the public, this government refuses to speak the truth,””Why does this government want to impose a secret agreement on Canadians without debate? What do they have to hide?” Ignatieff certainly posed the relevant complex questions!Harper answered with the appropriate pap:”I can say that it is a priority of this government to work on our relations with the United States to ensure the safety, and in particular, the economic access to the United States.””

Ignatieff pointed out that Harper was evading the questions. But then what are politicians for if not avoiding questions. Ignatieff said that Harper should be forthcoming about the implications of any agreement for immigration policy, charter rights and security. Harper said there was no agreement but that he was always looking for ways to strengthen Canadian security and strengthen the economy. Typically pleasant platitudes with no detail at all.

Actually there have been document leaks. We even know the title of the deal is “Beyond the Border: A Shared Vision for Perimeter Security and Competitiveness”. It is supposedly to be signed by Harper and U.S. president Obama next January. There is yet to be any discussion in the Canadian parliament.

Apparently the agreement will give the U.S. government more influence over Canada’s border security and immigration controls. Canada would also share more information with American law enforcement agencies. Harper is a great admirer of the U.S. especially the conservative movement there.

In return for Canada ceding more influence or control to the U.S. the U.S. would ease up on controls at the Canada-U.S. border, reducing congestion and increasing the flow of two-way trade. One would think that the U.S. would try to do this in any event agreement or not. After all it is U.S. business that are importing and selling the goods or U.S. manufacturers receiving materials.

Jack LaytonJack Layton the NDP (New Democratic Party) leader did not think Harper was telling the full story. I guess not. Harper has not said anything specific at all. Layton thinks that details will only come out when the parliament is not sitting so that the opposition will have no chance to bring the matter up in parliament. Layton said:”I think it’s very important that there be a full debate in Canada about the implications, the pros and cons,”There’s certainly some things that need to be done to improve the flow of goods and people across the border. But I think there’s also a lot of fears regarding the potential threats to our sovereignty. And we’re not getting straight answers from the prime minister, that’s for sure.”

Gilles DuceppeGilles Duceppe leader of the Bloc Quebecois the third opposition party said that he thinks that the agreement could very well be broad in scope resembling a treaty. That being the case the deal should be subjected to a binding vote in parliament. Don’t expect the Conservative government to buy that line. Harper will use his skills to avoid discussion and present the public with a fait accompli.