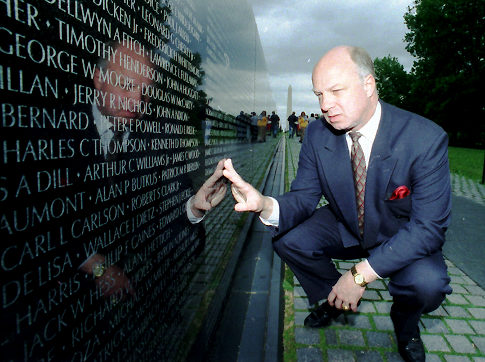 In this 1994 photo, Wheeler touches the name of a friend engraved in the Vietnam Veterans Memorial in Washington. Tasnadi/AP

The mystery of the murdered former Pentagon official found in a Delaware landfill on New Year’s Eve deepened on Tuesday as cops zeroed in on his final movements – but failed to locate a crime scene.

John Parsons Wheeler, 66, best known for helping to get the Vietnam Veterans Memorial built in Washington, was last seen publicly the day before his body tumbled into a Wilmington landfill on Friday.

A passerby spotted Wheeler, who lived six miles away in New Castle, Del., at 3:30 p.m. Thursday in downtown Wilmington.

Sometime after that, his body was put into a commercial Dumpster in Newark, Del. – about 12 miles from his home and 15 miles from Wilmington. It fell into the landfill from a truck that picked up trash in Newark on Friday morning.

Police won’t say how he died.

* In Harlem, cops – with Wheeler’s distraught wife, Katherine Klyce, in tow – searched their W. 124th St. condo Monday night but left empty-handed, according to staff at the luxury building. Klyce, who runs a Cambodian textile business from the ninth-floor apartment, was traveling when her husband went missing.

This is the second time Klyce has been hit by a high-profile murder mystery. Her sister, Emily Klyce Fisher, a wealthy society woman in Memphis, was stabbed 50 times in her home in 1995. The killing was unsolved until 2003, when a TV show led to a friend of Fisher’s druggie son.

* At Klyce and Wheeler’s New Castle home, reporters saw kitchen floorboards pried up while cops were searching. It wasn’t clear who pried them up – or why.

Cops said the house was not the murder scene. “We don’t have a crime scene,” said Newark Police Lt. Mark Farrall.

* Neighbor Ron Roark told The (Wilmington) News Journal that for four days over Christmas, he heard a TV blaring night and day inside Wheeler’s house, even though no one seemed to be home.

“It was so loud, we could hear it through the walls, and we found that strange,” Roark told the newspaper.

* Wheeler had an ongoing lawsuit against another neighbor, Frank Marini, who is building a home that would block Wheeler’s view.

On Tuesday, Dec. 28, a smoke bomb was thrown into the Marinis’ unfinished house. Cops say they don’t know if it is connected to Wheeler’s murder.

Wheeler, a defense contractor, was special assistant to the secretary of the Air Force from 2005 to 2008.