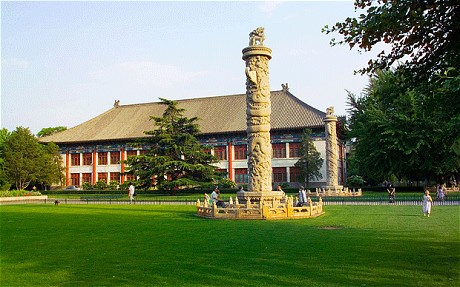 China’s most prestigious seat of learning, Peking University in Beijing, is planning to screen students for ‘radical thoughts’ in a further sign that China’s authorities are becoming increasingly fearful of dissent.

Students at the university – China’s equivalent of Oxford or Cambridge – reacted furiously to the news, saying the policy evoked memories of the Cultural Revolution (1966-76) when students and professors were persecuted for being politically unreliable.

University authorities said the screening for “radical thoughts”, which will begin in May, was just one element in a ten-point checklist to help students suffering from a range of problems including “psychological fragility, poverty and internet addiction”.

“Some would even criticise the school after canteen food prices rose 20 cents,” he explained.

However students and academics heaped scorn the plans, accusing the authorities of petty-mindedness and trying to curb the supposedly freethinking ethos on which the university was founded in 1898 as part of China’s attempt to modernise.

Yu Jianrong, of the Chinese Academy of Social Sciences and one of China’s leading social commentators, was openly scathing of the campaign.

“I don’t know how Peking University defines ‘radical minded’,” he wrote on his microblog, adding with heavy sarcasm, “May I request that the university [Communist] Party committee publicise the standards so that all colleges around the nation can learn from it.”

Zhang Ming, a politics professor at Beijing’s Renmin University, was even more direct.

“It is going too far for a respected university to openly control radical minds,” he told the South China Morning Post.

“Aren’t we going back to the days of the Cultural Revolution? This is hateful and terrible.”

Peking University has always been a centre of liberal thought in China, spawning the anti-imperialist May 4th movement of 1919 and the Tiananmen Square protests of 1989 that still haunts the Chinese leadership.

Following a wave of grass-roots revolutions in the Middle East, China’s leaders have shown increasing signs of nervousness, suppressing any threat of a “Jasmine-style” revolution by pressuring lawyers, journalists and academic institutions to “maintain stability”.

In a speech to senior Party leaders last month, China’s president, Hu Jintao, called for a stepping up of “innovative social governance methods”, exhorting officials to seek to try and control online debates and shape “healthy opinions” among the public.

However of more than 2,000 online users who expressed their opinions on one of China’s popular web portals about “radical thoughts” screening at Peking University, the vast majority were indignant.

“How can Peking University, such a prestigious university, be so shameless?”, asked one, while another warned that such schemes would lead to the crushing of the innovation and freethinking that gave Peking University its reputation.

“This will kill freedom of thinking. It will be the darkest moment in Beida [Peking University] history and totally undermine the concept of education.”