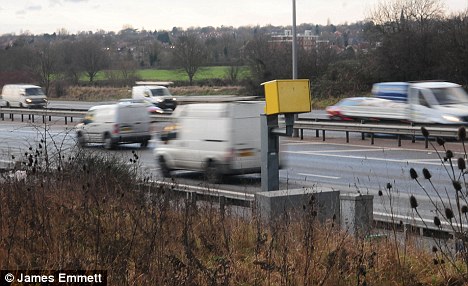 Britain’s most lucrative speed cameras will be named for the first time, under a new transparency drive launched by ministers today.

Motorists will be given access to previously hidden statistics showing the number of speeding prosecutions and accidents at camera sites.

The information will enable drivers to build up a ‘league table’ of Britain’s busiest speed cameras as well as judging their effectiveness in saving lives.

Up until now, authorities have been reluctant to publish admit which cameras were the biggest money spinners, with details having to be prised out of them using Freedom of Information laws.

There has been mounting criticism that the cameras – also known as gatsos – are being used to raise revenue rather than save lives.

One camera at the southern end of the M11 in Essex, which raises over £1million-a-year in fines, has been found to have increased the numbers of crashes and injuries at its site.

Accidents have doubled since the machine was installed on the M11 at its junction with the North Circular A406 near Woodford, Essex.

Police said crashes happened because motorists slowed down ahead of the camera and then speeded up once they were clear of it.

Another traffic camera at a yellow box junction on Battersea Bridge Road in South London has been dubbed ‘money box’ after fining 2,000 drivers a month – raising over £1million a year.

Critics have pointed out that bad congestion caused by engineering works meant that many unsuspecting drivers found themselves trapped in the box.

Anyone who stopped in the box for longer than five seconds was issued with a fine of £60 – which could double if not paid immediately.

Now, however, local authorities will have to publish the numbers of accidents and casualties at camera sites – both before and after they were installed – within weeks.

Mr Penning said: ‘We want to stop motorists being used as cash cows. For too long information about speed cameras has been hidden in the shadows.

‘This new data will end that by clearly showing whether a camera is saving lives or just making money.’

The information on collisions and casualties which local authorities will have to provide will date back to 1990.

The number of cameras on Britain’s road started to mushroom in the early 1990s. By 2010, they were understood to have generated more than £100million in fines.

Research has suggested that speed cameras have triggered at least 28,000 crashes since 2001.

The devices are found to have caused motorists to drive erratically, to not concentrate on the road and to brake suddenly when one comes into sight.

More than 80 per cent of drivers say they look at their speedometers rather than the cars in front when they approach a speed camera.

The new information will add to already-growing pressure for many cameras to be scrapped.

Although minister fear the move could lead to a wave of vandalism targeting the motorist’s nemesis.

Mr Penning said: ‘This will expose where cameras are and are not doing their job. It is all about empowerment. We can only do what we do with road safety if people believe it isn’t just about raising money but is about saving lives.

‘What this will show is where there weren’t any accidents before, and accidents afterwards are minimal, or may even have gone up because people have reacted differently. But it will also expose where accidents have dropped.

‘The police are concerned that certain cameras may be vandalised more than they are now, but that’s not a reason not to do it.’

‘Speed is to blame for only 4.7 per cent of accidents.’

It’s true that Mendez’s arrest probably dealt the final, fatal blow to La Familia, which once controlled most of the drug trade in Mexico’s Michoacan state.

But it’s also true that La Familia’s power has dwindled dramatically since the December 2010 death of its founder, the quasi-messianic Nazario “El Mas Loco” Moreno (he wrote his own Bible that La Familia members are required to follow).

Mendez’s capture likely won’t have any effect on reducing the drug violence in Michoacan. The fact that he was arrested at a police checkpoint indicates that Mendez probably wasn’t that hard to nab in the first place.

Mendez and the remaining La Familia members have been under attack by a new gang of narco-evangelicals calling themselves the Knights Templar, who are led by La Familia’s former operational chief Servando “La Tuta” Gomez. The rival factions are now vying for control of La Familia’s lucrative meth business.

The Knights subscribe to La Familia’s ruthless brand of narco-Christianity — Gomez and the late Moreno converted to Evangelical Christianity while working as migrants in the U.S. and have referred to their be- headings and assassinations as “divine justice.”  The Knights have already gained a reputation for extreme brutality – the gang displayed at least 9 bodies last week with warnings that they would take down any allies of La Familia or Los Zetas, another powerful Mexican cartel.

The WSJ notes today that the inconsequence of Mendez’ arrest once again calls into question Mexico’s drug war strategy targeting cartel leaders. The country has caught or killed 21 of the 37 most-wanted cartel bosses since 2009, but the leadership vacuum seems to spawn increasingly brutal cartel factions.

Cartel expert David Shirk compares it to the ‘Sorcerer’s Apprentice’ – every time you break a broom, the problem just gets worse.

Operation “Poppins”: Police breaking into homes and businesses to “raise awareness” about burglary

Help! The police have broken in

POLICE have sparked outrage after it emerged that they have been breaking into homes and businesses in a bid to highlight the dangers of burglary.

Officers have been climbing through open windows and leaving calling cards to alert residents to the threat of leaving their property insecure.

One lone woman was shocked when a uniformed officer walked into her front room while she was watching TV. Civil liberties campaigners last night demanded an end to the scheme, calling it an invasion of privacy.

Daniel Hamilton, of the Big Brother Watch campaign group, said: “This case is symptomatic of the rapid growth of the nanny state. For police officers to be entering people’s homes without invitation is at best hugely ­invasive and, at worse, legally dubious. Trespassing on private property, regardless of any good intention you may have, is a crime.

Home owners should be responsible for ensuring the security of their property, not busy-body police officers.”

PC Adam Owers defended the scheme. “It is all about raising people’s awareness,” he said.

“People don’t realise how quickly a burglary can take place. Burglars are creatures of habit, they are opportunist.” 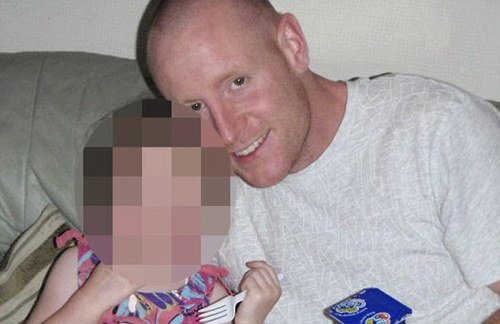 Neil Flanagan has been arrested on suspicion of murder Photo: CAVENDISH PRESS

Three members of a family were arrested yesterday on suspicion of stabbing to death a balaclava-clad intruder who had burst into their home in the dead of night.

The arrests of Neil Flanagan, 59, his son, Peter, 27, and Peter’s girlfriend, came a week after the Prime Minister, David Cameron, promised to protect the rights of householders trying to safeguard their homes. Peter Flanagan and his girlfriend were released without charge.

All three had been taken to a police station in Salford, Greater Manchester, for questioning by detectives.

The trio were arrested shortly after police found a 26-year-old man bleeding to death in a street 300 yards from their home.

Greater Manchester Police later described the incident as “a tragic set of circumstances” and said they were trying to unravel precisely what happened in and around the Flanigans’ terraced house.

Chief Supt Kevin Mulligan confirmed that police had been called about an ongoing robbery at the property shortly before midnight.

Officers arriving at the scene were told that four men in dark clothing, some in balaclavas, had broken in via the back door before being repelled. It is not known whether they were armed.

A search of the area was quickly launched and within minutes police found the dying man lying on a pavement in Hospital Road, Salford.

At least two of his accomplices in the burglary fled as officers approached.

Their associate, who has not been formally identified, was taken to hospital but was confirmed as being dead on arrival.

He had suffered “at least one stab wound”. A post mortem will determine the full extent of his injuries.

Mr Mulligan told a press conference: “It was a tragic set of circumstances. A man has lost his life in a shocking incident”.

He went on: “We believe the man who died was one of those trying to get into the address. But clearly it is a confusing picture at this stage and we have embarked upon a very complex inquiry.

“We don’t want to speculate on what exactly has taken place”.

The telephone call reporting the robbery is understood to have been made by the Flanagans. However, officers have yet to determine what, if anything, was taken from their home.

Last night detectives were still unable to confirm whether the Flanagans either knew the intruders or recognised any of them.

A pivotal element of the investigation is to determine whether the dead man was stabbed inside the house or as he fled.

The issue of home protection has been at the forefront of political debate in recent years.

In January 2010 Mr Cameron said: “The moment a burglar steps over your threshold and invades your property, with all the threat that gives to you, your family and your livelihood, I think they leave their human rights outside.”

Last week he returned to the topic, saying: “We will put beyond doubt that home owners and small shopkeepers who use reasonable force to defend themselves or their properties will not be prosecuted”.

As police continued their investigation into the Salford stabbing, Mr Mulligan sought to distance himself from the political debate it is likely to fuel.

“We are investigating this matter within the legal position as it stands at the moment,” he said.

Asked what advice he would give local householders, he replied: “I would tell them to ring the police and to use reasonable force to protect themselves within the legal framework.

“I don’t want to be drawn into a detailed debate about the law. That is not my job”.