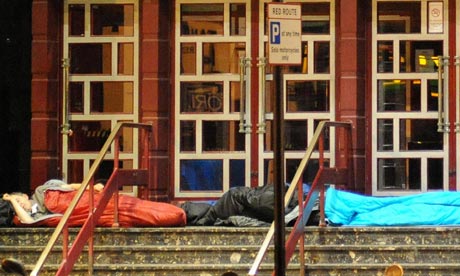 Homeless men on the steps of a theatre in London, which is among cities in which criminal gangs have targeted people sleeping rough for forced labour. Photograph: Ian Nicholson/PA

Rough sleepers are being turned into “modern-day slaves” by criminal gangs operating across the country, according to one of the UK’s leading charities helping people living on the streets.

by Jamie Doward and Alex Binley

Thames Reach says it is aware of reports that gangs are targeting homeless people in London, Birmingham, Manchester, Southampton, Dover, Leicester and Luton.

The revelation comes after a raid on a travellers’ site in Bedfordshire by police last weekend that led to the arrest of four men and a woman on suspicion of slavery offences. Police said the alleged “slaves” were mostly English, but some were of eastern European origin. Detectives said they were all vulnerable and were either homeless people or alcoholics who had been recruited by “gangmasters” offering money.

But according to Thames Reach this was not an isolated incident. The charity said it has been contacted by 22 central and eastern European rough sleepers who had run away from gangs this year. It said some were fearful for their lives.

“We have been coming across some extremely disturbing reports from homeless people who have been ‘enslaved’ by criminal gangs across the UK,” said Mike Nicholas, a spokesman for the charity. “Increasing numbers of rough sleepers, many from central and eastern Europe, have told us how they have been held against their will, beaten and forced to work without wages before escaping and ending up on the streets of London.”

Earlier this year Thames Reach staff found a group of six rough sleepers linked to a slavery ring operating out of London’s King’s Cross that sparked a police investigation. The charity said the men had come from the Czech Republic and were being exploited by a Czech family based in Birmingham.

One of the men, “Michal”, told the charity he had been lured to the UK on false promises of paid work. He claimed that before flying he was drugged with what he now suspects was a sedative, which the gang claimed was a painkiller to help with his bad back.

He was then driven to a house in Birmingham where he lived alongside nine other victims of the four-strong gang who were taken each day by minibus to work at a bakery in Luton.

Michal told Thames Reach staff that he worked as a “slave” and all his money was taken from him by the gang who beat him regularly. He claims he was given poor food such as bread and butter once a day and that the gang stole his ID and opened a credit card in his name.

Another man from the Czech Republic, Wojtek, told Thames Reach he was living on the streets of London, relying on handouts, when he was approached at a soup run near Victoria with the offer of a job and accommodation.

He was given a coach ticket to Leicester where he claims a gang stole his ID and bank and credit card accounts. He was told that if he tried to escape he would be caught and beaten.

Thames Reach has helped over 1,000 central and eastern European people return home since early 2009. It says another 1,000 were counted on the streets last year. It says some of those who returned were victims of violent assaults by gang leaders.

“We need to alert homeless services and the people using them to the threat,” Nicholas said. “The embassies and police also need to take the issue more seriously, ensuring the victims get assistance and that this recently exposed menace is tackled. Life as a rough sleeper can be extremely dangerous but the sheer criminality and brutal nature of these gangs has taken the threat of living on the streets to a new level.”