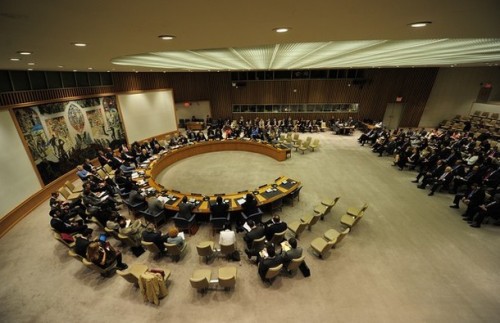 Members of the UN Security Council, presided by Lebanese Prime Minister Najib Mikati, meet on ‘The situation in the Middle East at the United Nations headquarters in New York

The resolution calls on all countries to contribute personnel, equipment and other resources to the International Security Assistance Force.

UNITED NATIONS — The U.N. Security Council voted unanimously Wednesday to authorize the 130,000-strong NATO-led force in Afghanistan for another year, expressing serious concern over ongoing terrorist and criminal activities in the country and the increase in civilian casualties.

The resolution adopted by the U.N.’s most powerful body calls for increased training of the Afghan army and police to accelerate progress toward their self-sufficiency and meet the target of gradually transferring security responsibility from the coalition force to the Afghan government by the end of 2014.

The resolution calls on all countries to contribute personnel, equipment and other resources to the International Security Assistance Force, known as ISAF, and continue efforts to support security and stability in Afghanistan.

Declaring that the situation in Afghanistan “still constitutes a threat to international peace and security,” the council extended ISAF’s mandate until Oct. 13, 2012.

Earlier this month, U.S. Defense Secretary Leon Panetta reiterated complaints that many NATO nations have failed to provide needed trainers and money to the war in Afghanistan. While the war is being run under NATO’s flag, the U.S. has carried the bulk of the load, deploying nearly 100,000 troops there during the difficult years of the surge in order to tamp down Taliban violence.

The Security Council stressed “the interconnected nature of the challenges in Afghanistan” — ensuring security, good governance, human rights, rule of law, accountability and development while fighting the narcotics trade and corruption.

It expressed “serious concern about the security situation in Afghanistan, in particular the ongoing violent and terrorist activities by the Taliban, al-Qaida, other illegal armed groups and criminals, including those involved in the narcotics trade … and the strong links between terrorism activities and illicit drugs, resulting in threats to the local population.”

The council strongly condemned attacks against humanitarian workers, and Afghan and international forces, singling out the use of civilians as human shields by the Taliban and al-Qaida.

It also condemned recent terrorist attacks on the Inter-Continental Hotel, British Council, ISAF headquarters and the U.S. Embassy in the Afghan capital, Kabul, as well as the assassination of former Afghan president Burhannuddin Rabbani, who was appointed by the government to try to broker peace with the Taliban.

The Security Council reiterated “its firm commitment to support the government … in its efforts to advance the peace and reconciliation process,” noting that an increasing number of Taliban have rejected al-Qaida, reconciled with the government, and now support a peaceful resolution of the conflict.