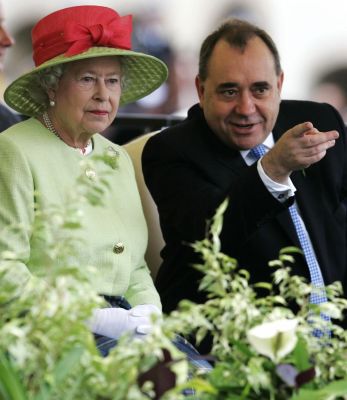 Photo credit: AP | FILE – A Saturday, June 30, 2007 photo from files showing Britain’s Queen Elizabeth II with Scotland’s First Minister Alex Salmond as they view the riding procession during the ceremonial opening of the Scottish Parliament in Edinburgh. Britain’s government said Tuesday Jan. 10, 2012, it will give Scotland the power to hold a binding vote that would give it independence from Britain, turning back centuries of history. Scotland’s ruling Scottish National Party, which has long advocated independence, had pledged to hold a referendum before 2016. Under law, only Britain’s Parliament can order a binding vote _ meaning it must temporarily offer the power to Scotland’s semiautonomous administration. (AP Photo/Andrew Milligan, Pool)

LONDON – (AP) — Breaking up is supposed to be hard to do — but Britain’s government confirmed Tuesday it would happily offer Scotland the powers it needs to sever centuries-old ties to England.

Prime Minister David Cameron’s government said it would sweep away legal hurdles to allow the Scots a vote on whether their country should become independent for the first time since the 18th Century Act of Union, which united Scotland with England to create Great Britain.

But in return, Cameron — who opposes any breakup of the United Kingdom, which also includes Wales and Northern Ireland — is urging Scotland to make its intentions clear “sooner rather than later.” He claims investors are becoming increasingly wary of Scottish leader Alex Salmond’s plans to delay a vote for several years, damaging Britain’s economy.

His separatist Scottish National Party insists that winning autonomy over tax and spending policies — powers the Scottish government doesn’t presently have — would help replicate the economic success of neighbors like Norway, which has used its energy riches to fund state pensions.

“This is a huge decision for Scotland. This is potentially the biggest decision we have made as a nation for 300 years,” Salmond said Tuesday, on a tour of an oil facility in Dyce, eastern Scotland.

He insisted that Cameron should not take any role in setting out the timetable for the crucial referendum.

“We are not going to be stampeded and dragooned by a Tory prime minister in London,” Salmond said.

Since Scotland voted in favor of a domestic legislative body in 1997, its parliament has had autonomy over education, health and justice and can make minor alterations to income tax. For now, London retains primacy on all matters relating to Britain as a whole — including defense, energy and foreign relations.

The other nations of the U.K. also have administrations with some limited powers. Wales voted for a national assembly in 1997, while the Northern Ireland Assembly was created to provide cross-community government in the province under the U.S.-brokered Good Friday peace accord of 1998.

Salmond accuses Cameron of pushing for an early vote in Scotland in the hope of killing off any split in the United Kingdom. Both Cameron and Britain’s opposition leader, the Labour Party’s Ed Miliband, plan to campaign against Scottish independence.

The timing of the vote could be crucial. Recent opinion polls indicate rising support for independence, after surveys showed backing for the separation hovering at about 30 percent for several decades.

The Scottish Government said autumn 2014 was its preferred date for a vote on the country’s constitutional future, with Salmond saying the timeframe is desirable because “this is the biggest decision Scotland has made for 300 years.”

“If you are going to do things properly, allow the proper process to take place … then that is the date we are going to move towards,” Salmond said.

There had been speculation the poll would be held in 2014, when nationalist sentiment could be at a high as the city of Glasgow hosts the Commonwealth Games and Scots mark the 700th anniversary of the battle of Bannockburn, a key military victory over England.

Scottish Secretary Michael Moore said that under current law, Scotland’s Parliament could not hold its own legally binding referendum, meaning any attempt to enforce the result would be illegal. He said Britain’s government would temporarily grant Scotland’s administration the rights to hold a binding poll.

“This government believes passionately in the United Kingdom,” Moore told the House of Commons. “For over 300 years our country has brought people together in the most successful multinational state the world has known.”

Danny Alexander, Britain’s deputy treasury chief and a lawmaker who represents a Scottish district at Westminster, said the decision would help “avoid years of legal wrangling” and speed Scotland’s path to a decision.

“I think that jobs, investment and growth in Scotland are much more important than waiting for the anniversary of a medieval battle as the key that determines your timing for a referendum,” Alexander said.

Cameron has suggested Scotland’s vote should only put forward two choices — independence, or the status quo, dismissing calls for a third option, under which Scotland would have control over all but foreign policy and defense.

Salmond hasn’t ruled out including the lesser option, referred to as “independence-lite,” but said his own party would campaign in favor of a permanent split.

“What I think the Scottish people deserve is a fair, clear and decisive question,” Cameron said.

Salmond’s party has said that if it succeeds in winning independence, Scotland would keep Queen Elizabeth II as head of state and — for now at least — retain the British pound as its currency. 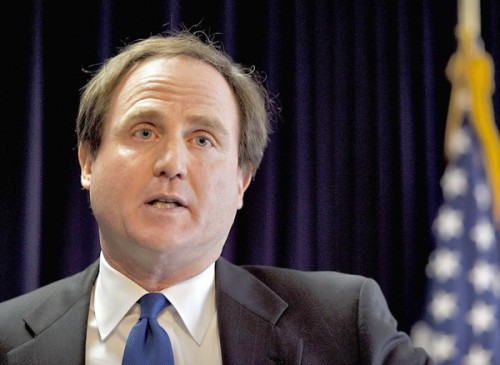 Members of Congress want to see whether White Gun, like Fast and Furious, lost track of firearms that ended up with Mexican criminals.

By Richard A. Serrano

Hope A. MacAllister wanted access to police and military vaults for American weapons recovered by Mexican authorities in raids and at crime scenes. She especially was interested in firearms from another ATF investigation, code-named White Gun, that she was running.

Now members of Congress who have spent months scrutinizing the Fast and Furious debacle are seeking to determine whether White Gun was another weapons investigation gone wrong.

“Apparently guns got away again,” said one source close to the investigation, led by Rep. Darrell Issa (R-Vista) and Sen. Charles E. Grassley (R-Iowa). “How many got into Mexico, who knows?”

Officials from the Bureau of Alcohol, Tobacco, Firearms and Explosives declined to comment on whether any firearms were lost in White Gun. But unlike Fast and Furious, they vigorously defended the previously unreported White Gun operation as a well-managed investigation that produced three arrests and convictions.

The three men “were looking to acquire military-grade weapons for a drug cartel,” said an ATF official, who asked for anonymity because the case involves an undercover operation. “This was a classic example of bad guys showing up at a location to get the weapons they desire but getting arrested by law enforcement instead.”

In Fast and Furious, more than 1,700 firearms were lost after agents allowed illegal gun purchases in U.S. gun shops in hopes of tracking the weapons into Mexico. In White Gun, the ATF ran a traditional sting operation with undercover agents and confidential informants trying to snare suspects working for the Sinaloa drug cartel.

According to internal ATF documents, including debriefing summaries and border task force overviews, White Gun and Fast and Furious both began in fall 2009, and the same ATF officials ran both cases.

MacAllister was the lead agent. Her supervisor, David J. Voth, was head of the ATF’s Group VII field office in Phoenix. His boss was William D. Newell, then the special agent in charge in Phoenix.

According to documents that the ATF sent to the Organized Crime Drug Enforcement Task Forces, an umbrella group of U.S. agencies that seeks to disrupt major drug trafficking and money laundering, White Gun targeted nine leaders of the Sinaloa cartel. The list included Joaquin “Chapo” Guzman, who heads the cartel and is Mexico’s most wanted drug suspect.

Fast and Furious: Mystery of the White Guns

The agents focused first on Vicente Fernando Guzman Patino, a cartel insider who was identified as one of their weapons purchasers and who often used code words and phrases, saying “57” for “OK,” for instance.

In fall 2009, the ATF team sent an undercover agent posing as an arms dealer to Guzman Patino. Photos of weapons, including a Dragon Fire 120-millimeter heavy mortar, were emailed to his “Superman6950” Hotmail account.

According to the ATF documents, Guzman Patino told the undercover agent that “if he would bring them a tank, they would buy it.” He boasted he had “$15 million to spend on firearms and not to worry about the money.” He wanted “the biggest and most extravagant firearms available.”

The two met again outside a Phoenix restaurant, and the undercover agent showed Guzman Patino five weapons in the trunk of his vehicle, including a Bushmaster rifle and a Ramo .50 heavy machine gun. The undercover agent said he could get that kind of firepower for the Sinaloans.

Just as Guzman Patino seemed ready to buy, according to the ATF records, the investigation into his activities abruptly ended. The documents do not explain why, and they don’t indicate whether he obtained any weapons.

A second case involved cartel members who were seeking shoulder-launched antiaircraft missiles and antitank rockets, according to the ATF records.

The same undercover agent met the pair in February 2010 at a Phoenix warehouse. David Diaz-Sosa and Jorge DeJesus-Casteneda brought 11 pounds of crystal methamphetamine to trade for weapons. The undercover agent showed them shoulder-launched missiles, rocket launchers and grenades before ATF agents moved in and arrested them.

None of the three was included on the list of nine cartel leaders who were targeted in the operation.

The U.S. attorney in Phoenix at the time, Dennis K. Burke, who later resigned over Fast and Furious, called the White Gun convictions “a tremendous team effort that put a stop to a well-financed criminal conspiracy to acquire massive destructive firepower.”

By that summer, MacAllister had gone to Mexico City to check the police and military vaults. The ATF documents don’t detail what she found, but they note she discovered “weapons in military custody related to her current investigations.”