TSA admits “mistakes were made” after strip searching elderly women

New York state Senator Michael Gianaris wrote to the TSA on their behalf, urging an investigation.

In response, TSA Assistant Secretary Betsy Markey wrote to Gianaris and said an investigation showed TSA employees had put a back brace worn by Zimmerman through an X-ray machine.

“It is not standard procedure for TSOs to screen back braces through the X-ray, and TSA apologizes for this employee’s action,” said the letter, which Gianaris shared with Reuters on Wednesday.

TSA agents visually inspected a colostomy bag worn by Zimmerman, the letter said, which also is not standard operating procedure.

At no point was either passenger asked to remove any clothing, the TSA said.

“TSA sincerely regrets any discomfort or inconveniences the passengers at JFK experienced,” the letter said.

Agents at JFK would receive refresher training “on how to respectfully and safely screen passengers with disabilities or medical conditions to ensure all proper procedures are followed,” Markey said in the letter.

Big Brother is joining the battle of the bulge. 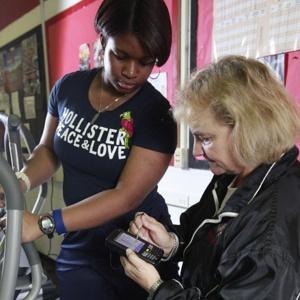 A group of Long Island students will soon be wearing controversial electronic monitors that allow school officials to track their physical activity around the clock.

The athletics chair for the Bay Shore schools ordered 10 Polar Active monitors, at $90 a pop, for use starting this spring. The wristwatchlike devices count heartbeats, detect motion and even track students’ sleeping habits in a bid to combat obesity.

The information is displayed on a color-coded screen and gets transmitted to a password-protected Web site that students and educators can access.

The devices are already in use in school districts in St. Louis and South Orange, NJ — and have raised privacy concerns among some parents and observers.

But Ted Nagengast, the Bay Shore athletics chair, said, “It’s a great reinforcement in fighting the obesity epidemic. It tells kids, in real time, ‘Am I active? Am I not active?’ We want to give kids the opportunity to become active.”

The monitors are distributed by Polar Electro, of Lake Success, LI, the US division of a Finland firm.

In the South Orange-Maplewood School District, where earlier versions of the devices have been used for two years, upper-grade students’ marks in phys ed are based in part on heart-rate monitors and activity sensors.

Teachers use hand-held computers to collect data from each student’s wrist monitor during class, then upload the information to the school computer system for storage and long-term tracking.

But privacy advocates and parents worry that schools are using electronic monitors in phys ed without families’ knowledge or consent.

“I didn’t even know it was going on, and I’m active in the school,” said Beth Huebner, of St. Louis.

Her son, a fourth-grader, wore a Polar Active monitor in class without her OK last fall at Ross Elementary School.

“We have gotten no information about the Web-site security or where the data will go,” Huebner said.

“When you get into monitoring people’s biological vital signs, that’s a pretty intrusive measurement,” said Jay Stanley, of the American Civil Liberties Union. “There are key privacy interests at play.”

At the very least, says Stanley, parents must have a say in how long the data will be stored and who will have access to it and schools must obtain parents’ consent.

“A program like this should only be voluntary. Nobody should be forced to reveal biological indicators,” he said.

“It’s all about secondary use,” said Virginia Rezmierski, an expert on information technology and privacy at the University of Michigan.

“Does the data pass along with the child from school to school? When will insurance companies want to get access to it? Will a school want to medicate a child that the monitor identifies as hyperactive? It’s potentially very dangerous ground.”