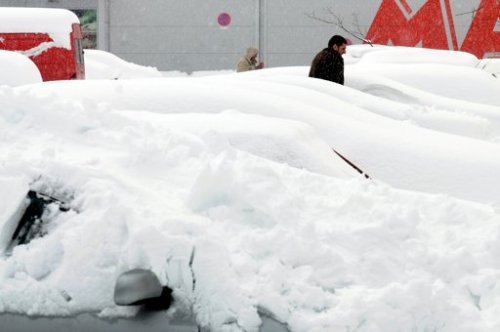 A man walks between cars covered with snow in Podgorica. (AFP Photo/Savo Prelevic)

Snow drifts reaching up to rooftops kept tens of thousands of villagers prisoners in their own homes Saturday as the death toll from Europe’s big freeze rose past 550.

More heavy snow fell on the Balkans and in Italy, while the Danube river, already closed to shipping for hundreds of kilometres (miles) because of thick ice, froze over in Bulgaria for the first time in 27 years.

Montenegro’s capital of Podgorica was brought to a standstill by snow 50 centimetres (20 inches) deep, a 50-year record, closing the city’s airport and halting rail services to Serbia because of an avalanche.

Eight more people were reported to have died in Romania, taking the toll for the country to 65, three in Serbia, one in the Czech Republic and one in Austria.

Polish fire brigade spokesman Pawel Fratcak said Saturday that defective heating had triggered a spate of deadly blazes in houses and apartments, with eight people killed on Friday night and three the night before.

New Romanian Prime Minister Mihai Razvan Ungureanu and his defence and interior ministers, who were sworn in only on Thursday, flew by helicopter to the eastern Buzau region, one of the worst hit, on Saturday.

He called on the authorities to work hard to beat the challenges facing them, as food threatened to run out in some villages in spite of air drops.

At Carligul Mic firemen and volunteers helped people dig tunnels and trenches in the snow reaching to the house roofs in some places.

Authorities said an estimated 30,000 people were still cut off in Romania, and more than 110,000 in the Balkan countries, including 60,000 in Montenegro, nearly 10 percent of the population.

Belgrade has taken steps to limit electricity consumption in the face of threatened shortages, calling on companies to reduce their activities to a minimum.

With Wednesday and Thursday already public holidays for Serbia’s national day, the government has also declared Friday a non-working day to extend into next weekend.

In neighbouring Kosovo, an avalanche killed at least people in a southern mountain village and left nine others trapped in several houses under 10 metres of snow.

A helicopter from the NATO-led peacekeeping force was dispatched to help with the rescue effort but could not land due to thick fog.

Forecasters expect the cold snap, which started two weeks ago, to continue until mid-February.

In Italy Rome was again blanketed by snow for the second time in a week, but authorities seemed to have learned from their previous experience, when the capital was brought to a halt.

Public transport functioned almost normally, thanks to 700 snowploughs and gritters mobilised, but other parts of the country, especially the south where snow is extremely rare, were having difficulties.

In the Calabria region, Campana’s mayor Pasquale Manfredi, where many villages were cut off, likened the weather to “an earthquake without the shaking.”

Meteorologists in Belgium said the country had recorded its longest cold snap in 70 years, with temperatures in Brussels’ suburbs remaining below zero for 13 consecutive days.

On the French Mediterranean island of Corsica snow was up to one metre thick in the higher villages and all flights were cancelled from Bastia airport.

Many people are determined to enjoy the icy conditions to their utmost, however.

Thousands have taken to frozen lakes and rivers, including the Aussenalster lake at Hamburg in northern Germany, iced over for the first time in 15 years, which is mounting a huge festival expected to attract one million people over the weekend.

In Poland ice yachting or ice-surfing, on a surfboard equipped with skates, are the rage, while in the Czech Republic tourists have flocked to the village of Kvilda, reckoned to be one of the coldest in the country, for the experience of camping out in temperatures of up to minus 39 Celsius (minus 38 Fahrenheit).

As some Swiss regions recorded temperatures of minus 23 Celsius (minus 10 Fahrenheit), the tourism board said the ice cover on Fribourg’s Black Lake was thick enough to plan for aircrafts to land on it in the coming days.