Pentagon admits it dumped 9/11 victims’ remains in a landfill 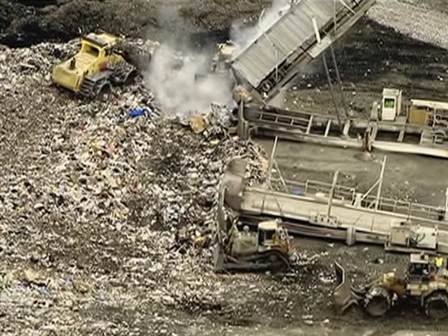 The disclosure that unidentified remains from the 9/11 attack were buried in a landfill was a small part of a larger report on problems at the military’s mortuary at Dover, Del. NBC’s Jim Miklaszewski reports.

For the first time, the Defense Department acknowledged Tuesday that some cremated remains of victims of the Sept. 11, 2001, terrorist attacks were dumped in a landfill.

The disclosure is just two paragraphs in an 86-page report released Tuesday by an independent task force reviewing operations at the military’s mortuary at Dover, Del.

In a contentious briefing for reporters at the Pentagon, retired Army Gen. John Abizaid, the head of the panel, tried to keep the focus on steps the military was taking going forward, saying the 9/11 findings were only a minor part of the task force’s work.

Asked repeatedly for more information, he said, “We did not spend a great deal of time and effort and energy” on the matter, adding forcefully: “It’s my report, but it’s not the focus of the report.”

Defense Secretary Leon Panetta formed the task force in December after an investigation by the Air Force, which runs the facility, found that some remains of U.S. military personnel weren’t handled “in accordance with procedures.”

The Air Force acknowledged that it had disposed of the incinerated remains of at least 274 service members in the landfill before it ended the practice in 2008. At the time, officials said records went back only to 2003.

But the independent panel found that the practice went back at least to 2001, and it discovered that “several portions of remains” recovered from the 9/11 attacks at the Pentagon and at Shanksville, Pa., also ended up in a landfill:

These cremated portions were then placed in sealed containers that were provided to a biomedical waste disposal contractor. Per the biomedical waste contract at that time, the contractor then transported these containers and incinerated them. The assumption on the part of [Dover] was that after final incineration nothing remained. A [Dover] management query found that there was some residual material following incineration and that the contractor was disposing of it in a landfill. The landfill disposition was not disclosed in the contractual disposal agreement.

Air Force Secretary Michael Donley and the Air Force chief of staff, Gen. Norton Schwartz, said they hadn’t yet had a chance to review the entire report.

“This is new information to me,” Donley acknowledged when asked about the 9/11 victims by NBC News Pentagon correspondent Jim Miklaszewski. Schwartz, asked the same question, replied, “That’s what I’m saying.”

Rep. Rush Holt, D-N.J., who has sought answers to what happened at Dover since last year, said the report bore out what he believed all along.

“I suspected, as Gen. Abizaid’s panel has now confirmed, that these practices had been going on for many years. Even remains from the 9/11 terrorist attacks were treated in this way,” Holt said in a statement to msnbc.com.

“The Department of Defense needs to engage in some real soul-searching,” Holt said. “How is it possible that, for years or even decades, no one at Dover recognized how profoundly inappropriate these practices were?”

‘Commanders in name only’

Abizaid told reporters that the Air Force’s complex command structure led to the problems by creating “commanders in name only.”

But “this was not just an Air Force problem,” he said, adding that the entire U.S. military “needs to understand this is a 100 percent no-fail mission.”

For one thing, he said, the Dover facility should no longer cremate fallen troops, because “we think it’s a bad idea for DoD to be in the cremation business” in the first place.

The Dover facility is the first point of entry for U.S. service members who are killed or die overseas. It first came under investigation in 2010 after employees complained about how some cases were handled.

Investigators said last year that they had found no evidence that anyone intentionally mishandled the remains, but they concluded that the mortuary staff failed to “maintain accountability” with some remains.

“The standard is 100 percent accountability in every instance of this important mission,” Schwartz said at the time.

“We can, and will, do better, and as a result of the allegations and investigation, our ability to care for our fallen warriors is now stronger,” he said.

This entry was posted in Dehumanization, Operation 9/11, Social Engineering. Bookmark the permalink.