42nd Precinct stationhouse in the Bronx. Residents of the precinct were less than shocked last week by quota system allegations. Daniel Beekman

A veteran NYPD cop made waves last week when he claimed his Bronx precinct is ruled by an illegal quota system.

But some residents in the 42nd Precinct have long suspected that stop-and-frisk quotas are being used, they told the Daily News.

Officer Craig Matthews filed a federal lawsuit in which he contends the precinct supervisors set minimum numbers that were expected of each officer in a given 30-day period: 15 summonses, 1 arrest and 2 street stops.

“I believe it,” said Vega, walking near the 42nd Precinct station house. “The cops do it to me all the time. They stop and frisk me. They tell me I look suspicious because I have my hands in my jacket.”

Keith Holloway, 49, agreed. He lives in the Webster Houses, one of several public housing developments in the 42nd Precinct, which includes Melrose, Claremont and Morrisania.

“I see it every day out here, with the stop and frisk,” Holloway said, waiting for a stoplight at Third Ave. and E. 163rd St. “They stop people to make their quotas, so nobody wants to talk to the police…You stop me for no reason – why should I help you?”

The quota system at the Bronx precinct involves color-coded reports that categorize cops by the numbers of arrests, summonses and stops they carry out, according to the lawsuit, filed on behalf of Matthews by the New York Civil Liberties Union.

The names of officers who fall short are highlighted in red ink and the cops are subjected to punishments such as tough shifts and less overtime, the lawsuit charges.

The NYPD has a policy to not comment on pending litigation. However, NYPD Commissioner Raymond Kelly has defended the officer reports, arguing that concrete goals and measurements are needed to manage police work.

“The department would grind to a halt if we allowed every police officer to do what he or she wanted to do,” Kelly said.

But state Assemblyman Eric Stevenson, who represents much of the precinct, called the color-coded sheets a smoking gun.

“Good officers are being forced to do bad things to keep their jobs,” he said, noting that it was 42nd Precinct cops caught on video last month striking and kicking drug suspect Jateik Reed, 19.

The stops were made by precinct officers, as well as housing, detective, and other NYPD units.

“When you have mandatory quotas it means innocent people end up arrested and stopped,” he said. “Quotas destroy police-community relations.”

Roberto Morban, 26, said residents want police protection – and respect. He said the quota charges ring true because local cops seem to make more stops and arrests near the end of each month.

“It makes the kids…want to hate cops,” Morban said. 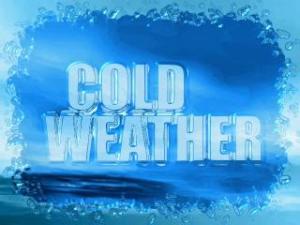 Below average temperatures and above average rainfall has led to this summer being Canberra’s coldest in 16 years.

While the summer average was below normal, so too were maximum temperatures.

Japanese tsunami debris ‘to reach Hawaii in next few days’ 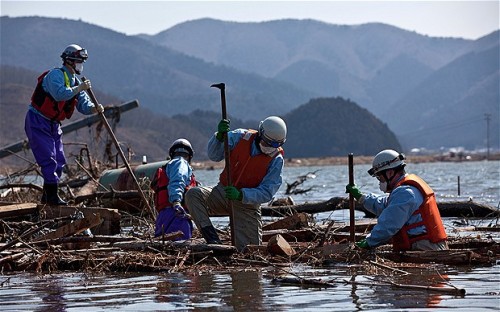 Lumber, boats and other debris ripped from Japanese coastal towns by tsunamis last year have spread across some 3,000 miles to areas halfway across the North Pacific.

The National Oceanic and Atmospheric Administration estimated the first bits of tsunami debris will make landfall soon on small atolls northwest of the main Hawaiian Islands. The rest of the debris was expected to reach the coasts of Oregon, Washington state, Alaska and Canada around 2014.

Debris initially collected in a thick mass in the ocean after tsunamis dragged homes, boats, cars and other parts of daily life from coastal towns out to sea. Most likely sank not far from Japan’s eastern coast.

In September, a Russian training ship spotted a refrigerator, a television set and other appliances west of Hawaii. By now, the debris has likely drifted so far apart that only one object can be seen at a time, said Nikolai Maximenko, a University of Hawaii researcher and ocean currents expert.

Yender said that so far, no debris confirmed to be from the tsunamis has landed on American shores, including large buoys suspected to be from Japanese oyster farms found in Alaska last year. The buoys would have had to travel faster than currents to get to Alaska at that time if they were set loose by the March 11 tsunamis.

Similar buoys have washed ashore in Alaska and the US West Coast before the tsunami, she said.

Yender said there is little chance of any debris being contaminated by radiation. The debris came from a large swath of Japan’s northeastern coast, not only near the tsunami-damaged nuclear power plant in Fukushima. Further, it was dragged out to sea with the tsunamis, not while the Fukushima plant experienced multiple meltdowns.

Nicholas Mallos, a conservation biologist and marine debris specialist for the Ocean Conservancy, said many of the objects in the debris were expected to be from Japan’s fishing industry. That could pose a risk for wildlife, such as endangered Hawaiian monk seals, if fishing gear washes up on coral reefs or beaches.

Maximenko said the dispersion of the debris makes it more difficult to track but no less hazardous.

“In many cases it’s not density that matters, it’s total amount,” he said. “For example, if there’s a current flowing around Midway island, that island would collect debris like a trawl moving across the ocean. It will collect all the debris on its way.”

Ultimately, Maximenko said, tsunami debris will join garbage floating in a gyre north of Hawaii produced by swirling Pacific currents. Much of that trash in a wide area known as the Great Pacific Garbage Patch is bits of plastic, which slowly breaks down into smaller pieces but doesn’t completely disappear.

It was unclear whether large items like refrigerators will make it across the ocean because there has been little precedent for such an event. 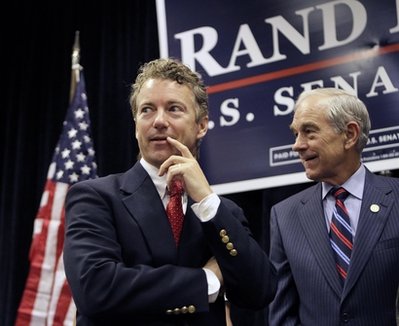 Adding to the speculative frenzy, Rand Paul said last week that “it would be an honor to be considered” by Romney as a running mate.

Over the past week or so, Texas Rep. Ron Paul has been widely accused of being in cahoots with fellow Republican presidential candidate Mitt Romney. But Paul and his campaign say that charge simply isn’t true.

After primary polls closed in Arizona and Michigan on Tuesday, Paul suggested on CNN that Rick Santorum was an “addict of conspiracies” for alleging an alliance. “Some people are much more into conspiracies than others,” Paul said.

“There is no such ‘alliance’,” campaign spokesman Gary Howard told The Daily Caller. “Dr. Paul has on numerous occasions pointed out Gov. Romney’s bad record as he has for each of the candidates.”

The supposed alliance has incited a media frenzy. Many commentators have inferred that such an alliance would be designed to assist the political future of Paul’s son, Kentucky Republican Sen. Rand Paul.

“You have to ask Congressman Paul and Gov. Romney what they’ve got going together,” Santorum said after a Feb. 22 debate in Arizona. “Their commercials look a lot alike, and so do their attacks.”

Adding to the speculative frenzy, Rand Paul said last week that “it would be an honor to be considered” by Romney as a running mate.

Paul’s straightforward denunciation of talk of an “alliance” with Romney might not put to rest the theorizing. On Monday ThinkProgress published an analysis of 20 debates and found that Paul hadn’t directly attacked Romney in any of them — despite attacking other rivals a total of 39 times.

“The other candidates in this race, as Congressman Paul has said many times, represent the status quo,” Howard told TheDC, “something he has fought against his entire political career.”

Adoption in Australia is mostly controlled by state laws, but the report found that the federal government had contributed to forced adoption by failing to provide unwed mothers with full welfare benefits to which a widow or deserted wife would have been entitled until 1973 Photo: ALAMY

An Australian Senate inquiry on Wednesday called for the government to apologise and compensate thousands of unwed mothers who were forced to give up their babies for adoption in the mid-20th century.

Around 100 mothers who gave up babies and adults who had been adopted sat in the Senate public gallery, applauding and weeping as the report was presented.

Unwed mothers were pressured, deceived and threatened into giving up their babies from the Second World War until the early 1970s so they could be adopted by married couples, which was perceived to be in the children’s best interests, the Senate committee report found.

“If it wasn’t illegal, it was unethical,” committee chairwoman Sen Rachel Siewert said.

“The evidence … tells the accounts of mothers and fathers who were pressured into giving up their babies by their families, by institutions – both state and territory and private institutions – by social workers, doctors, nurses and those who they rightly expected to have helped them,” she said.

One of the mothers in attendance, Robin Turner, 61, only wanted public recognition of the injustice she suffered when her newborn son was taken from her at a Melbourne hospital in 1967.

“Acknowledgement. I want the Australian public to know what happened to us,” she told The Associated Press.

Ms Turner said she was 17 when her baby was taken without her consent while she was drugged. Weeks later, she was told he had died. They were reunited in 2008.

She has a copy of the adoption release form which she said is a fraud, with both her typed name and supposed signature misspelt “Robyn.”

“No matter how many sleeping pills they gave me, I would never forget how to spell my own name,” she said.

The seven-member Senate committee began investigating the federal government’s role in forced adoption in 2010 after the Western Australian state parliament apologised to mothers and children for the flawed practices in that state from the 1940s until the 1980s.

Roman Catholic hospitals in Australia apologised in July for forcing unmarried mothers to give up babies for adoption and urged state governments to accept financial responsibility.

Catholic Health Australia, the largest nongovernment hospital operator in Australia and which provides 10 per cent of the nation’s hospital beds, said the practice of adopting out illegitimate children to married couples was “regrettably common” from the 1950s to the 1970s.

Adoption in Australia is mostly controlled by state laws, but the report found that the federal government had contributed to forced adoption by failing to provide unwed mothers with full welfare benefits to which a widow or deserted wife would have been entitled until 1973.

Australian adoptions peaked at almost 10,000 a year in 1972, before rapidly declining. The report found that decline could reflect the availability of welfare, the growing popularity of oral contraceptives and the legalisation of abortion.

Among unwed mothers, adoption rates were as high as 60 per cent in the late 1960s, the report said.

The committee could not estimate how many adoptions were forced but said they numbered in the thousands.

The committee recommended that the federal government make an apology that identifies the actions and policies that resulted in forced adoptions, and that state governments and nongovernment institutions that administered adoptions should issue formal statements of apology.

The report also recommended that the federal government initiate discussions with the states on compensating the separated mothers and children for the harm caused. Siewert said the committee had no advice on how much compensation should be paid.

The government had yet to respond by late on Wednesday.