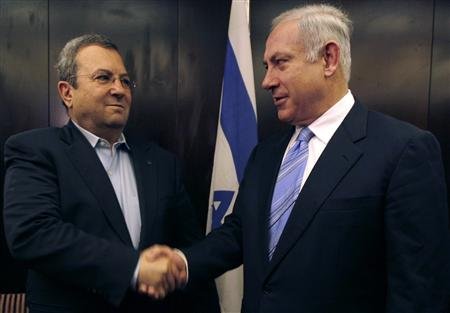 Israel’s Likud party leader Benjamin Netanyahu (R) shakes hands with Defence Minister Ehud Barak before their meeting in Jerusalem in this February 23, 2009 file photo. Forty years before becoming Israel’s top decision-making duo, Netanyahu and Barak first made news on the blood-stained wing of a hijacked Belgian airliner. That mission in May 1972, crystallizes for many Israelis the view that Netanyahu and Barak still today operate as a covert team, crafting strategy with a maverick intimacy born behind enemy lines and a clubby elitism that eclipses their markedly divergent personalities and politics. REUTERS/Ammar Awad/Files

Disguised as tousle-haired mechanics, with slim pistols concealed beneath their white overalls, Israel’s future prime minister and defense chief had stormed the Sabena jet at Lod airport near Tel Aviv as part of Sayeret Matkal, the secret special forces regiment which Barak, then aged 30, led.

Netanyahu, eight years younger, was largely untested in counter-terrorism operations. “It was the first time I had ever held a handgun,” he would later remember.

The dozen or so clambering commandos killed two Palestinian Black September gunmen and overpowered two grenade-wielding women with them. One of the 100 hostages died but the raid was hailed a master-stroke, the only casualty among Barak’s men being Netanyahu, shot in the arm by a comrade – “He took it just fine,” the unit’s then deputy chief, Danny Yatom, recalls drily.

That mission in May 1972, one of the few by Sayeret Matkal on which details have been made public, crystallizes for many Israelis the view that Netanyahu and Barak still today operate as a covert team, crafting strategy with a maverick intimacy born behind enemy lines and a clubby elitism that eclipses their markedly divergent personalities and politics.

The inner dynamics of the relationship resonate widely, as friends and foes weigh up whether they might order an attack on Iran’s nuclear sites. But this powerful odd couple, the old leftist and the right-winger, the ex-commander and his more popular former subordinate, the cool tactician and impulsive visionary, is an enigma, even for those who know them well.

Giving little away, Barak himself told a radio interviewer last week: “There is no difference between us on how we see things … There are always differences on this detail or that, but all in all we see things eye to eye.”

That is quite a statement for a man who, when Labor party leader in 1999, usurped Netanyahu as prime minister after an election where Barak campaigned to halt his liberal assault on Israel’s socialist economic model and seek a deal with Palestinians that was anathema to Netanyahu’s right-wing Likud.

And the portrayal of harmony, now that the shifting ground of Israeli politics has since 2009 brought them together in coalition, belies discernable public differences on Iran, albeit differences of emphasis rather than substance on whether Tehran, for all its denials, is seeking a nuclear weapons capability.

Netanyahu, a conservative ideologue fond of quoting Winston Churchill, casts an Iranian bomb as a second Holocaust in-the-making which must be prevented at all costs. Barak, a famously unflappable and cold-eyed political pragmatist, prefers to portray reining in Tehran as an international challenge and to remind his compatriots of Israel’s regional military supremacy.

Whether the balance of their views augurs a “pre-emptive” attack on Iran, or conversely, a hand-on-hilt resignation to its atomic ambitions, is, constitutionally, for Netanyahu to decide. But his reliance on his former Sayeret Matkal commander has some wondering who really calls the shots on such fateful questions.

“Barak’s status is nothing less than partnership in the prime ministership — ‘Prime Minister II’,” wrote Boaz Haetzni for the right-wing news service Arutz-7, whose contributors are often critical of Netanyahu’s support for his defense minister.

Amir Oren of the liberal Haaretz newspaper argues much of Barak’s support in the wider electorate derives from a belief among voters that he “would function as the ‘responsible adult’ on the Iranian issue and restrain Netanyahu” from rash decisions liable to plunge the region into unbridled conflict and fray Israel’s alliance with its vital ally in Washington.

Yet the idea that Netanyahu is subordinate to Barak, or even on an equal footing, is ridiculed by confidants of both men — including several who served with them in Sayeret Matkal, the Israeli version of Britain’s SAS or the American Delta Force.

Yatom, who was also on the Sabena airliner and later headed the Mossad spy service, acknowledged the lasting bonds forged in combat: “You will always remember your commander as your commander, even if you overtake him later in life,” he said.

But while he did not doubt Netanyahu’s continued esteem for Barak, Yatom told Reuters the latter was fully aware that it was his former trooper who “was the one elected prime minister by the Israeli people, and has responsibility for everything, both successes and failures”.

Other loyal comrades also dismissed the idea that army memories could distort the political hierarchy that puts the prime minister – popularly known as Bibi – firmly on top.

Dani Arditi, another Sayeret Matkal contemporary of the pair, said speculation about imbalance in the Netanyahu-Barak chemistry came from “people with an agenda, who are trying to cast aspersions about the way they function as leaders”.

“Barak has a big effect on Bibi, because he is a serious and accomplished person,” said Arditi, a former Israeli national security adviser. “But in the end, it is the prime minister who will make the difficult decisions.”

Sayeret Matkal was profoundly formative for both men.

Short and boyishly thin, the young Barak seemed an unusual choice for an outfit specializing in unsupported desert forays and long-range lightning raids, the mainstay of the unit before counter-terrorism duties beckoned. But his motley skills, from navigation to lock-picking, an analytical mind and his drive to prove himself distinguished Barak, who eventually became armed forces chief and Israel’s most decorated soldier.

“The skinny youth who was insecure about his physical abilities turned into a brilliant and leading officer,” wrote Moshe Zonder in “Sayeret Matkal”, a history of the regiment, whose name translates as General Staff Reconnaissance Unit.

For Netanyahu, the military was a family affair, making his ascent into its combat elites less out of the ordinary. His dashing elder brother Yoni commanded Sayeret Matkal and was killed leading the 1976 rescue of Israeli hostages at Entebbe, Uganda, taking his place in the pantheon of national heroes.

Conscripted into Israel’s most select and trusted strike force, all three sons were also discharging an obligation to their father, Benzion Netanyahu, a scholar of anti-Semitism to whose hawkish views the prime minister sometimes openly defers.

An upbringing by a historian who gave his sons a sweeping vision of Jewish history and their place in it is seen by those who know him well as vital to understanding how Netanyahu sees the potential threat to Israel of a hostile, nuclear Iran.

Other veterans of Sayeret Matkal recall contrasting styles of leadership from the two men that has been reflected in their political fortunes: the American-educated Netanyahu was more easy going and likeable; Barak, raised on a poor collective farm, zealous to the point of callousness about his men.

For all the controversy his hawkish policies provoke in Europe and the Middle East, Netanyahu’s political standing at home is strong, with approval ratings hovering around 50 percent. Barak has seen his popularity plummet since last year, when he quit Labor amid deepening policy drift and infighting.

At the helm of his new Independence party he may not muster enough votes in the next election to stay in politics. While a business career between spells in politics left him wealthy, Barak now needs Netanyahu if he wants a future with influence.

As a senior adviser to Netanyahu, Ron Dermer, put it: “Netanyahu is unchallenged politically. The differential in terms of political power is so great that it does not factor in. There is a very clear hierarchy. It is very clear who’s on top.”

But he also played down the importance of the two men’s political duels a decade and more ago: “The past adversity between them is, I would say, the aberration,” he said.

“What they have underneath, their shared history in the army, is the bedrock. There is a basic level of mutual respect.”

Supporting that view of a relationship that runs deeper than politics, Zonder, the historian, recalled a Sayeret Matkal reunion in 1997. Netanyahu was prime minister, Barak leader of the opposition. The premier arrived last: “Netanyahu hesitates about where to sit and then finally grabs the free place next to Barak,” Zonder wrote. “Barak leans his elbow on Netanyahu’s knee, a proximity that is a little surprising in its intimacy.”

Dermer dismissed as “psychobabble and ridiculous” the idea that Barak reins in Netanyahu on tinderbox issues like Iran.

But he acknowledged the defense minister does enjoy remarkable autonomy, flying to Washington almost every other month for talks with the Obama administration, whose ties with Netanyahu are testy and which wants more time to see whether international sanctions on Tehran can halt its nuclear work.

The two form a complementary team in handling their key ally. Barak taps reserves of U.S. goodwill from his two years as Labor premier when another Democrat, Bill Clinton, was in the White House. Netanyahu, for his part, enjoys voluble support in an Israel-friendly Congress and might feel more comfortable should a Republican unseat Obama at November’s election.

Wondering if a strategic symbiosis was at work between the two Israelis, as they and their American counterparts balance diplomacy and military threats to try and bend Iran’s will, veteran Israeli columnist Nahum Barnea asked: “Is a division of Labor being created between them, with Netanyahu pushing for action at any price while Barak is keeping his options open? Is Netanyahu with the Republicans and Barak with the Democrats?”

Influencing Washington is a vital part of Israeli diplomacy on Iran. Neither Netanyahu nor Barak makes a secret of preferring that the United States, with its superior arms and global clout, lead any operation against Iran – Israel’s ability on its own to cause lasting damage to atomic plants is limited.

But few would rule out the possibility of Israel going it alone if it thought that was in its interests – and for clues to how its leaders would take such a calculated gamble, many are tempted to look again at their common history in Sayeret Matkal.

The unit’s record of pulling off high-risk, high-yield feats in defiance of convention and caution, might persuade Netanyahu and Barak that taking on Iran is not beyond Israel’s reach.

Then again, the commandos’ doctrine prefers sneak assaults in small numbers, not the mass bombing raids that would be required to set back decisively Iran’s nuclear ambitions.

For some, the drumbeat of Israeli preparation for war has been an indication it may become inevitable. Yet veterans of the secret strike unit that molded the two leaders have many memories of preparing audacious operations that never got a green light from the government and were quietly shelved.

But, as quoted in Zonder’s history of the unit, Netanyahu himself, speaking at the 1997 Sayeret Matkal reunion, reflected on lessons it had taught him about seeing through long-term goals: “There are missions that are scheduled, months or even a year or two in advance,” Netanyahu said.

“There is a certain objective that you home in on, harnessing all of your emotional and other resources to achieving it … And if it’s not achieved, you try again.”

Yet those who fear Netanyahu’s nightmare vision of a nuclear Iran could lead him into starting a war whose outcome would be far from clear might also note the tone of wry, self-awareness in his recollection of the Sabena hostage rescue. It could have gone badly wrong and a string of mishaps during the operation included Netanyahu himself being shot by his own side:

“I have to tell you that all I remember is one thing,” he said. “Getting up onto the plane was easier than getting off.”