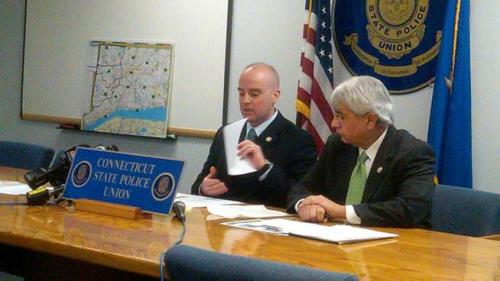 Police Union: “Ticket Blitz” on Thursday. The state police union is bashing what they are calling a push to ticket more drivers.

Union said next “ticket blitz” will be in the Danielson area on Thursday.

The union held the meeting to protest the quotas as illegal under state law.

Leaders of the State Police Union are bashing what they’re calling ticket-writing quotas by management and have revealed the location of the next increased traffic enforcement effort.

Union officials held a news conference in East Hartford on Wednesday and said the next “ticket blitz” enforcement effort will be in the Danielson area all day Thursday.

The union held the meeting to protest the quotas as illegal under state law. They said troopers want to make state roads as safe as possible, but that can be done without quotas and competitions.

The state’s commissioner of emergency services and public safety, Reuben Bradford, determined this week that there was no illegal quota system in place, after Gov. Dannel Malloy asked him to review the matter.

The union is also upset about a state plan to consolidate dispatch desks at three state police barracks into one.

The move would free up more troopers to be on the roads.

State police are consolidating the dispatch desks at three barracks into one, freeing uniformed dispatchers to be out on the roads.

“Specifically, what I want you to understand is we are not closing the troops. We are going to be more flexible with our troops,” according to Col. Danny Stebbins.

He also said state police plans do not include reducing the numbers of troopers at three troops. “Attrition could cause such a move,” Stebbins warned.

Troopers now assigned to dispatch duty are to hit the highways, joining the state police effort to step up enforcement of speed limits, as “revenue generators”, Stebbins said.

State police union leaders say the incentives management is dangling to get troopers to write more tickets is unfair to the public and potentially to union members.

“If we set a goal of say 200 tickets in one day, and then it’s 300, then it’s 350, at some point our concern is what happens to our members that don’t meet their goals?,” said union president Andrew Matthews.

Stebbins denied lieutenants would discipline troopers for not reaching their goals, and he justified incentives as legitimate ways to enhance public safety.

“I don’t want to see our people sitting out there and people flying by ’em so we’re putting them out there with a focus and that’s more of a teambuilding concept than anything else and I think it works well,” Stebbins said.

This entry was posted in Police State Dictatorship, Resistance. Bookmark the permalink.