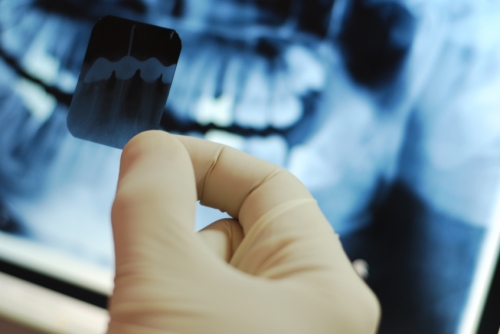 A study published Tuesday in the American Cancer Society journal Cancer reported a link between certain kinds of dental X-rays and the most common brain tumor, one that is almost always benign but can still be debilitating.

The study found at a general level that people with meningioma were more than twice as likely as people without the brain tumor to have had a bitewing X-ray sometime in their life. For a bitewing X-ray, the patient holds the film in place by biting down on a tab.

The exposures to dental X-rays in the study took place in the 1960s, when dental X-rays delivered higher doses of radiation than today’s do. The study compared the self-reported dental X-ray histories of 1,433 adults who had been diagnosed with the tumor with 1,350 who had not.

The study also found an association between the less commonly used panorex X-rays, which are taken outside the mouth and deliver a panoramic view of the full set of top and bottom teeth, and meningioma risk.

Lead author Elizabeth Claus, professor at the Yale School of Public Health and a neurosurgeon at Brigham and Women’s Hospital in Boston, noted that risk factors for meningioma, the most commonly diagnosed form of brain tumor, remain poorly understood, in part because meningioma was only added to brain tumor registries in the United States in 2004.

She added that it generally takes 20 to 30 years after exposure to an environmental trigger such as radiation for meningioma to develop.

The tumor can reach sizes larger than a baseball and can cause headaches, vision problems and loss of speech and motor control.

The American Dental Association recommends that dentists be judicious in their use of X-rays. For patients whose teeth are healthy and who are not at increased risk of developing cavities, the ADA suggests children have X-rays about every one to two years; adolescents, every year and a half to three years; and adults, every two to three years.

This entry was posted in Health & Fitness, Medical Mafia. Bookmark the permalink.