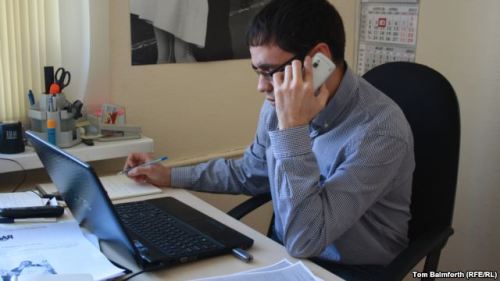 “Finally, society realized that there really is a problem with this,” says rights lawyer Ilnur Sharapov, shown here answering the torture hotline in the offices of Agora in central Moscow.

Two police officers in the southern Russian town of Pyatigorsk took the then-46-year-old mother of two into custody, where she says they repeatedly beat her head, arms, and legs while she was handcuffed.

Isaulova adds that her “glassy-eyed” captors would have tortured her to death if a third police officer had not intervened.

“My skin was scraped off, my hands were all bruised and beaten, and so were my wrists because they hung me up by my handcuffs,” she says. “Then they drove me to the nearby river and said, ‘We’ll smash your head in, plant drugs on you, and throw you in the river and you’ll float away and no one will ever come looking for you.'”

Six years have passed since that day, but there has been no investigation. Isaulova says her appeals have simply been ignored.

Isaulova’s horrific story might never have come to light were it not for a new nationwide hotline based in Moscow that logs cases of alleged police torture and provides legal support for victims.

Isaulova is among scores of Russian citizens who, in the space of three weeks, have appealed to the Agora human rights organization, recounting tales of police abuse — some of them nearly a decade old. Many who are now calling the hotline say they had previously feared filing official complaints or were ignored when they did.

But that feeling of helplessness appears to be changing in the wake of the nationwide anger that erupted over the brutal murder in police custody of 52-year-old Sergei Nazarov in Kazan last month.

Since then, dozens of victims who have kept their grief, anger, and shame quiet for years have been inspired to go public and seek support from organizations like Agora.

Ilnur Sharapov of Agora says police torture has always been prevalent but that the public’s passivity finally reached the breaking point when Nazarov was tortured to death after allegedly being sodomized with a bottle.

“This case was simply so cruel and awful,” Sharapov says. “There was a boil that had long been growing and growing and finally it burst. Finally, society realized that there really is a problem with this.”

Sharapov, an ethnic Tatar lawyer who mans the phone in Agora’s small three-person office in Moscow’s upscale Chistie Prudy district, says he has personally logged 88 concrete cases of police torture. He says he has taken calls day and night from 31 Russian regions — stretching from Sakhalin on the Pacific coast to Krasnodar on the Black Sea to Murmansk in the Arctic Circle.

In a sign of the success of the hotline, Sharapov says four regional law enforcement bodies — in Sverdlovsk, Kurgansk, Moscow, and Krasnodar — requested that relevant information be sent to them.

A Moscow police spokesperson said investigators were “studying the statements” of those who have called the Agora hotline.

If Sharapov establishes that a claim is valid, he requests that victims send him documents and other evidence. If he has time, he gives brief legal consultation himself and then forwards the documents to Agora’s regional lawyers, who take the case from there.

If Agora has no local lawyers in a particular region, they dispatch a legal team on a temporary basis.

This was the case in Sverdlovsk Oblast in the Urals region, where Agora logged 13 accusations of police abuse, according to Dmitry Kolbasin, another Agora employee. The organization is sending a team of four lawyers to the regional capital, Yekaterinburg, to consult with alleged victims on a walk-in basis.

Sharapov says trends are already emerging that illustrate why police abuse is so prevalent.

Russian police officers are required to meet monthly quotas of arrests and detentions, a practice that critics say results in officers forcibly extracting confessions based on trumped-up charges.

“The majority of the people who have come forward said that they were tortured so that they confessed to crimes they did not commit,” Sharapov says.

Local media and social networks are rife with such cases.