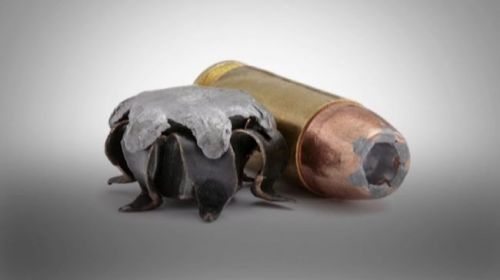 The Army has just ordered its first batch of 9mm Jacketed Hollow Point bullets. But it’s limiting the rounds to its law-enforcement personnel based only in the U.S. and its territories.

So how’s that for a paradox: the Army is buying deadlier bullets for use on American soil, most likely for use against Americans, than it issues to U.S. soldiers waging war in Afghanistan, who use theirs against al Qaeda and the Taliban.

“The 9mm JHP is only used by Army law-enforcement personnel in their law-enforcement role,” an Army spokeswoman told Battleland Tuesday. “This cartridge cannot be used in tactical or combat situations, and is restricted for use to the continental U.S., Hawaii, Alaska, and U.S. Territories.” She added that while the Army has approved the use of such ammo by its internal police forces in 2006, the service just issued its first contract for this kind of bullet.

Army officials decided to allow all its law-enforcement personnel to use it in the wake of several high-profile on-post shootings, including the killing of 13 people, allegedly by Army Major Nidal Hasan, at Fort Hood in 2009. The Army Criminal Investigation Command has been allowed to use the bullets since 1998.

The Army told bullet-makers in February that “the 9mm JHP cartridge is required to rapidly and effectively incapacitate a deadly criminal when the situation warrants the use of deadly force.” Such rounds are widely used by police departments around the country. The Army plans on buying between 500,000 and 1 million of the rounds annually.

Because the bullet’s dented-tip design mushrooms when it hits something – like people – it tends to be more lethal. But at the same time, it’s less likely to pass through a person and wound someone else. “The bullets must also prevent [sic] a minimal hazard to bystanders from excessive penetration,” is how the Army puts it.

“The 9mm JHP shall be used by the Department of Defense (DoD) Law Enforcement Personnel/Body Guards at CONUS facilities,” the notice added. “This cartridge is intended to be used in pistols and submachine guns such as the Sig P226, Sig P228 (M11) and the M9 pistols and the MP5 submachine gun.”

The Army announced April 10 it had awarded a contract add-on for the bullets to the Olin Corp.’s Winchester Division in East Alton, Ill., under the government’s “Only One Responsible Source and No Other Supplies or Services Will Satisfy Agency Requirements” rule.

Army officers and enlistees take an oath to defend the nation against “against all enemies, foreign and domestic.” The oath doesn’t specify different kinds of bullets depending on the location of such enemies. But the use of bullets that “expand or flatten easily in the human body” are banned in war by the Hague Convention of 1899.