It’s not just Big Brother: even his toys are watching

Total surveillance is just another nail in the coffin of civil society. 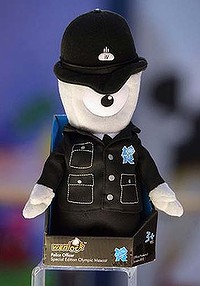 ‘Wenlock, the cute CCTV mascot, becomes a mordant symbol of love, as stern a guarantor of safety as was, in time past, a trade union banner or a crucifix.’

TWO years ago, the London Olympic Committee to smiles all round, unveiled the 2012 Games official mascots, Wenlock and Mandeville – cartoonish aliens, each with one eye in the middle of the head.

The committee couldn’t have been more chuffed, but pride turned to dismay once the public had a chance to react, pointing out en masse that the duo did indeed symbolise London, but only because the creature resembled the city’s most ubiquitous presence, the street CCTV, the beige, rectangular cameras bolted to every street corner, every wall.

The committee had got it right, of course. For most Londoners, the Olympics will be experienced as little more than a series of security crackdowns and prohibitions – on assembly, on free movement, even on public transport use.

The enormous security presence will include licensing of foreign security agencies to deploy operatives and force during the Games fortnight, the promulgation of a host of new laws banning protests anywhere near the stadiums and, most recently, the attempt to introduce legislation to allow GCHQ – the real British spy agency, hidden behind the more visible MI5 and MI6 – to monitor the sender, receiver, date and time of all phonecalls and emails made in Britain, without a warrant.

Supporters of this measure insisted that it was essential for the Olympics. Yet even though protest has now delayed the introduction of the measures until well after the Games, incredibly, they are still going ahead. The crackdown rolls on automatically.

Nor is the process confined to Britain. In the US, a new comprehensive security bill, the NDAA Act, authorises a whole new range of powers beyond the Patriot Act, including the imprisonment without trial of US citizens. There’s random drug-testing of civil servants (Florida), making it illegal to debate whether Armenia suffered a genocide (France), a two-month jail term for some offensive remarks on Twitter (Britain), and on and on.

These initiatives have become so many, self-generating and interconnected that anyone wanting to oppose them has to recognise that some stage of resisting them is over, lost. Something has gone, and it is worth trying to work out what it was and what has replaced it.

What has departed is usually known as liberal society, but it goes deeper than the principles of one political ideology. What has gone is what one might call ”citizen-society”, a society based on a set of beliefs about public life – that speech should be free unless it contains direct menace, for example. But it also involved a host of more particular practices. That of reciprocal recognition, for example – that if a police officer can see you as you go about your law-abiding life, you should be able to see her/him, rather than being spied on. For nearly 200 years in the West, we have in general been on a trajectory towards a more comprehensive citizen-society. Why has it started to reverse with such energy?

The short answer is what for any other matter would be called a long answer – the long answer would take the whole newspaper.

Left and liberal movements in the modern era made it impossible for the state to clamp down for long. But these faltered in the 1970s, and a new type of liberalism, so-called neoliberalism, took over, in which liberty resided in the exchange of goods rather than ideas. Citizens became consumers.

Society became the market. Collective dissent atomised and was treated as criminal, and the most cost-effective solution was to apply technologies of surveillance and control. Sections of the left contributed the idea of behavioural reshaping, from ”offensive speech” to ”nudge” theory, dealing a further blow to social citizenship.

Then came 9/11, and it became possible to connect social control to national defence. Real terrorist threats mingled with wildly exaggerated ones.

Total surveillance was offered not merely as the means but the symbol of social wellbeing. An event such as the Olympics becomes little more than a ritual of security and population management, with sport as a pretext. Believing, with Mrs Thatcher, that there is ”no such thing” as society, we have nowhere to go but technology. 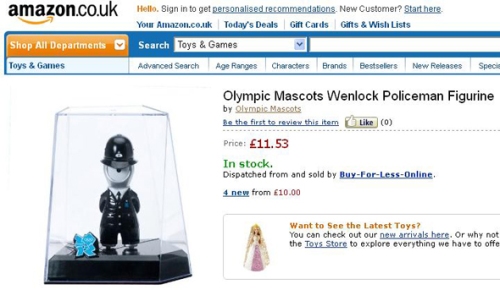 Wenlock, the cute CCTV mascot, becomes a mordant symbol of love, as stern a guarantor of safety as was, in time past, a trade union banner or a crucifix.

When the merchandisers came to offer soft-toy versions of the character, as they did a few months ago, it was inevitable that Wenlock and Mandeville would appear dressed as police officers. What else could they be?

And what answer is there to this deep dilemma, one that increasing numbers now recognise? There is none offered here, and the occasional desperate reprieve – such as the quick-fix delay by which the GCHQ’s total surveillance proposal has been removed from public view – should not be used to hide from the reality of an onslaught.

But the first and most important task in responding to an event is to recognise that it has happened, that what looks like a thousand small defeats is one big disaster.