Will Your Future Be Full of Robot Assassins and Spy Aircraft? 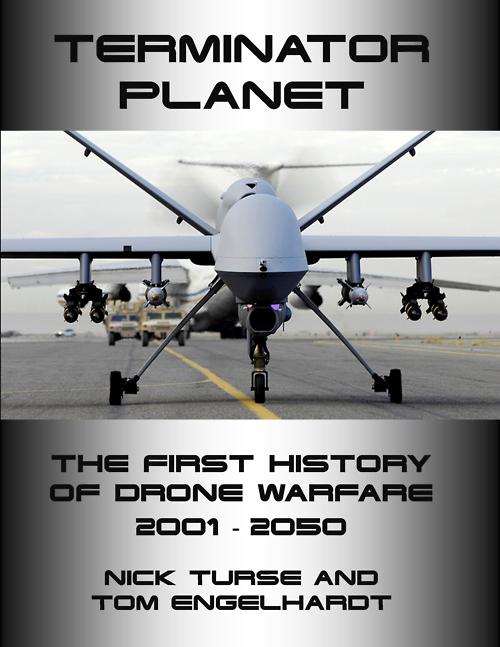 With Its “Roadmap” in Tatters, The Pentagon Detours to Terminator Planet

At the end of World War II, General Henry “Hap” Arnold of the U.S. Army Air Forces praised American pilots for their wartime performance, but suggested their days might be numbered.  “The next war may be fought by airplanes with no men in them at all,” he explained.  The future of combat aviation, he announced, would be “different from anything the world has ever seen.”

Today’s armed drones are actually the weak sisters of the weapons world.  Even the Reaper is slow, clumsy, unarmored, generally unable to perceive threats around it, and — writes defense expert Winslow Wheeler — “fundamentally incapable of defending itself.”  While Reapers have been outfitted with missiles for theoretical air-to-air combat capabilities, those armaments would be functionally useless in a real-world dogfight.

Similarly, in a 2011 report, the Air Force Scientific Advisory Board admitted that modern air defense systems “would quickly decimate the current Predator/Reaper fleet and be a serious threat against the high-flying Global Hawk.”  Unlike that MQ-1000 of 2030, today’s top drone would be a sitting duck if any reasonably armed enemy wanted to take it on.  In this sense, as in many others, it compares unfavorably to current manned combat aircraft.

The Navy’s even newer MQ-8B Fire Scout, a much-hyped drone helicopter that has been tested as a weapons platform, has also gone bust.  Not only was one shot down in Libya last year, but repeated crashes have caused the Navy to ground the robo-copter “for the indefinite future.”

Even the highly classified RQ-170 Sentinel couldn’t stay airborne over Iran during a secret mission that suddenly became very public last year.  Whether or not an Iranian attack brought down the drone, the Air Force Scientific Advisory Board report makes it clear that there are numerous methods by which remotely piloted aircraft can potentially be thwarted or downed, from the use of lasers and dazzlers to blind or damage sensors to simple jammers to disrupt global positioning systems, not to mention a wide range of cyber-attacks, the jamming of commercial satellite communications, and the spoofing or hijacking of drone data links.

Smaller tactical unmanned aircraft may be even more susceptible to low-tech attacks, not to mention constrained in their abilities and cumbersome to use.  Sergeant Christopher Harris, an Army drone pilot and infantryman, described the limitations of the larger of the two hand-launched drones he’s operated in Afghanistan this way: the 13-pound Puma was best used from an observation post with some elevation; it only had a 12-mile range and, though theoretically possible to take on patrol, was “a beast to carry around” once the weight of extra batteries and equipment was factored in.

As for the future, the Air Force’s 2011-2036 Roadmap has already hit a major detour.  In 2010, Air Force magazine breathlessly announced, “Early in the next decade, the Air Force will deploy a new, stealthy RPA — currently called the MQ-X — capable of surviving in heavily defended airspace and performing a wide variety of ISR [intelligence, surveillance, reconnaissance] and strike missions.”

Indeed, the 2011 Roadmap lists the MQ-X as the future of Air Force drones.  In February 2012 however, Lieutenant General Larry James told an Aviation Week-sponsored conference: “At this point… we don’t plan, in the near term, to invest in any sort of MQ-X like program.”  Instead, James said, the Air Force will be content simply to upgrade the Reaper fleet and watch the Navy’s development of its Unmanned Carrier-Launched Airborne Surveillance and Strike or UCLASS drone to see if it soars or, like so many RPAs, crashes and burns.

The Holy Grail of drone ops is the ability of an aircraft to linger over suspected target areas for long durations.  But ultra-long-term loitering operations still remain in the realm of fantasy.  Admittedly, the Pentagon’s blue skies research arm, the Defense Advanced Research Projects Agency, is pursuing an ambitious drone project to provide intelligence, surveillance, reconnaissance, and “communication missions over an area of interest” for five or more years at a time.  The project, dubbed “Vulture,” is meant to provide satellite-like capabilities “in an aircraft package.”

While the Air Force has had a hush-hush unmanned space plane orbiting the Earth for more than a year, much like a standard satellite, the longest a U.S. military drone has reportedly stayed aloft within the planet’s atmosphere is a little more than336 hours.  Plans for ultra-long duration flights took a major hit last year, according to scientists at Sandia National Laboratories and defense giant Northrop Grumman.

In an effort to “to increase UAV [unmanned aerial vehicle] sortie duration from days to months while increasing available electrical power at least two-fold,” according to a 2011 report made public by the Federation of American Scientists’Secrecy News, the Sandia and Northrop Grumman researchers identified a technology that “would have provided system performance unparalleled by other existing technologies.”  In a year in which the Fukushima Daiichi nuclear disaster turned a swath of Japan into an irradiated no-go zone, the use of that mystery technology, never named in the report but assumed to be nuclear power, was deemed untenable due to “current political conditions.”

With the Pentagon now lobbying the Federal Aviation Administration to open U.S. airspace to its robotic aircraft and ever more articles emerging about dronecrashes, don’t bet on nuclear-powered, long-loitering drones appearing anytime soon, nor on many of the other major promised innovations in Drone World to come online in the near term either.

Until recently, drones looked like a can’t-miss technology primed for big budgetincreases and revolutionary advances, but all that’s changing fast.  “Realistic expectations are for zero growth in the unmanned systems funding,” Weatherington explained by email.  “Most increases will be in technical innovations improving application of delivered systems on the battlefield, and driving down the cost of ownership.”

Major Jeffrey Poquette of the Army’s Small Unmanned Air Systems Product Office talked about just such an effort.  By the late summer, he said, the Army planned to introduce more sophisticated sensors, including the ability to track targets more easily, in its four-pound Raven surveillance drones.  Put less politely, what this means is no roll-outs of sophisticated new drone systems or revolutionary new drone technology: the Army will simply upgrade a glorified model airplane that first took flight more than a decade ago.

Sci-fi it isn’t, but that doesn’t mean that nothing will change in the world of drone warfare.

The Terminator films weren’t exactly original in predicting a future of unmanned planes dominating the world’s skies.  At the end of World War II, General Henry “Hap” Arnold of the U.S. Army Air Forces praised American pilots for their wartime performance, but suggested their days might be numbered.  “The next war may be fought by airplanes with no men in them at all,” he explained.  The future of combat aviation, he announced, would be “different from anything the world has ever seen.”

The most salient and accurate of Arnold’s predictions was not, however, his forecast about drone warfare.  Pilotless planes had taken flight years before the Wright Brothers launched their manned airplane at Kitty Hawk, North Carolina, in 1903, and drones would not become a signature piece of American weaponry until the 2000s.  Instead, Arnold’s faith in a “next war” — a clear departure from thesentiments of so many Americans after World War I — proved accurate again and again.  Over the following decades, American aircraft would strike in North Korea, South Korea, Indonesia, Guatemala, Cuba, North Vietnam, South Vietnam, Laos, Cambodia, Grenada, Libya, Panama, Iraq, Kuwait, the former Yugoslavia, Afghanistan, Yemen, Iraq (again), Pakistan, Somalia, Yemen (again), Libya (again), and the Philippines.  New technologies came and went, air strikes were the constant.

In Vietnam, the former Yugoslavia, Afghanistan, Iraq, Pakistan, Yemen, Somalia, Libya, and the Philippines, the U.S. deployed pilotless planes as per Arnold’s other prediction.  From Afghanistan onward, all of the countries that have experienced American air power have also experienced lethal drone attacks — just how many is unknown because figures on drone strikes are kept secret “for security reasons,” the Air Force’s Spires recently told TomDispatch.  What we do know is that drone attacks have increased radically over the years.  “More” has been the name of the game.

Still, barely a decade after our drone wars began, dreams of Terminator-esque efficiency and technological perfection are all but dead, even if the drone itself is increasingly embedded in our world.  Fantasies of autonomous drones and submarines fighting robot wars off the coast of Africa are already fading for any near-term future.  But drone warfare is here to stay.  Count on drones to be an essential part of the American way of war for a long time to come.

Air Force contracting documents suggest that the estimated five Reaper sorties flown each day in 2012 will jump to 66 per day by 2016.  What that undoubtedly means is more countries with drones flying over them, more drone bases, more crashes, more mistakes.  What we’re unlikely to see is armed drones scoring decisive military victories, offering solutions to complex foreign-policy problems, or even providing an answer to the issue of terrorism, despite the hopes of policymakers and the military brass.

Keep in mind as well that those global skies are going to fill with the hunter-killer drones of other nations in what could soon enough become a drone-eat-drone world.  With that still largely in the future, however, the Pentagon continues to glow with enthusiasm over the advantages drones offer the U.S.

Regarding the importance of military robots, for instance, the Pentagon’s Dyke Weatherington explained, “Combatant commanders and warfighters place value in the inherent features of unmanned systems — especially their persistence, versatility, and reduced risk to human life.”

On that last point, of course, Weatherington is only thinking about American military personnel and American lives.  Tomorrow’s drone warfare will likely mean “more” in one other area: more dead civilians.  We’ve left behind the fiction of Hollywood for a less high-tech but distinctly dystopian reality.  It isn’t quite the movies and it isn’t what the Pentagon mapped out, but it indisputably provides a clear path to a grim and grimy Terminator Planet.