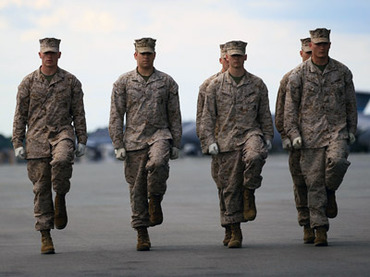 More US soldiers are losing their lives to suicide than from enemy forces, the Pentagon reports this week.

According to findings released on Thursday by the US Department of Defense, the suicide rate for active duty soldiers so far in 2012 is around one per day. In just the first 155 days of the year, 154 soldiers have committed suicide, a statistic only made more ghastly by comparing it to the number of American troops killed by insurgency this year — the website iCasualties.org reports that only 139 US soldiers died in battle this year.

“We are very concerned at this point that we are seeing a high number of suicides at a point in time where we were expecting to see a lower number of suicide,” Jackie Garrick, head of the Pentagon’s newly established Defense Suicide Prevention Office, tells the Associated Press.

In analyzing the report, the AP notes that the suicide rate among active-duty soldiers has plateaued in the preceding two years, creating confusion for researchers caught off guard by the alarming numbers released this week. Even with the Iraq War officially over and the Obama administration promising an expedited end to its military operations in Afghanistan, troops are taking their own lives in shocking numbers. Dr. Stephen N. Xenakis, a retired Army brigadier general and a practicing psychiatrist, explains to the AP that the latest figures aren’t all that surprising to him, though.

“It’s a sign in general of the stress the Army has been under over the 10 years of war,” says Dr. Xenakis. “We’ve seen before that these signs show up even more dramatically when the fighting seems to go down and the Army is returning to garrison.”

A separate study published in 2011 revealed that the rate of attempted suicide among all US soldiers — both active-duty personnel and veterans — is around 18-per-day. Many have suggested that dire economic times awaiting returning soldiers exiting the battlefield have driven many veterans over the edge even after war.

After losing a friend and fellow US war vet to suicide last year, vet Matthew Pelak told the AP, “We know we have a problem with vets’ suicide, but this was really a slap in the face.”

The Pentagon’s latest report takes into account suicide data from the first of the year through June 3, 2012. Compared with the same span of time one year earlier, there has been an 18 percent increase in suicides already; the January-May total, adds the AP, has gone up 25 percent from two years prior.

The tally of those that did take their own life between 2005 and 2009 — 1,100 — comes close to exceeding the number of military personnel killed in Afghanistan in nearly a decade.