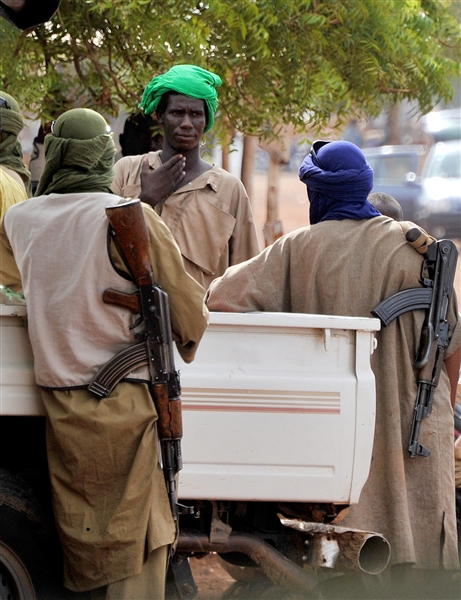 Armed Islamists gather on Sept. 21 in Gao, the biggest city in northern Mali, which is now under the control of armed Islamist groups. Issouf Sanogo / AFP – Getty Images

For many years, the landlocked state rarely bothered the international community. Its growing economy and relative social stability made it an example to some neighboring countries.

But that has changed over the past several months. Today, security officials frequently talk of Mali as being “the new Afghanistan.” They fear that deep inside the country’s northern desert, al-Qaida has carved out a new home — not only a safe haven for terrorists, but a training ground for a new generation of Islamist militants.

The fragile government has lost control of most of the country since President Amadou Toumani Toure was overthrown in a military coup in March, leaving a power vacuum that enabled Tuareg rebels, Mali’s main rebel group, to seize two-thirds of the country. But Islamist extremists, some allied with al-Qaida, hijacked the revolt and then imposed harsh Islamic law in a desert region the size of France.

Al-Qaida in the Islamic Maghreb have benefited from the remains of the Libyan regime, as guns and fighters from Libya have found their way into the country.

The conflict has exacerbated a deteriorating humanitarian and security situation in the turbulent Sahel area — a belt of land spanning nearly a dozen of the world’s poorest countries on the southern rim of the Sahara — where millions are on the brink of starvation due to drought.

The experience of other al-Qaida franchises may have taught the world to act early when faced with a growing threat on a new front. Consequently, military planners around the world are focusing their attention on Mali.

France is becoming increasingly involved behind the scenes, and foreign military intervention would likely follow the example of Somalia, where African forces provided soldiers, assisted by Western resources.

Top-level American and French military leaders and diplomats, including U.S. Assistant Secretary of State for African Affairs Johnnie Carson, began two days of talks in Paris on Monday on intelligence-gathering and security in the Sahel region, diplomats from both sides told The Associated Press. In addition, France will move surveillance drones to West Africa, according to Intelligence Online, quoted by The AP.

One of France’s fears is that because of its history as a former colonial power, it could become a target of the militants.

Although France is likely to take the diplomatic lead among the Western powers, many other countries, including the U.S., appear to be growing more concerned about the terrifying prospect of a lawless Mali upon their domestic security.

Germany’s Foreign Minister Guido Westerwelle said on Tuesday after talks in Berlin with the U.N.’s envoy to the Sahel, Romano Prodi, that he was extremely worried about the situation in northern Mali.

“From the north of Mali you need to cross only one international border and you are at the Mediterranean. If the north collapses, if terrorist training camps spring up and it becomes a haven for global terrorism, this won’t just endanger Mali and North Africa, it will also threaten us in Europe.”

“There will be support from Germany and Europe, it is not about fighting troops but support through the training of an African mission,” Westerwelle added.