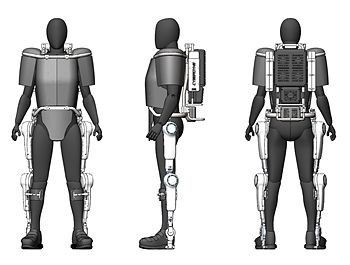 Both the names Cyberdyne and HAL may not be the best names to imply a positive omen for the robotic suit, given the connotation to the Terminator and 2001: A Space Odyssey movies.

Japan-based Cyberdyne unveiled a new, radiation-protected version of its exoskeleton HAL, which is designed to be used for workers at the Fukushima nuclear power plant.

Both the names Cyberdyne and HAL may not be the best names to imply a positive omen for the robotic suit, given the connotation to the Terminator and 2001: A Space Odyssey movies, but the manufacturer says that its improved Hybrid Assistive Limb suit is an ideal fit to provide a human cyborg-type robot assist that can be essential in an environment such as the severely damaged Fukushima plant.

“When a person attempts to move, nerve signals are sent from the brain to the muscles via motoneurons, moving the musculoskeletal system as a consequence. At this moment, very weak biosignals can be detected on the surface of the skin. “HAL” catches these signals through a sensor attached on the skin of the wearer. Based on the signals obtained, the power unit is controlled to move the joint in unison with the wearer’s muscle movement, enabling HAL to support the wearer’s daily activities. […] Not only a ‘voluntary control system’ “HAL” [also] has a ‘robotic autonomous control system’ that provides human-like movement based on a robotic system which integrally work together with the ‘autonomous control system’. “HAL” is the world’s first cyborg-type robot controlled by this unique Hybrid System.”

The new version of HAL was shown at the Japan Robot Week 2012. In addition to the previous power units and exo-limbs, the new version is equipped with a 132-pound vest made out of tungsten to protect workers from radioactive radiation. Since the vest is largely supported by the powered units of HAL, Cybedyne says it has virtually no effect on the wearing person. There is also a ventilation system that prevents overheating and keeps a worker cool inside the suit.

DARPA’s Pet-Proto Robot climbs over and skirts around obstacles