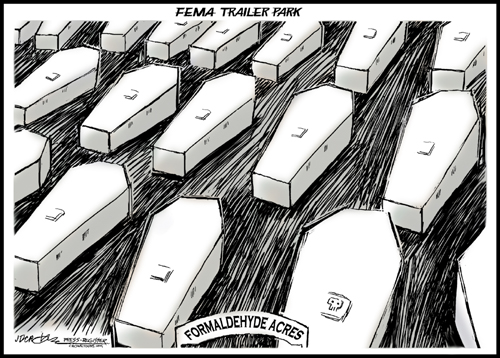 MIDDLETOWN, N.J. — In a sign of how long the rebuilding effort in the Northeast will take, the Federal Emergency Management Agency is shipping in temporary, manufactured homes for displaced residents.

About 317,000 people across the region have registered for FEMA assistance, and an estimated $314 million has been allocated for about 61,000 recipients, mostly for rental assistance. The cost and number of registrants is expected to grow.

At least 110 people were killed and thousands displaced since Superstorm Sandy caused an estimated $50 billion in damage and economic loss from the Carolinas inland to the Ohio Valley and all the way north to Maine. The storm, combined with a nor’easter that knocked out more power and buried recovering cities in snow Wednesday, will be the second-costliest natural disaster in U.S. history after Hurricane Katrina, according to National Weather Service statistics.

The recovery is going slow, particularly in New York and New Jersey. By Thursday evening, more than 735,000 people remained without power in those two states alone.

New York Gov. Andrew Cuomo castigated power companies for their slow response, in particular the Long Island Power Authority and the National Grid on Long Island.  “I believe they were unprepared,” Cuomo said. “I believe the system is archaic.”

In Middletown, where residents evacuated ahead of Wednesday’s nor’easter, Nilsa Colon was back volunteering at a disaster relief center Thursday.

Colon, 42, and her husband piled clothing and food into a van at the Middletown Assemblies of God Church and drove around nearby Keansburg, a hard-hit waterfront town where debris was piled in front of homes and alongside the waterfront amusement park where storm-damaged roller coasters, bumper cars and other rides sat abandoned.

Storm victims are “flooded out and they have no cars. That’s why we’re sending vans in there,” she said.

Colon has been trying to find housing for church members who lost everything. A few people slept stretched across chairs in the sanctuary after the storm. The nearest FEMA assistance center is in Union Beach, about five miles away, and many storm victims lost their cars to flooding.

Colon says she knows FEMA has offered some of the displaced people housing, but miles from their neighborhoods.

“It’s not doable if you put them a mile and a half out. They have to have transportation to their job. [FEMA wants] to offer help, but it has to be helpful to the person,” she said, especially storm victims with children in school who value their community. “They lost their house already; now they’re going to lose everything else.”

About 40 manufactured homes were headed to the region, although no state has requested the homes yet, FEMA said. Where the mobile homes will end up is anyone’s guess.

The states and FEMA work together to determine what kind of homes are needed and where they go. Residents can live in the mobile homes for up to 18 months, according to FEMA guidelines.

FEMA Administrator Craig Fugate said during a Thursday morning conference call with reporters that these are not the same temporary shelters used during Katrina, when some were found to contain toxic levels of formaldehyde. The latest ones adhere to Department of Housing and Urban Development standards, Fugate said.

Since Sandy made landfall Oct. 29, thousands of storm victims found temporary refuge in American Red Cross and Salvation Army shelters. It’s unclear, however, how many will be able to return to their homes anytime soon.

Utility companies have to go door to door to evaluate the damage to equipment and buildings to see whether they can reconnect power and gas. If they can’t, homeowners may need a more long-term solution.

FEMA said 1,600 people are already using the agency’s help to live in motels or hotels. With 107,000 people qualified for similar accommodations, many places could soon be jam-packed if displaced Sandy victims don’t stay with friends or family.

On New York’s battered Staten Island, many victims have left to stay in shelters or with loved ones. In Midland Beach, Norma McCarthy, a mother of two teenage boys, said she remained in her flooded home because her relatives’ homes in New Jersey and Queens also were without power.

“We don’t really have anywhere else to go,” McCarthy said.

She applied for FEMA assistance the day after Sandy hit, but said she hadn’t heard back.

This entry was posted in Disasters, Eugenics. Bookmark the permalink.