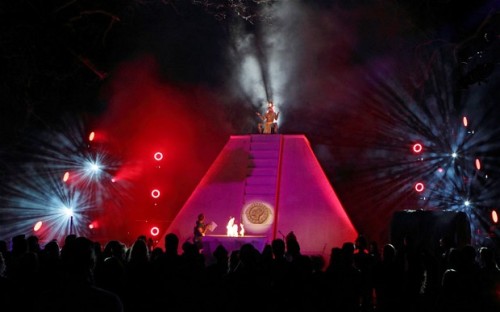 Across the globe there was relief that the apocalypse had failed to materialise and doomsayers, some of whom had partied like it was their last night on Earth, were left scratching their heads.

The dark planet Nibiru failed to knock Earth out of the sky and the promised solar storm never raged. The world is safe and we can breathe again.

The end of the 5,125-year Mayan Long Calendar had triggered predictions of a catastrophic end for mankind, but according to the US Geological Survey it was a “fairly unremarkable day on planet Earth.” There had been about 120 small earthquakes, including a moderate one in Japan, which was “very much a normal day.”

As dawn broke over the Mayan ruins of Chichen Itza in Mexico, thousands of mystics, hippies, druids and pagans celebrated with crystal skulls, ceremonial fires, drums beating and conches blaring when the sun came up.

Genaro Hernandez, 55, an accountant wearing all white and an expression of bliss, said: “This world is being reborn as a better world.”

Mayan Apocalypse: as it didn’t happen

“We are in a frequency of love, we are in a new vibration,” added Ivan Gutierrez, 37, an artist, before a security guard ordered him to stop sounding his conch because he did not have a permit.

In Moscow 1,000 people who had packed into Josef Stalin’s bunker were able to go back home after Armageddon was averted.

Chinese authorities dismissed outright rumours that Jesus had reappeared as a woman somewhere in the middle of the country, and also denied that they had built an “ark” as a contingency plan.

At Pic de Bugarach, the French mountain some had believed to be a place of salvation, the sun came out from behind the clouds and a flock of birds flew past as the official end of the world struck after 11am GMT.

The mountain had been identified as an “alien garage” from where a vast intergalactic flying saucer would emerge to rescue nearby humans.

But the only paranormal activity to be seen was two spacemen in amateur-looking aluminium foil suits, and three green-faced ladies with antennae, ambling down the street.

The spacemen, Frédéric, 28, an unemployed waiter from Marseille and his brother Laurent, 35, said they had dodged gendarmes and spent the night in a cave to get to the mountain, from where they had hoped to be whisked away by an “interdimensional vortex.”

Will Hartley, 26, a photographer from London who also reached the summit at sunrise, reported seeing no UFOs.

Georges Tricoire, 72, a retired local construction worker, smiling from beneath his red beret, said: “For the past 50 years I have wandered over every single inch of that mountain, I know every rock, nook and cranny and everything that has been said about Le Pic de Bugarach is nothing but rubbish.

“Whoever started this rumour three years ago is a liar and all those who have followed him ever since are crooks.”

There had been confusion over the exact timing of the apocalypse, with some suggesting it would take place shortly after 11am, the time of the winter solstice, and others believing it would be at dawn in the Mayan heartland.

But as time zone after time zone reported nothing amiss it became clear that that Earth had been spared.

Modern Mayans, of whom there are six million, had repeatedly said the end of their calendar only meant the ushering in of a new era, not the end of the world. They were able to say “We told you so.”

However, Mexico’s National Institute of Anthropology and History issued a warning. It suggested calculations to synchronise the Mayan and Western calendars may be off a few days, which would mean the calendar actually ends on Sunday.

This entry was posted in 2012 Hoax, Bizarre, Fear-mongering, Useful Idiots. Bookmark the permalink.