No End to Coldest China Winter in 28 Years, Forecaster Says 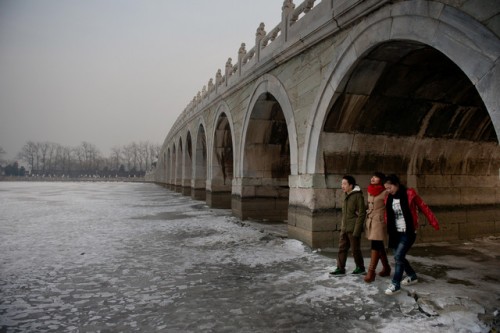 A group of people walk beneath a bridge on a frozen lake at the Summer Palace in Beijing on Dec. 27, 2012. Ed Jones/AFP/Getty Images

Southern China will be hit by a new cold front this week, extending the country’s chilliest winter in 28 years, the country’s weather agency said.

Temperatures in Southern provinces including Guangdong will dip to as low as minus 5 degrees Celsius (23 degrees Fahrenheit) on Jan. 11 and 12, the China Meteorological Administration said in a statement yesterday. Provinces including Guizhou and Hunan may experience snowstorms, it said.

Snow, ice and fog have caused havoc on the nation’s roads and at train stations and airports, according to reports from the Xinhua News Agency and China Daily.

Two people died and 770,000 people have been affected by record-low temperatures and snow in Inner Mongolia in northern China, Xinhua said yesterday, citing the local government. More than 260,000 people are in need of emergency aid and about 180,000 head of livestock have died, according to the report.

More than 10,000 people were stranded at Chengdu airport in southwest Sichuan province yesterday after heavy fog caused authorities to close the airport and ground more than 100 flights, Xinhua said in a separate report.

Fog also reduced visibility to as little as 300 meters (328 yards) at the Kunming Changshui International Airport in southwest Yunnan province, leading to “massive flight delays” since Jan. 3, according to the China Daily newspaper.
Heavy Losses

Four people died and 64 others were injured in three separate road accidents in eastern China yesterday, Xinhua said, citing information from local authorities. Slippery road conditions from persistent rain and snow over the past few days may have caused the accidents, traffic police were cited as saying.

Freezing weather created a layer of thick sea ice on Laizhou Bay in eastern Shandong province, leaving about 1,000 vessels stranded, according to a separate Xinhua report. Aquatic producers in the region may face heavy losses as they can’t penetrate the ice to provide ventilation for sea cucumbers and other fish in their farms, the agency said.