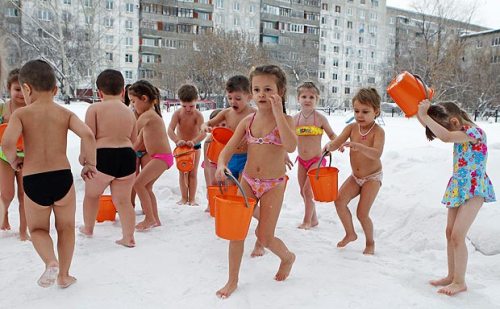 Despite the freezing temperatures in the city of Barnaul, a group of kindergarten children pour freezing water on themselves as part of their daily exercises

IT’S minus 25C in Siberia, but it hasn’t stopped these kids enjoying the great outdoors.

Despite the freezing temperatures in the city of Barnaul, a group of kindergarten children pour freezing water on themselves as part of their daily exercises.

The children, with some as young as two, march into the freezing air and douse themselves with water from plastic pails.

The invigorating exercise is meant to do them good.

The kindergarten director Olesya Osintseva has 18 years experience working with children and believes the brutal regime keeps them healthy.

She encourages them to dress in swimming costumes, rub themselves in snow and frolic in the bitter cold.

And far from seeing it as a punishment, many of the children think it is great fun.

Olesya told The Siberian Times: “Some 18 years ago we gathered together teachers and doctors to speak about our children’s health.

“They were catching influenzas, and there were moments when half of the children attending the kindergarten were unwell.

“It was obvious that something needed to be done to make them grow stronger and be more resilient against viruses.

“This is how we came to the idea of boosting their immunity up by doing this exercise with buckets of chilly water outside in the cold.

“What six months of these water exercises showed was an immediately stronger resistance to illnesses. Our kids were now able to go to the kindergarten and even if someone had infection, they were no longer catching it.”

The children are not forced to join in with the soaking and parents can opt their children out.

Kids who do take part are out in the cold for around 90 seconds when they are encouraged to douse themselves in water and play in the snow.

According to the nursery, which is known as Rodnichok — or Water Spring, doctors confirm the children who do the exercises are more likely to make it through the flu season without illness.

This entry was posted in Health & Fitness. Bookmark the permalink.