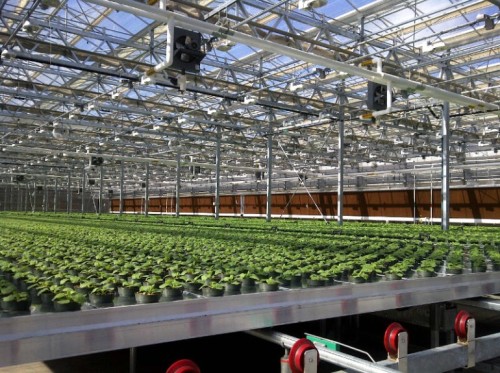 Tobacco plants used in the development of the vaccine

A familiar news topic during the flu season is the difficulties that the authorities face in producing enough flu vaccine fast enough to control the outbreak. That’s a serious enough problem, but when the influenza outbreak turns out to be the start of a global pandemic, then hundreds of millions of lives could be at risk. To combat this, the Defense Advanced Research Projects Agency (DARPA) has developed a new way of making vaccines that has turned out 10 million doses of H1N1 influenza vaccine in a month, in a recent test run.

A globalized world means a world increasingly at risk from pandemic diseases. According to the World Health Organization (WHO), 20 to 50 percent of the world’s population is at risk from a pandemic outbreak such as that seen in the influenza epidemic of 1918. US military forces are particularly vulnerable because the nature of military life is perfect for the spread of disease, unless countermeasures such as cleanliness and vaccinations are constantly employed.

The problem is, vaccines for new diseases can’t be produced quickly. According to WHO, it can take up to nine months to develop and put a vaccine into production. Worse, egg-based and other conventional vaccine production techniques may not be able to scale up sufficiently to meet the demand – especially for diseases where two doses per person are required for adequate protection.

DARPA’s approach to solving this is the Blue Angel program. Started in response to the 2009 H1N1 swine flu pandemic, its purpose is to quickly develop practical countermeasures to disease outbreaks due to either natural causes or biowarfare attack. The program has a number of aspects, such as finding ways to identify people who are infected before symptoms show, but one major facet is the Accelerated Manufacture of Pharmaceuticals (AMP) project.

Working with Medicago Inc., AMP uses tobacco plants instead of eggs to produce recombinant proteins that are key to vaccines. According to the company, introducing viral genes into tobacco has a number advantages: the full-grown plants can be used because the protein is produced in the leaves; it avoids the need to procure eggs in huge quantities; and, there’s no danger of the virus killing the egg embryo. Medicago said that the tobacco process can generate the proteins within 14 days of the gene sequence of the virus being identified, with vaccine-grade proteins generated within four weeks. In the DARPA tests, 10 million doses of H1N1 influenza vaccine were produced in one month, as defined by an animal model.

According to DARPA, third party testing confirmed that a single dose in an animal model produced hemagglutinin antibodies at a protective strength. However, only clinical trials can determine how effective it would be on humans, and the entire process still needs FDA approval.