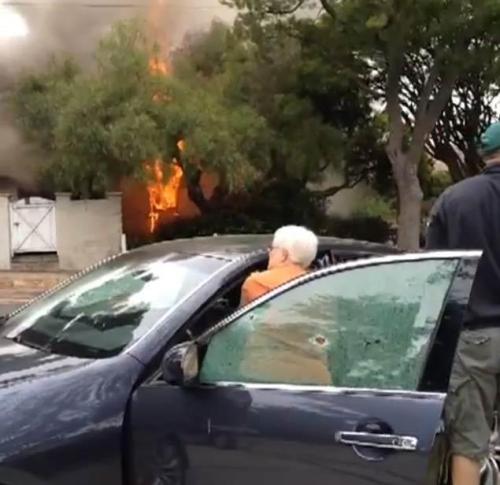 A gunman may have set this house on fire on Friday before heading to Santa Monica College, where he continued his shooting rampage.

The shootings took place just before noon, approximately half an hour after President Obama’s motorcade passed through the area.

A second man described by police as a “person of interest” was taken in for questioning, but no further details were released.

The California college has been placed on lockdown, and the reportedly wounded suspect was found in the school’s library and is now in custody. The Secret Service said that the shooting did not impact the President’s travel schedule.

Nine people have been shot, at least six fatally, near Santa Monica College on Friday.

According to unconfirmed reports, the shootings began during a domestic dispute at a home at 2036 Yorkshire Ave. Neighbors described hearing multiple gunshots coming from the home and saw smoke pouring from windows.

A man dressed in all black and carrying an AR-15 semi-automatic weapon left the home where neighbors said a Lebanese family lived, shot a woman in a black Infinity, and got into the passenger side of a purple Mazda and ordered the driver to head in the direction of the Santa Monica College campus.

The gunman, who witnesses said was dressed in “swat gear,” including a ballistic vest, and was carrying multiple rounds of ammunition, then got out of the car and began firing at passing vehicles, including a city bus and a police car.

The suspect then fled police and ran onto the Santa Monica College campus where he shot one woman, and fired at several students at the school’s library.

“Everyone threw themselves on the floor, screams,” student Marta Fagerstroem, who was on the bus, told NBC4. “The bus driver, she panicked. She couldn’t drive away. She was able to, after a while.”

The college was quickly put on lockdown, and the suspect was shot and killed by police at the library.

Students at the college were in the midst of taking their final exams when shots rang out at the library.

“We didn’t know what was happening until all the students at the entrance of the library started running down towards the bottom of the library,” Santa Monica College student Sam Luster told KABC-TV.

After police entered the building, students were told to crawl on their hands and knees out of the library and several people reported seeing the body of a man dressed in all black lying on the ground. Multiple sources reported that police shot and killed the gunman.

A second man described by police as a “person of interest” was taken in for questioning, but no further details were released.

UCLA Medical Center said that one shooting vicitim died Friday afternoon. One more person was listed in serious condition, and four others had been hospitalized. All of the victims admitted to the hospital were women.

A young mother who was riding on the bus was grazed in the temple by one of the gunman’s bullets, but was alert and responsive as she was taken to a nearby hospital in an ambulance.

Responding to a fire at the home where the incident began, fire officials said they discovered two dead bodies and that both victims had apparently been shot inside the burning house.

Neighbors said that the Lebanese family who lived at the address had recently gone through a bitter divorce and the mother had moved out and assumed custody of at least one of her two sons.

According to witnesses, the shootings took place just before noon, approximately half an hour after President Obama’s motorcade passed through the area. The Secret Service said the incident did not affect the President’s fundraising visit to Los Angeles, but his limousine was re-routed.

Several schools in the area were put on lockdown for several hours, and Santa Monica College cancelled final exams.

This entry was posted in Mass Shootings, Obama, Order Out Of Chaos, Psychological Operations. Bookmark the permalink.